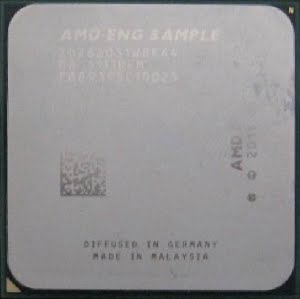 If you want to get your hands on a Bulldozer Processors months before release then take a look at this, The guy over at OBR Blog is selling an AMD Bulldozer FX-Processors which runs at 3Ghz stock clock and comes with 8 Cores. The 3Ghz Chip also offers an Turbo Core frequency which is unknown but as reported earlier would pump up the clocks by 1Ghz at max.

The Chip comes with a Locked Multiplier so overclocking would be limited, The guy has priced the chip for 7000CZK which sums up to US400$. The price is quite high considering the top end FX-8150P when it hits the market would retail around 350US$ however you'll end up with a bulldozer processor months before release. Also the chip is an engineering sample and clocks of the final B2 revision chips may vary.