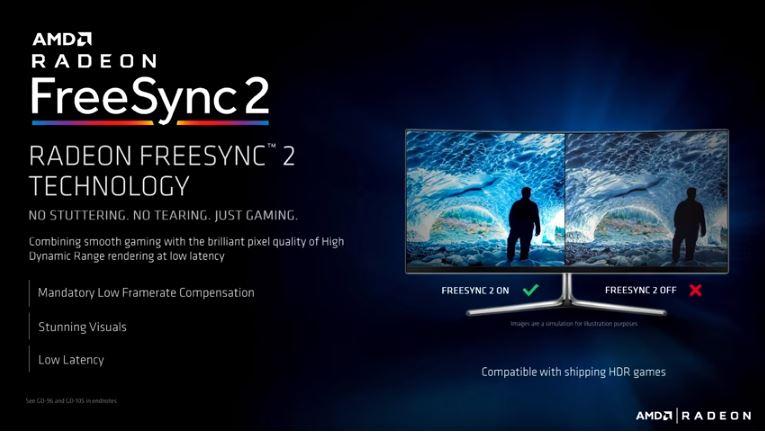 Ryan over at PCPer recently did an interview with AMD where a rep mentioned changes to AMD's FreeSync program. Basically what we saw was the company had found that some consumers are getting confused regarding what features FreeSync 2 delivers specifically over its first-gen counterpart. Since this was an understandable problem,  they have gone the route of renaming the technology to FreeSync 2 HDR conveys the focus on the new feature-set: LFC (Low Framerate Compensation) and the FreeSync 2 HDR fast-lane for tone-mapping improvements.

The AMD rep in question further clarified on what specifications are required for a monitor to receive FreeSync 2 HDR certification: support for at least HDR600, coverage of 99 percent of BT.709 and 90 percent of the DCI P3 color spectrum. Also mentioned that there was a minimum response time, though what the exact value remains unknown to us.

A rather interesting point that we noticed from AMD's change, though, is that this one is more than just cosmetic: AMD's original FreeSync 2 certification program required displays to only be able to adhere to HDR400. TechPowerup covered one of these FreeSync 2 monitors that only supported that standard of HDR 400, instead of the aforementioned HDR600 the company will apparently start enforcing alongside the renewed "FreeSync 2 HDR" program.

Here's hoping for a stricter certification program from AMD in this regard, since HDR400 was a push in itself towards being true HDR and a far cry from some of the HDR 1000 monitors on the G-Sync side. Though with FreeSync 2 already having all the market support and recognition it needs to now start increasing its requirements for quality support instead of mainly quantity. AMD has been successful in market penetration, now is the time to raise the standards so those monitor companies are forced to keep up.