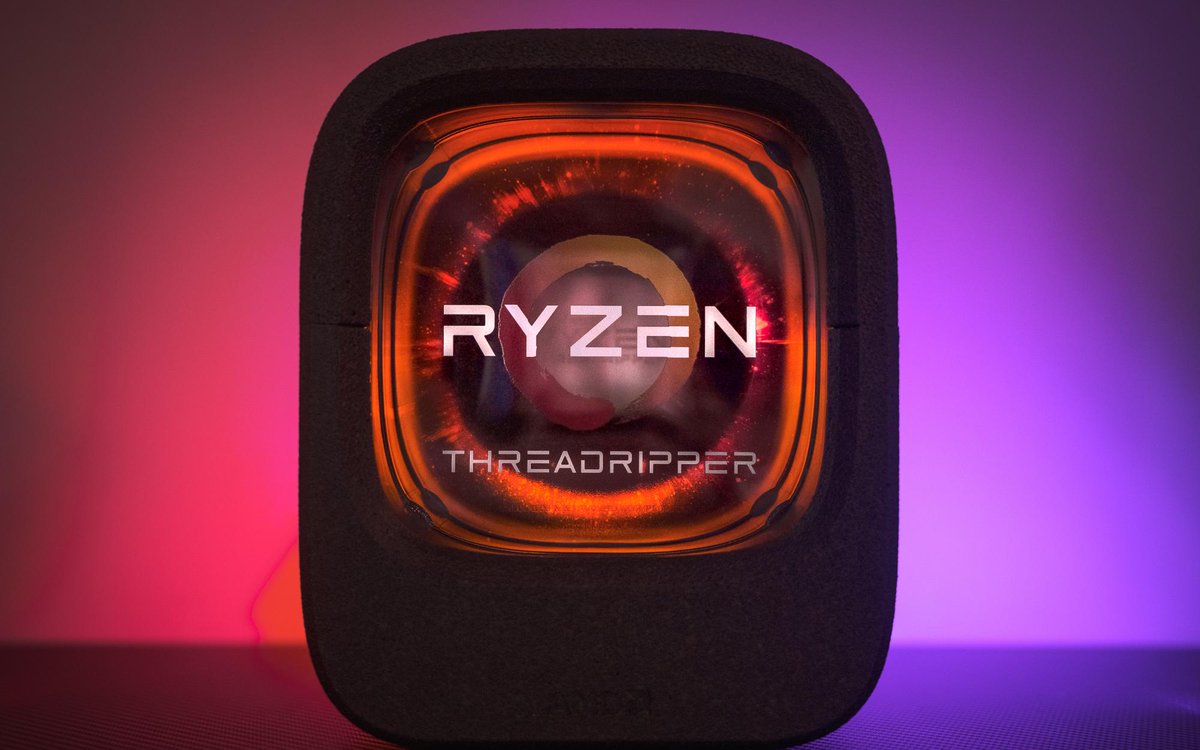 AMD stock plummeted by as much as 20 percent in after-hours trading on Wednesday, and shares have recovered a bit as of midday Thursday. Prices have settled around $19.50 which puts the stock down by over 30 percent from a month ago when shares were north of $32.

Click here for our coverage of last quarter's earnings for AMD.

Below we will take a look at each major segment of AMD, 'Computing and Graphics' and 'Enterprise, Embedded, and Semi-Custom'. 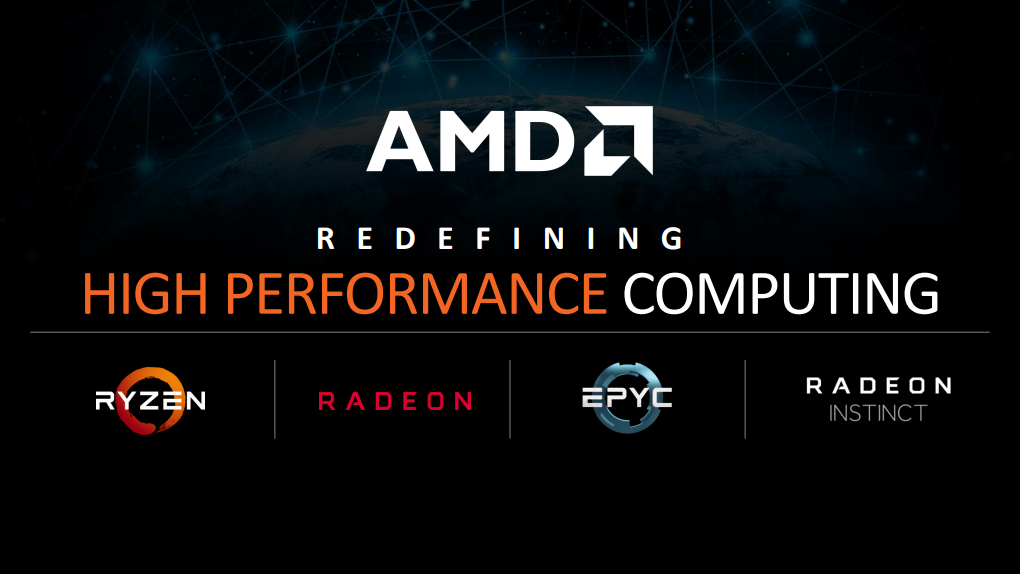 There are two principle takeaways from this quarter's results. First, AMD has finally achieved 40 percent gross corporate margin. AMD CEO Dr. Lisa Su has been targeting this milestone for over two years now and the firm has finally achieved it. Second, crypto demand has finally completed its cycle, from over a year-and-a-half of booming demand, to now a bust. More on that in a bit.

AMD Computing and Graphics – A mixed bag this quarter 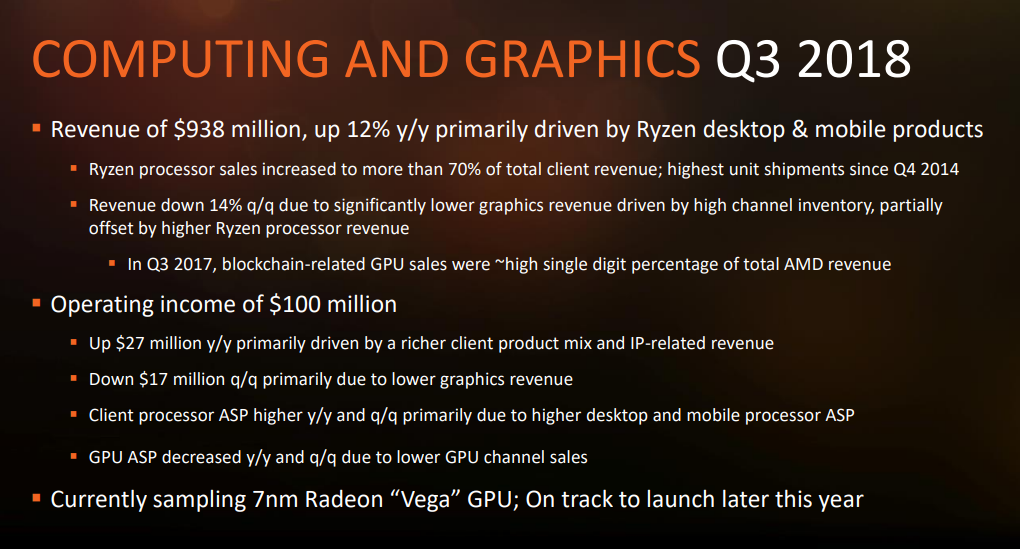 'Computing and Graphics' is comprised of both Ryzen CPU products and Polaris and Vega GPU products. Revenue slipped 14 percent from last quarter but booked a decent gain of 12 percent year-over-year.

Cryptocurrency mining demand has fallen off a cliff. Everyone knew this was eventually coming and its perhaps good for the company that the specter is finally lifted and we know what the damage is. Analysts have been scrambling to estimate just how much AMD (and NVIDIA (NASDAQ:NVDA) gained from the boost in demand crypto's afforded its GPU business, because then, of course, they could estimate what would happen to AMD's numbers once crypto inevitably fell off.

Now we are seeing what that looks like. Unfortunately, AMD does not break out GPU versus CPU numbers for its Computing and Graphics division, but they did call out Q3 2017 where they state, "blockchain-related GPU sales were ~high single digit percentage of total AMD revenue". Most of that is gone at this point and so we are probably seeing AMD's business holistically for the first time in quite a while. As a result, video card average selling price (ASP) has dropped off as unit prices relax in the channel.

On the GPU side, AMD affirmed that it is on-track for 7nm 'Vega' refresh to ship this year. We've previously heard this is for enterprise type GPU products only but of course, consumers are keeping their fingers crossed.

Now on the flipside, Ryzen is doing very well. We reported on CPU market share numbers just last month and the Ryzen family of products seems to be gaining traction.

AMD says Ryzen processors sales are more than 70 percent of total client revenue, with unit shipments the highest in four years. These products are also driving AMD to higher gross margins, something the firm has struggled with for years after being forced to discount its heavily maligned Bulldozer SKUs to move any volume. Its slightly more impressive that AMD has hit 40 percent margins despite lower video card ASP working in the opposite direction.

AMD is finally asking for more money for its products and consumers are saying yes. 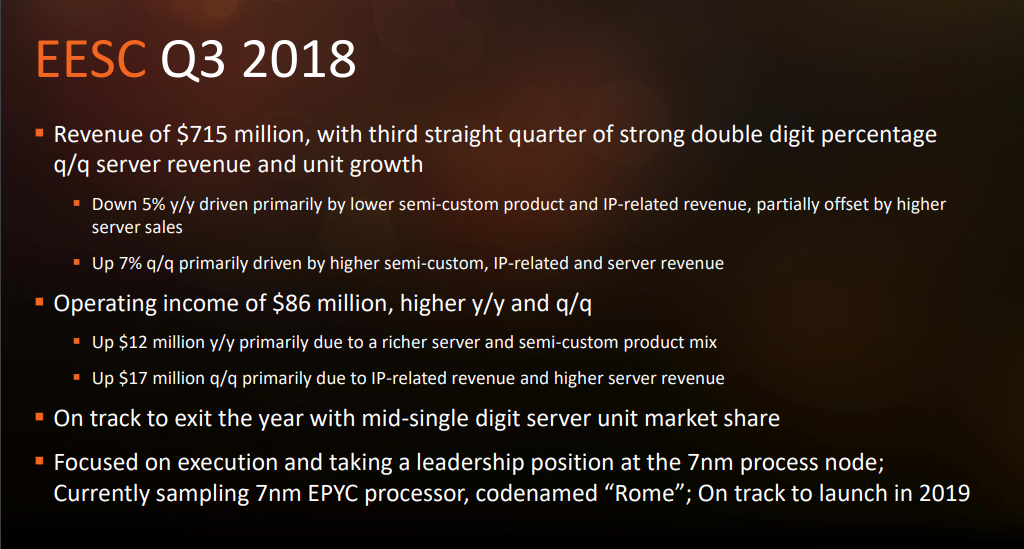 AMD's enterprise and custom division was also a mixed bag of results. The current generation of consoles are both several years into life cycles, and even the refreshed systems are a year (XBOX One X) or two (PS4 Pro) old. Revenue from these sources will continue to sag until we see the next generation of consoles expected in a couple of years.

The fundamentals are looking good for the division. This time last year the firm was raking in extra revenue from the newly released Xbox One X which utilized a rather powerful AMD APU that AMD probably was able to charge a decent sum for. That console has been out for a year and so demand has surely dropped, yet the group is still posting quarterly improvements, helped by the slow and steady adoption of EPYC parts.

AMD is laser-focused on the data center as its targetted high growth market. 14 nm first generation EPYC parts were never expected to really penetrate the market. AMD wanted to prove that it could compete here and first-gen EPYC has done just that.

However, Intel (NASDAQ:INTC) still has the market almost all to itself. AMD discussed its plans for an aggressive roll-out of 7nm 'Rome' EPYC parts on track to launch in the first half of next year. These products are expected to slash energy requirements while further uping core count with an instruction per clock and frequency boost to boot.

That couldn't come soon enough as, despite a competitive EPYC offering that's been on the market for over a year now, the division's revenue slipped 5 percent from the same quarter a year ago. Server CPU market share is crucial as a new wave of consoles won't come for several years to bail out the division, and AMD expects to exit the year with "mid-single digit" market share in this space. While not stunning, its certainly better than the <1% market share it had before EPYC came around.