I am a solid supporter of the DIY ideology in PC builds and consider pre-built systems like these slightly less then a rip-off. However, I just couldn't stop myself from publishing this particular Alienware reveal. The Area 51 introduces very impressive aesthetics and an absolutely insane amount of GPU - CPU horsepower for a fully 4K Ready gaming experience. Ofcourse, you can make a similar build for considerably less the price, but if you have got money to burn and want the best your gold can buy than this is for you. 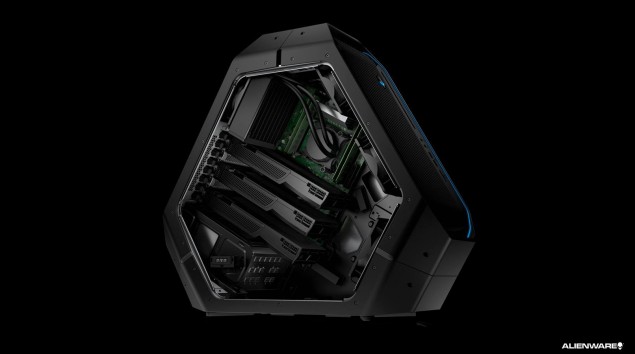 Usually I wouldn't suggest anything past an over clocked Intel i5 to PC builders who strictly want to game, but I actually don't dispute Alienware's decision to go with Haswell-E processors even though they are not really meant for gaming. Normally a simple over clocked i5 is enough, and by normally I mean single GPU rigs. Once Multi GPU configurations enter the scene, things start to go pretty south. To those of you who don't already know this, a GPU is entirely dependent on the CPU for 'orders' which is why a single i5 suffices for a single GPU configuration. However, triple the GPU literally means triple the 'orders' for the CPU to dish out, which is why unless you have a very powerful CPU, your multi GPU configuration can get bottlenecked. In this case, the Area 51, which is of course completely configurable to the customer's needs can support a maximum of 3 GPUs, in which case you would most certainly need as much CPU power as you can get. This is one of the primary reasons low level APIs like DX12 and Mantle are so important to reduce costs.

Anyway, here are the maximum specs of the Alienware Area 51 (2014). I think one of the major reasons why I am posting this is because the I am absolutely loving the style of this thing. The chasis called the "Triad Chasis" is a simplistic triangle design that features an interesting airflow schematic. The Area 51 will feature liquid cooling and you can either opt for a 6 core or an 8 core CPU. This will ofcourse be the Haswell-E series, which consists of the i7-5820K, i7-5930K and i7-5960X. This is coupled with an X99 chipset and DDR4 Ram (upto 32GB) for increased bandwidth and lower power consumption. Now I am not really sure how much all of this will cost but I am pretty sure it won't be easy on the wallet, at all. Not even remotely. Actually your wallet will probably stop existing. Alienware is set for the full reveal in a few days.

If there is one thing @Alienware gets right, its style. http://t.co/xpdvv6iUSO