The short answer to that question is a resounding and, perhaps surprising, yes, because it can certainly play GTA V. Though to what end? What kind of graphics options can we have on while maintaining good performance. What about achieving 60 FPS? Let's take a look at what it can really do. 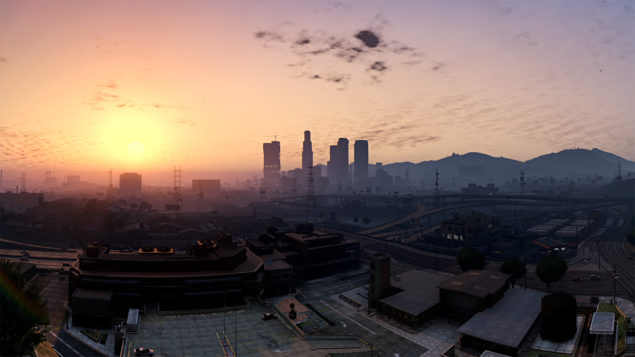 The Alienware Alpha is actually pretty competent at  GTA V

GTA V is a monster in terms of its graphical prowess. The number of options on the PC version arrived unexpectedly and were both a source of woe and excitement. You mean we really do have all these fantastic options to play with to fine tune our performance? And there's a even a measure of graphics memory consumption? Yeah, it's quite the nice surprise.

The problem with the Alienware Alpha is not that the seemingly underpowered components can't handle the higher settings because of any raw performance issues, but that there is a lack of dedicated graphics memory to support turning everything on. GTA V absolutely loves video memory, and having everything on will consume a large amount, even at 1080P.

As I'll show you, the hardware can do it, but it can't put everything in memory to do so. The performance is adequate, but some scene elements seem to have a delay when showing up on the screen with the lack of dedicated memory. Those things are rendered and the work has been done, however, they're just missing for a few seconds as they get swapped into video memory and thus onto your screen.

Does this mean that we can't ever see beautiful visuals on the Alienware Alpha? Not really, actually. It just means that you'll have to be mindful of the settings you turn up and the ones you keep moderated. The two largest memory hogs in GTA V are the texture quality and AA settings. Limited video memory means you just can't have the texture quality up all the way. In fact, I found that the 'Normal' setting was about nominal. Moving it to 'High' shot up memory usage exponentially, and 'Very High' even further.

All benchmarks are completed using the in-game benchmark utility and placing the results into an excel spreadsheet. All memory usage data was gathered using HWiNFO64.

The Alienware Alpha tested is the base model with the following specs:

First of all, let's show you what it can do. And it can do a lot more, in fact, but these are the settings I found to be the most playable with the best actual in game experience with little performance issues is to have no AA, and 'Normal' settings all around at a resolution of 1080P. Shadows were set to NVIDIA's PCSS and Anisotropic filtering was x16.

Despite the awful minimum FPS that it presents, the average clearly shows that performance is relatively steady. More than that, when actually playing the game it feels great. No, it's not at the most gorgeous and mind blowing visual settings, and it won't wow you like having a dedicated PC with triple Titan X's or 290X's, but it works, and it plays well. If you enjoy gaming for gaming and not nitpicking visuals, then it works more than well. It's fun.

Now, let's take a look at the memory usage during this run. How much memory actually is being used? For this, I ran HWiNFO64 in the background to capture the data.

Quite honestly that's pushing the limits at nearly 69.5% of total. And only at the 'Normal' texture setting. Because the usage is below 100% of maximum and it's relatively stable, we can assume that there is no swapping being done and no system memory being used. Not horrible by any means, and GTA V doesn't look so bad at all at these settings!

Now let's look at what happens when we turn everything up to maximum. To be a little more realistic, I set MSAA to 2x and reflection MSAA to 2x as well, everything else was at its absolute maximum, either 'Very High' or 'Ultra' where applicable.

I think pass 0 is a bit of an anomaly. I'm not sure why the FPS would be higher than on lower settings, but we can disregard that one. The best representation of the game is in the last pass, where there is more action happening. And explosions, because explosions are great. While watching the benchmark, it did seem to have it's share of slowdowns, but overall the scenes played out relatively stable. I wouldn't call it playable in the real game, but the performance isn't so bad. In fact, those numbers represent far better performance than I anticipated. I though the Alienware Alpha would be completely destroyed by these settings.

You won't have enough VRAM to play 4K, so those benchmarks are a useless venture. But 1440P might be a viable option on this little box of wonder. Well, if we turn up all the settings to their absolute highest, then it might bring the machine to its knees.

That's actually a bit surprising. The Alienware Alpha manages to provide an adequate experience where the maximum is beyond the cinematic 24 or 30 FPS. But the average tells a different story, meaning that while there are moments of lucid quickness, the game plays rather slowly. The good news is that it seemed to be 'smooth', for whatever that's worth. But no, 1440P with everything turned up is not a good idea, and it won't make for a good gaming experience. You're better off with 1080P.

The low usage in the beginning is because GTA V takes some time to load, so I didn't start the benchmark as quickly. But the VRAM usage is most certainly near the maximum. And the relatively less stable usage tells me that there is a bit of swapping going on in the background. Large graphical elements are making their way from system memory into VRAM, causing spikes in usage. That might be a reason for the less desirably performance, then. 1440P, while fantastic, is not the Alienware Alpha's forte. It's not horrible, and you can play it, but it's not ideal.

What can we conclude?

The obvious answer is that GTA V is more than playable on this little un-intimidating machine. What we can't do is put everything on maximum and play at 4K and beyond. But is that really necessary to actually enjoy a game? Do we need all the goodies turned on to enjoy the experience? Perhaps for some, and that's alright. I'll admit that I enjoy turning the graphics up to maximum and enjoying the scenery.

But when I'm actually interesting in playing a game, none of that matters. At all. I enjoy the gameplay, story and other elements. And what we can do with the Alienware Alpha is actually quite surprising. We can play GTA V at 1080P with a good deal of graphical fidelity at a very great average framerate. And it plays well.

The Alienware Alpha is indeed limited by it's VRAM, but that doesn't mean it can't still be an effective and fun box to use. The experience still rivals its console brethren and is, quite frankly, a far better experience than I would have expected.

But remember, the Alienware Alpha is obviously not marketed towards everyone, and the hardcore PC crowd need not apply. But for those entering the PC market or that need low power and relatively good performance, then this magical black box can provide that experience you're looking for.