AdBlock Plus For Android Phones and Tablets Now Available (Download)

Finally there is some great news for AdBlock Plus extension fans with Android devices. As per our latest findings, the Adblock Plus for Android is now readily available in Google Play store for your download pleasure.

According to the developers of Adblock Plus for Android, the app installs natively on any compatible Android phone and filters traffic according to your set preferences. In case you have root on your Android phone or tab, then the AdBlock Plus will filter web based traffic without any tinkering whatsoever. However, for users who still don't believe in the awesomeness of rooting their Android device, the app is supposed to filter all wi-fi web traffic. However, for this to work, you will need your phone or tab to be on the Android 3.1 Honeycomb variant. 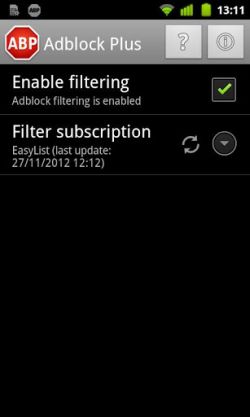 In case you don't have root on your Android phone and you are on Android version older than 3.1 Honeycomb, then you will need to configure AdBlock Plus as a proxy server manually. However, there are a myriad of Android devices that do not support proxy servers and for those, it is time now to update.

For those who are unaware, Adblock Plus is a famous web-extension that has been helping millions of web users fight the contextual, flash, banner and link ads. According to the developers of AdBlock Plus, the app blocks mobile advertisements, in-app ads, notification area ads, HTML 5 ads etc. 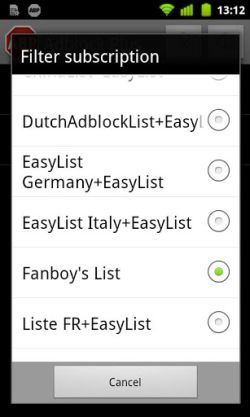 However, it is essential to understand that the developers who bring you free apps only have in-app ads to monetize their apps. We'd like to encourage our respectable readers to make the right and ethical decisions regarding free apps and their usability themselves. However, stopping the notification drag-down bar ads is something I personally support as it seriously hinders a perfect Android experience.

How to get AdBlock Plus for Android? Simple! fire up the Google Play Store on your Android phone / tab and search for the app followed by downloading it. You can also sideload it on your Android device by following this link [Google Play Store]. In case you want to setup a proxy server in order to deploy Adblock Plus for Android, head to the official Adblock Plus proxy setup instructions provided here.

Although, the app should start auto filtering ads from web traffic once you install it. However, if things aren't heading as planned or claimed, please head to the official AdBlock Plus configuration page posted here.