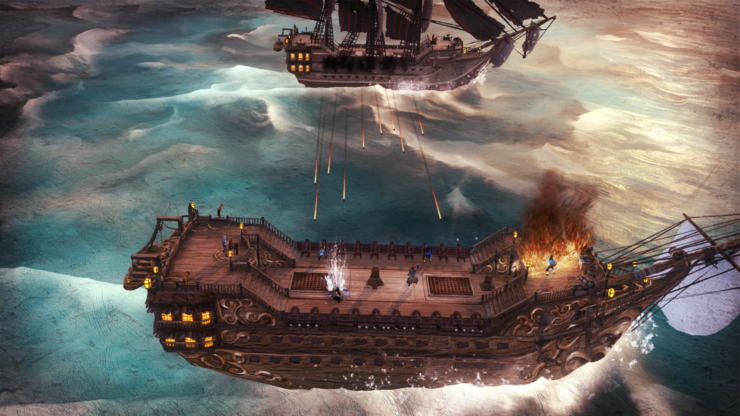 UK based developer Fireblade Software will showcase Abandon Ship for the first time at the PC Gamer Weekender 2017, hosted on February 18-19th, 2017 at Olympia London.

Abandon Ship is a single player game inspired by the likes of FTL and Sunless Sea. Set in a fantasy version of the 'Age of Sail' setting, it features a procedurally generated world filled with quests and random events that can "drastically change the environment"; players will even have choices that will have an impact later in the game, for instance having previously made friends or enemies along the way. The art style has been modeled after classic Naval Oil paintings.

While death is permanent, Abandon Ship allows fellow captains to do just that - leave their vessels to fight another day. This can be done by escaping via lifeboat, but even when stranded you still have a fighting chance to make it out alive.

There are no further details on the game right now, though you can always add it to your Steam wishlist in the meantime. The PC Gamer Weekender 2017 is going to have several other games showcased anyway, including Sniper: Ghost Warrior 3 by CI Games, Halo Wars 2 by Microsoft, Little Nightmares and Tekken 7 by Bandai Namco, Killing Floor: Incursion and Rising Storm 2: Vietnam by Tripwire Interactive, and Mirage: Arcane Warfare by Torn Banner Studios. More will probably be announced as we get closer to the event.

You can buy a ticket for the PC Gamer Weekender 2017 right here.