Murdered Soul Suspect is  going to be another criminally under looked game because of having a release date that is victim to the long shadow of Ubisoft's latest title, Watch Dogs. The game comes from the studio that also gave us Quantum Conundrum, which was another sleeper hit. Murdered Soul Suspect was a game that showed a lot of promise and potential but once again has the Square Enix curse of a bad release date. For now, you can definitely consider this IP dead and buried and have little to no hope of a sequel. 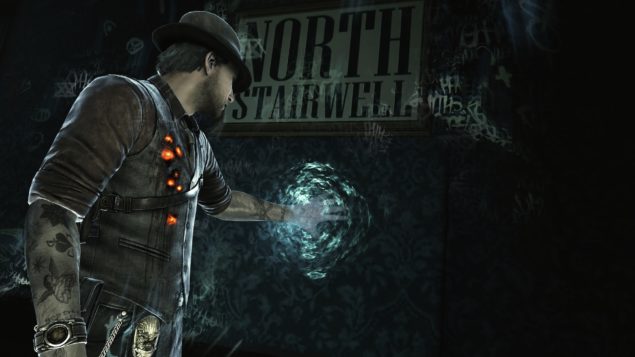 Murdered Soul Suspect is a game that reminds me of Ghost Trick on the Nintendo DS, it was a game that offered a protagonist who wants to find out who killed him and why, while the concept may sound cliche it is rare in the world of video games. Murdered Soul Suspect had a good share of ARG around it to help create hype but at the same time didn't take enough opportunities to promote or make a presence in the market for the players to dive into. While it is sad that this game will never make good numbers in sales, I can only hope that this idea doesn't die as easily as this games potential for a sequel.

The first 40 minutes of the game have made their way on to the internet, even though the game is still a couple of days shy from its street release, the video was originally uploaded on May 31st. It shows the first 40 minutes of the game without voice overs or commentary, so if you are on the fence on whether to buy the game or not then the video is definitely worth watching, The game is an amazing combination of L.A Noire style investigation meets Ghost Trick mechanics on the console.

In other news, the development studio behind this game and Quantum Conundrum, Airtight Games, has officially shut down according to element on NeoGaf. The company is physically there but there aren't any employees to run it. Which is quite a shame considering the game REALLY is a dream come true for murder mystery investigation game fans such as myself and all those who enjoy unique mechanics to help develop interest in the game. Considering one of the members of the studio consisted of a Valve veteran it is a shame to see such talent have gone to waste.

What do you think of Murdered Soul Suspect? Is there any hope for the IP and other similar endeavors of it ever surfacing again in the gaming industry? I am truly disappointed that this game is going to set a precedent that these kind of games aren't in "demand" and we will continue to see repeated IP's dominate the market.