The folks at Digital Foundry are considered to be the foremost experts when it comes to the technical analysis of videogames.

Today they've posted their own analysis of Redout: Lightspeed Edition and their findings pointed out to an Xbox One X version rendered at 1080p, which induced a significant amount of outrage against 34BigThings as you can see in the images below, particularly because the PlayStation 4 Pro version of the game currently renders Redout at a more stable framerate compared to Xbox One X. 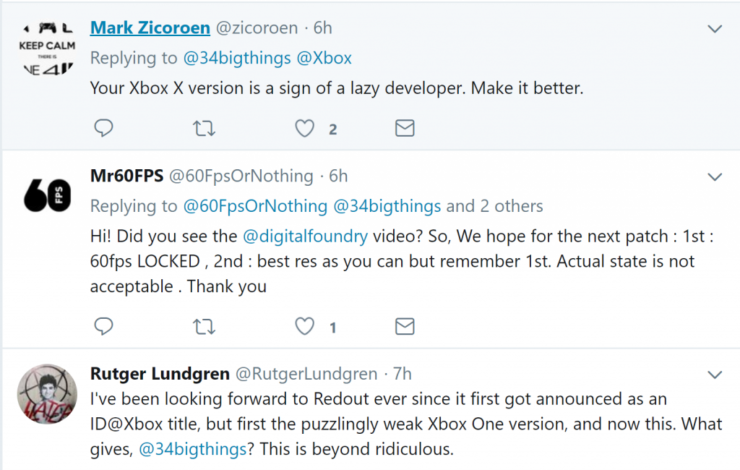 We were able to speak with CEO Valerio Di Donato, who categorically denied Digital Foundry's analysis. We can exclusively present you the response via press release that's due to be published soon.

Nicest part of a cloudy saturday morning? Waking up to a shitstorm raging upon you, based on what we can call incompetent technical analysis at best, fake news at worst.

Digital Foundry might have been a competent source of technical information in the past, but it might be currently going down to the click-baiting path. They just published an opinionated video on our game, Redout, in which they talk about Xbox One X performances, framerate and resolution, mentioning over and over that Redout shows a 1080p rendering for the Xbox One X version.

This is a pure, straight lie. The Xbox One X got an enhancement update a couple of weeks ago which brings 4k rendering with dynamic resolution scaling to everyone (owners or not of 4k TV). More specifically, we managed to scale the resolution between 90% and 50% of native 4k, which means the resolution goes from the upper limit of 3456×1944 to the lower one of 1920×1080 [confirmed also by VG Tech]. More technical details on this will follow in the next days, when everybody will be back from holiday vacations but meanwhile let us spell it out: it’s not 1080p.

As many users reported, there are still some framerate hiccups where the game can’t keep the 60fps pace and significantly drops below the 45+ threshold, which is something we are aware and very sorry of. This happens more frequently where many AI opponents are factored in, while it’s close to nonexistent on time attacks, solo races and races with few opponents. We are aware of these issues and we’ll keep working on those as long as possible.

But saying that Redout renders at 1080p is plain false. This, combined with the fact that some players seem to be highly sensitive to the XBox vs. PS4 performances tug-of-war, caused a rain of negative comments on our heads, all based on wrong information.

We are currently looking into legal action to defend our public image. Not only because we dislike being called lazy or incompetent gratuitously, but also to send a message to the players and the industry. Gamedevs (indies especially) are amongst the most hard working people, to the point that burnout and crunch culture in game development are widespread. Really, just stop calling them lazy to the first hiccup. And don’t fabricate excuses for calling them lazy. Ok? Thank you.