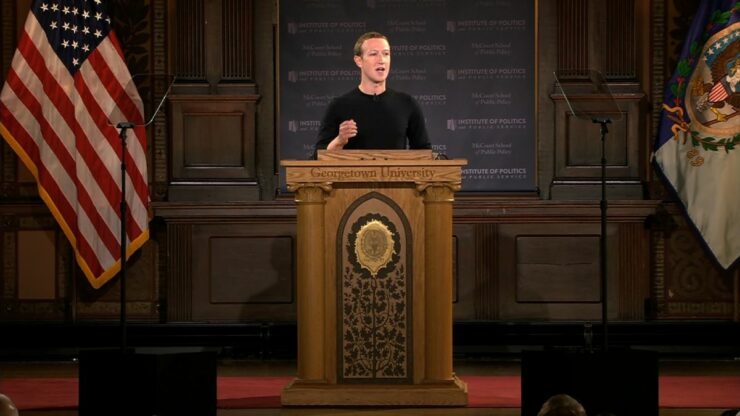 Facebook CEO Mark Zuckerberg has been on a free speech tour after audio clips of an internal meeting was leaked through The Verge revealing his intent of fighting the US government and going "to the mat" if anyone tried to break the company. Today, Zuckerberg held a talk at Georgetown University where he justified why the company wasn't banning outright false ads by bringing free speech to the argument.

However, none of that is new. Since the Cambridge Analytica scandal, Facebook has failed to take any significant steps towards transparency or cleaning up of its platform and has simply engaged in a boatload of marketing Newspeak and PR tripe. As just one example, the company blocked ad transparency tools developed by the media platforms, nonprofits and volunteers that enabled Facebook users to see how ads were targeting users. ProPublica, Mozilla and Who Targets Me all saw their tools stop working in January this year after Facebook blocked them. "Investigative groups like ProPublica need access to this information in order to track and report on the opaque and frequently deceptive world of online advertising," Sen. Mark Warner had said at the time (via ProPublica).

What is new today, however, is Zuckerberg publicly whitewashing Facebook's origin story from a hot-or-not campus site at worst and a stolen idea at best to a noble goal that the young visionary had of giving people a voice during the Iraq war.

In today's Georgetown talk, Zuckerberg completely revised the Facebook origin story, portraying himself as an altruist who wanted to give people a voice. He said:

When I was in college, our country had just gone to war in Iraq. The mood on campus was disbelief. It felt like we were acting without hearing a lot of important perspectives. The toll on soldiers, families and our national psyche was severe, and most of us felt powerless to stop it. I remember feeling that if more people had a voice to share their experiences, maybe things would have gone differently. Those early years shaped my belief that giving everyone a voice empowers the powerless and pushes society to be better over time.

Back then, I was building an early version of Facebook for my community, and I got to see my beliefs play out at smaller scale. When students got to express who they were and what mattered to them, they organized more social events, started more businesses, and even challenged some established ways of doing things on campus. It taught me that while the world’s attention focuses on major events and institutions, the bigger story is that most progress in our lives comes from regular people having more of a voice.

While Zuckerberg might have forgotten the history, his own campus and several investigative reports [1], [2] from back in the day remember it in full detail. From creating a Facemash, a "hot or not" clone, to stealing the idea of Facebook from the three people behind Harvard Connection (for which Facebook eventually settled for $65 million), to now apparently having created it to give people a voice during the Iraq war, Zuckerberg seems ready to get into the presidential race.

Obviously, people are taking none of this. Here are some of the reactions and responses that today's history-makeover received:

Mark Zuckerberg just publicly retrofit the reason for founding Facebook from a tool that could rate the attractiveness of female college students to an attempt to right the wrongs of the leadup to the Iraq War. You can't make this up

Behold Mark Zuckerberg’s revised origin story for Facebook, as a way to give people voice during the Iraq war.
(And compare to the Harvard Crimson on Zuckerberg’s hot-or-not tool in 2003 https://t.co/dtm3vunKdE) pic.twitter.com/lmU5ofOJUV

Facebook history aside (or not), Zuckerberg also talked about China and specifically about TikTok, which appears to be a growing pain for the company as witnessed in the leaked internal meeting clips, as well. The complete big speech - or the word salad - on free expression is available here.