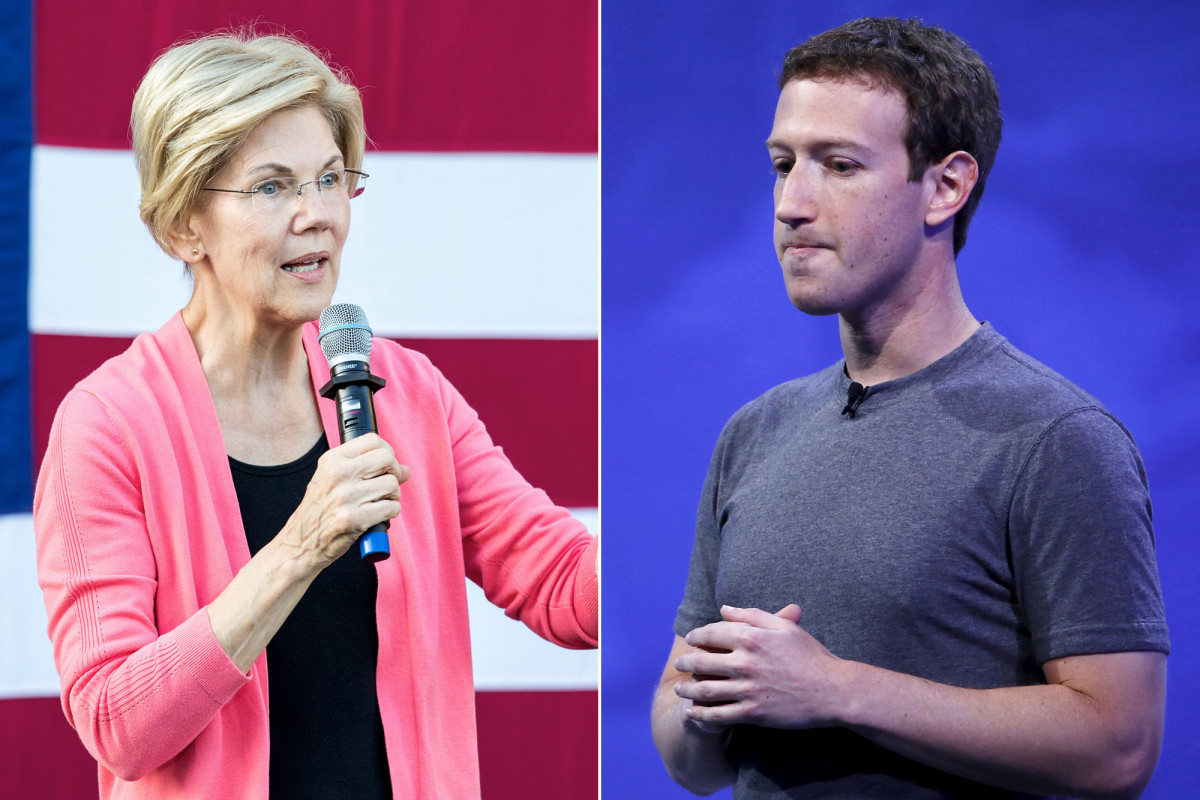 Leaked audio from an internal Q&A session with Mark Zuckerberg reveals the Facebook CEO is planning to "go to the mat and fight" Elizabeth Warren. Senator Warren along with several 2020 presidential candidates have proposed a plan to break up the largest tech companies, including Facebook, Amazon and Google. The plan was considered a "bold move" by our Finance team as it noted that "Democrats in the U.S. have traditionally received strong support from tech companies."

It now appears that Facebook is rattled by this plan. A leaked transcript and accompanying audio clips published by The Verge today of Zuckerberg's July meeting with his employees show Facebook chief's unease with Warren's presidency and her plans.

Here's an excerpt from these leaked transcripts of Zuckerberg responding to employee questions (emphasis is ours):

Question: With the recent FCC fine, investigation, and with the rise of politicians like Sen. Warren, I was wondering how personally worried you are about regulators coming in and breaking up Facebook?

Mark Zuckerberg: Well, I think you want to separate out a couple of things. I’m certainly more worried that someone is going to try to break up our company. Now, there’s a separate question about, at the end of the day, there is the rule of law - which, for all of the concern about the direction the country is going in, as someone running a company that operates in a lot of different countries, I have to say one of the things that I love and appreciate about our country the most is that we have a really solid rule of law, which is very different from a lot of other places around the world.

So there might be a political movement where people are angry at the tech companies or are worried about concentration or worried about different issues and worried that they’re not being handled well. That doesn’t mean that, even if there’s anger and that you have someone like Elizabeth Warren who thinks that the right answer is to break up the companies ... I mean, if she gets elected president, then I would bet that we will have a legal challenge, and I would bet that we will win the legal challenge. And does that still suck for us? Yeah. I mean, I don’t want to have a major lawsuit against our own government. I mean, that’s not the position that you want to be in when you’re, you know, I mean … it’s like, we care about our country and want to work with our government and do good things. But look, at the end of the day, if someone’s going to try to threaten something that existential, you go to the mat and you fight.

Following the release of these clips, Ms Warren tweeted in response that it would "suck" if the system isn't fixed that allows giant companies to engage in illegal anticompetitive practices.

What would really “suck” is if we don’t fix a corrupt system that lets giant companies like Facebook engage in illegal anticompetitive practices, stomp on consumer privacy rights, and repeatedly fumble their responsibility to protect our democracy. https://t.co/rI0v55KKAi

Zuckerberg added that the breaking up of the big tech isn't going to solve any issues as then "companies can’t coordinate and work together" saying that their size is why they can afford to fight election interference. Then he goes on to add that this is exactly "why Twitter can’t do as good of a job as we can."

In response to these leaked clips, Twitter's Brandon Borman tweeted that it isn't about money and that Mark clearly thinks differently.

It's not about money, it's about getting the work done and solving problems for the people we serve. Mark clearly thinks differently. Keeping people safe and secure is in our shared interest as an industry and we ALL have more to do. https://t.co/Wtg58QBSvk

Complete transcript can be read over at The Verge, which includes Zuckerberg speaking to its employees about Libra, his absolute control over Facebook, and employees' struggling to improve Facebook's image among peers and friends.