NVIDIA is soon going to unveil their GeForce GTX 950 graphics card for the sub-$200 market and we are already looking at couple of custom models that have leaked out, courtesy of Videocardz. The Maxwell based graphics card will launch on 20th August and will be aiming at budget gamers who want entry-level gaming setups that can run titles on 1080P panels with a decent amount of visual quality. 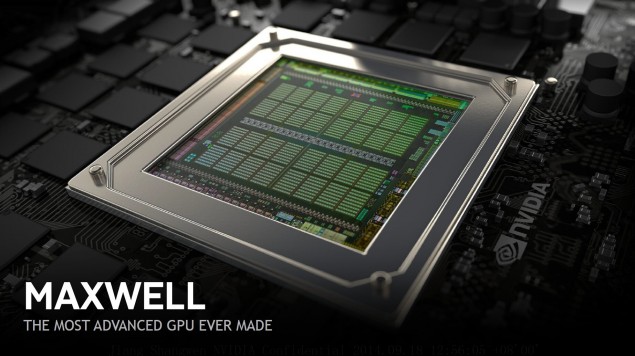 With AMD launching more and more GCN based graphics cards in the sub-$200 market, NVIDIA had to come up with a solution of their own. Currently, there are two cards which NVIDIA has to worry about which include the Pitcairn based Radeon R7 370 and Radeon R9 370X (Launching Soon). The Radeon R7 370 has a $149 US price while the Radeon R9 370X will have an expected price of $179 US.

With reference and custom GeForce GTX 950 models, NVIDIA might just be able to tackle the aging Pitcairn based cards at once in terms of performance, efficiency and features optimized for new gaming APIs. Speaking about the technical specifications, the NVIDIA GeForce GTX 950 is going to feature the GM206 GPU (GM206-250-A1) that features six SMM units that house 768 CUDA Cores, 48 texture mapping units and will retain the 32 ROPs. Based on the Maxwell GPU architecture that is a superb clocker, the GPU will presumably come with clocks of 1089 MHz base and up to 1266 MHz boost clock speeds. On the memory side, the card will feature 2 GB of GDDR5 VRAM that operates along a 128-bit bus, running at 6.6 GHz and a maximum bandwidth output of 106.7 GB/s. The card is going to feature a 90W TDP which will be 10W lower than AMD’s entry level card (R7 360) but overall, the GTX 950 will be the faster out of the two. Based on the same GM206, the GeForce GTX 950 will showcase a 30W drop in TDP numbers compared to the 120W, GeForce GTX 960. Display ports on the card will include Dual-Link DVI-D/DVI-I, HDMI 2.0 and a Display Port 1.2 connector on the reference variants.

Gigabyte is preparing two compact models of the GeForce GTX 950. Their top model feature their own WindForce 2X cooler with dual 90mm fans. The other model features a similar compact PCB but comes with just one 90mm fan. Both cards incorporate a single 6-Pin connector to power the graphics card and total display outputs include Dual-DVI, HDMI and a single Display Port.

Three models from ZOTAC were also leaked by Videocardz which show the reference model that has a single cooling fan and clocked at reference speeds. The ZOTAC GeForce GTX 950 OC that is a factory tuned version has speeds of 1102 MHz base and 1279 MHz boost while the memory is clocked at reference 6 GHz. Finally we have the GeForce GTX 950 AMP! which is the fastest model that ZOTAC will be offering with speeds of 1203 MHz base, 1403 MHz boost and memory overclocked to 7 GHz. These are insane GPU clocks and memory overclock will obviously deliver extra boost in performance. The card comes with dual fan AMP! cooling and is powered by a single 6-Pin connector. Surprisingly, the card this compact also will come with a backplate which sounds nice. 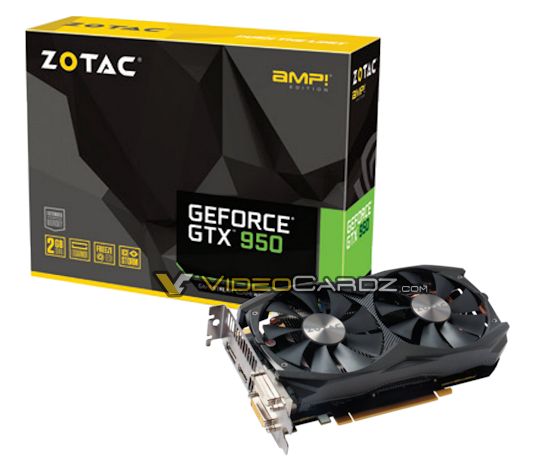