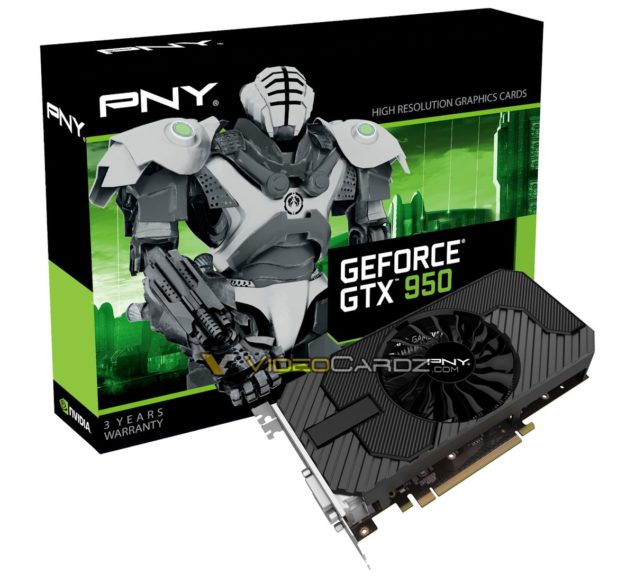 The NVIDIA GeForce GTX 950 is going to be an interesting graphics card considering that it has been some time since NVIDIA touched the sub-$200 market space. Their previous cards were the first generation Maxwell GPU based GeForce GTX 750 and GeForce GTX 750 Ti cards which launched at $119 and $149 US respectively. After the launch, NVIDIA introduced second generation Maxwell with better performance per core and greater over all efficiency. The most basic Maxwell graphics card that could be bought today is the GeForce GTX 960 which is based on the 2nd generation Maxwell core while the GeForce GTX 750 and 750 Ti received several price cuts down the road but were the only cards available under the sub-$150 range. AMD on the other hand already strengthened their market positioning in this range with the $109 US, Radeon R9 360 and the $149 US Radeon R9 370. While slower than the GeForce GTX 960 which competes perfectly with the $199 US Radeon R9 380, these cards do represent that NVIDIA did miss some market share even though they sold just around 15 million Maxwell GeForce 900 series cards ($199 US +).

With reference and custom GeForce GTX 950 models, NVIDIA will be able to tackle two cards at once. These will include the $149 Radeon R9 370 and the upcoming $179 US Radeon R9 370X. Speaking about the technical specifications, the NVIDIA GeForce GTX 950 is going to feature the GM206 GPU (GM206-250-A1) that features six SMM units that house 768 CUDA Cores, 48 texture mapping units and will retain the 32 ROPs. Based on the Maxwell GPU architecture that is a superb clocker, the GPU will come with clocks of 1150 to 1250 MHz base and 1350 up to 1450 MHz boost clock speeds. On the memory side, the card will feature 2 GB of GDDR5 VRAM that operates along a 128-bit bus, running at 6.6 to 6.75 GHz and a maximum bandwidth output of 107.68 GB/s. The card is going to feature a 90W TDP which will be 10W lower than AMD’s entry level card (R7 360) but overall, the GTX 950 will be the faster out of the two. Display ports on the card will include Dual-Link DVI-D/DVI-I, HDMI 2.0 and a Display Port 1.2 connector on the reference variants.

The one card revealed by Videocardz is a PNY made GeForce GTX 950 featuring a dual slot design that adopts a fancy cooling system. This card will be powered by a single 6-Pin connector and comes with a three year official warranty. Listings for the ASUS STRIX GTX 950 DirectCU II OC can be found across the net with very high prices which is because the card hasn't launched yet and the prices provided are just pre-launch. Expect more details for the card during this week as launch is anticipated in mid of August.