The outbreak of the coronavirus and the subsequent lockdown of global populations has resulted in economic shocks wiping off billions in market capitalization on the stock market. Yet at the same time, some stocks have fared far better than their counterparts have, simply due to the nature of the businesses underlying these lucky equities.

One such company is Amazon.com, Inc, (NASDAQ:AMZN) which has recovered 45% of its lost value on the open market since the coronavirus crash, beating major indexes in the process. But while Amazon's movement is still somewhat in line with indexes, the stock of Zoom Video Communications (NASDAQ:ZM) tells an entirely different story.

Taking a look at the past three months, February 19th is the date when stock markets in the United States started to plunge and kept on spiraling down for a month before regaining some composure in the final weeks of March. On that day, Zoom closed at a price of $103.93/share, and nearly a month later, on March 23rd, the stock price was up by 55.63 (54%!) to close at an all-time high of $159.56/share.

When analyzing investor sentiment about a stock, one important metric that everyone needs to keep in mind is the short interest. The short interest in a stock represents the number of shares that have been sold on the open market at a price below what the equity is currently trading for. Therefore, the metric demonstrates the proportion of investors who believe that an equity's price will drop in the future.

For Zoom, short interest in the stock peaked at the end of February, when roughly 12 million shares of the company were sold short on the open market. Since then, as the stock's price continued to demonstrate unprecedented upward momentum, investors became wary and started to close out said positions before the price moved further upwards. 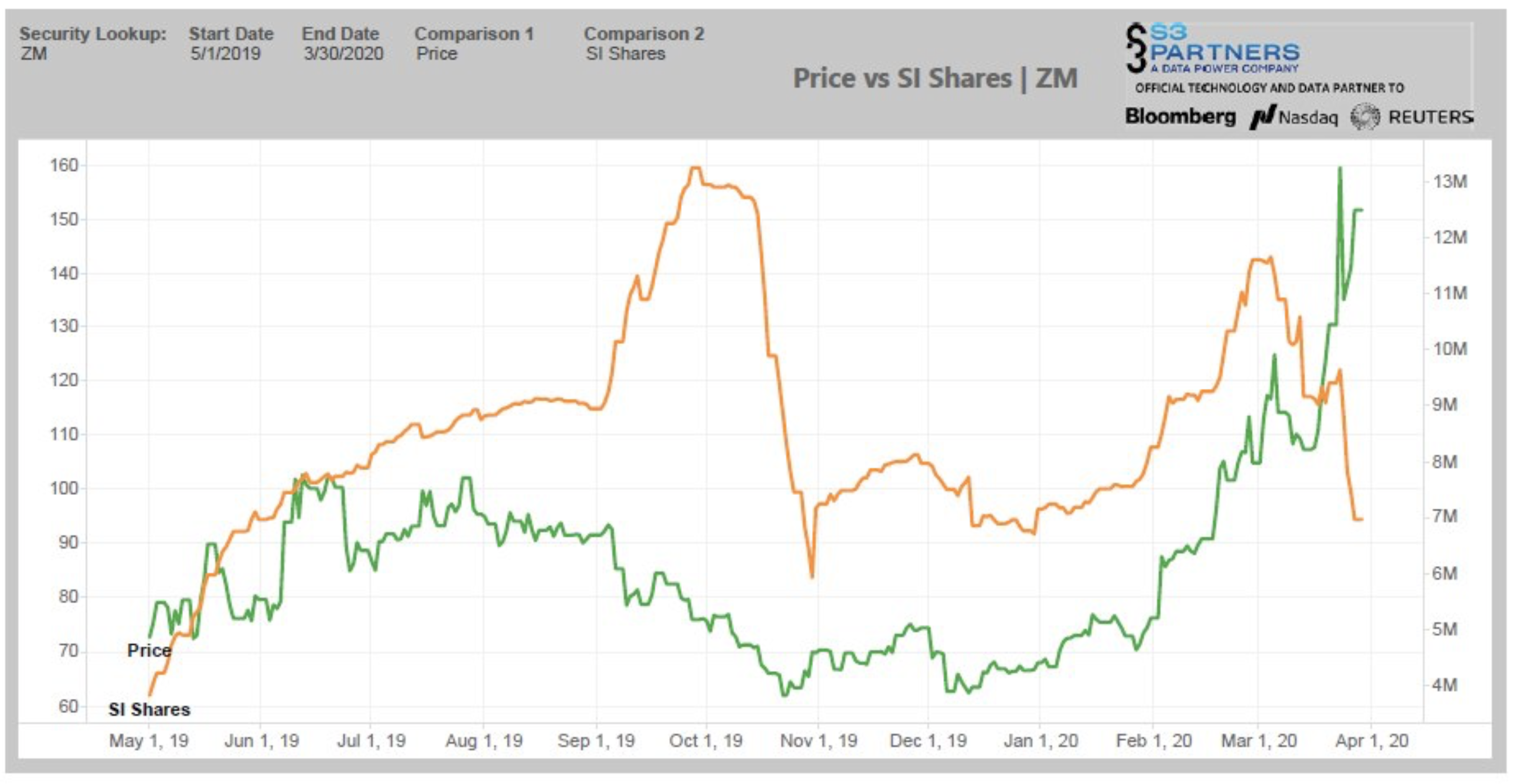 Looking at data from the NASDAQ first, short interest in Zoom started to go down after peaking at the end of February. The latest data from the exchange shows that by mid-March, this had dropped by 21% to stand in at roughly 9 million shorted shares outstanding, which would have taken only one day to close had all investors decided to do so.

Since then, as the NASDAQ does not refresh its data daily, we'll have to turn to the ever-reliable S3 Partners, LLC to analyze how well Zoom is doing inside short-sellers' minds. Based on their data, the company is doing quite well if you're bullish and not-so-well if you're bearish. S3 reports that as of April, short interest in Zoom has peaked to a new low of approximately 6.5 million shares or 2.3% of the company's total shares outstanding.

However, before you get too optimistic after taking a look at today's data, keep in mind that while short interest and short interest percentage are important metrics to analyze for a stock, using a single data point is never wise. Subsequently, when we look at option chain data for Zoom, looks like the bulk of investors believe that the stock's best run is ahead of it.

A large chunk of investors believes that Zoom should touch $140/share again as evidenced by the 3,278 put options for the stock that have been traded. On the bearish side, investors also believe that Zoom might drop below $120/share soon as evidenced by the 1,395 call options for that strike price. Comparing the volumes of these two stock prices, it's clear that the market believes Zoom still has some upward momentum left in it, despite some disconcerting reports regarding privacy that started to float around last week.