SEGA has officially announced that the HD collection for the PS2 classics, Yakuza 1 and 2, will release on 1st November, 2012 in Japan. The date was unveiled in the latest issue of Famitsu magazine.

The game will have improved high definition visuals and faster loading times by making the players install some data on their Playstation 3. Also, item management will be accessible through the in-game phone booth. And the food you eat once, will have a check mark on the food menu, making it easier to tally for the game completionists.

The image below shows the visual improvements for the HD remake: 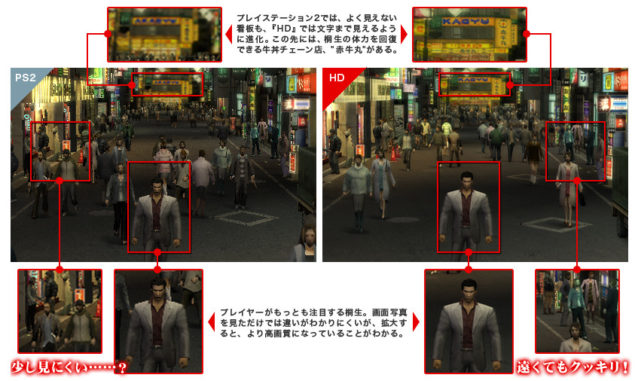 Visual improvements, comparison between the original and the remake.

It is being noted that the HD collection will be priced at a ¥5,290, equivalent to $67. It will be available exclusively on Sony's Playstation 3 console. No news regarding the North American and European release is available or whether the game will also be releasing on other consoles.

Also, Japanese people will get the game in the classic PS2's packing as a result of pre-ordering the game. Apart from the classic packing of the game, they will also receive a dummy packing made in the form of a PS3 cover. The could also be some pre-order extra content.

An official announcement is expected from Yakuza's website in a day or two.