Apple's iPhone 12 series is a big hit based on the number of devices it has shipped over the last year. In the second quarter of 2021, Apple ranked at third position as the world's largest smartphone vendor. The only two companies to leave Apple behind in the race are Samsung and Xiaomi. Xiaomi overtakes Apple and also shows tremendous growth during the timeframe. 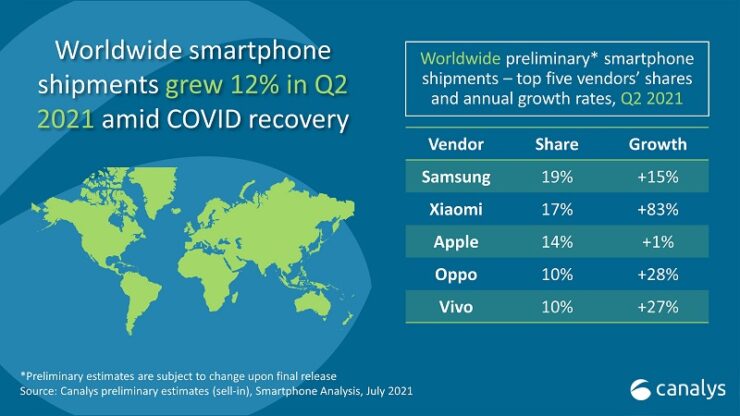 Xiaomi's enhanced growth is all because of its business overseas. The company shipped more than 300 percent in Latin America, 50 percent in Western Europe, and 150 percent in Africa. However, we have to note that Xiaomi's smartphones are somewhat more affordable and there are several devices to choose from. Compared to Apple, the average price of Xiaomi's smartphone price is 75 percent cheaper. If Xiaomi aims to reach Samsung's height, it has to increase sales of its flagship Mi 11 Ultra devices.

So a major priority for Xiaomi this year is to grow sales of its high-end devices, such as the Mi 11 Ultra. But it will be a tough battle, with Oppo and Vivo sharing the same objective, and both willing to spend big on above-the-line marketing to build their brands in a way that Xiaomi is not. All vendors are fighting hard to secure component supply amid global shortages, but Xiaomi already has its sights set on the next prize: displacing Samsung to become the world's largest vendor.

Moreover, since each quarter is different for each company, it is usually Apple and Samsung swapping the first and second positions. Due to the iPhone's strong performance, it rested at the number one spot in the prior durations. Since iPhone 13 is fast approaching. we will see the company sell further and score its position as the largest smartphone vendor once again.

What are your views on the subject? Let us know in the comments section below.