Chinese manufacturer Xiaomi made headlines this year with the launch of its Xiaomi Mi 4, a device that was as elegantly designed as it was light on the pocket. Well, if you're a big fan of the Chinese manufacturer which also got dubbed by some as the 'Apple' of China due to it imitating several aspects of Cupertino's presentations in it's own, we've got more Xiaomi devices for you. New leaked images have surfaced which claim to show the company's next flagship  - that might follow the dubbing as Xiaomi Mi5/4S. 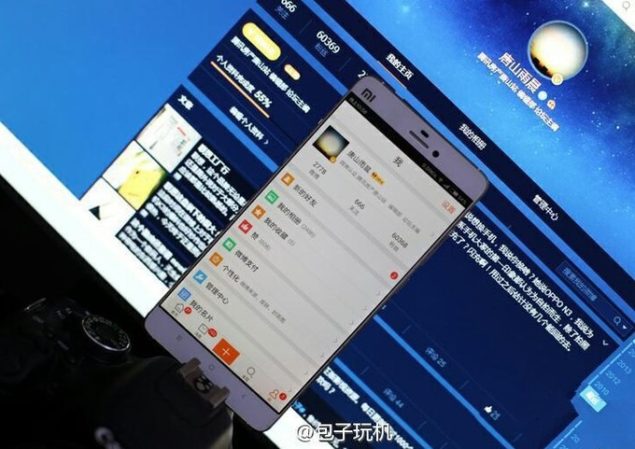 Looks like folks over at Xiaomi have gotten a lot of things right when it comes to designing their next flagship. As you can see, the image above shows a device with remarkable thin bezels and an elegant design that follows in the footsteps of the popular Xiaomi Mi 4. Screen size also seems to be increased for the next Xiaomi flagship, as the device above looks to sport a screen nearing 6 inches. The next Xiaomi phablet anyone?

Thats not to forget that Xiaomi is also rumored to be planning on top specifications for its next device. The next flagship is expected to come with Qualcomm's top of the line Snapdragon 810 SoC on board which will be coupled with 3 GB of RAM on the device. But we're going to have to wait for some time since Qualcomm has been facing repeated problems with its upcoming SoC lineup.

Lets see how things develop and whether the company has any plans for us this January at the CES due to be held in Vegas. Whatever the case may be, the next Xiaomi flagship does look fantastic indeed and thin bezels is a feature that should come on more devices out there. Let us know in the comments section about what you think.