No one bothers to read manuals anymore, and that's a pity, because for all we know the secrets of the universe could be hidden inside those things. We didn't find any ground breaking physics discoveries, but you know what our reviewer Keith May did find? XFX's custom built double dissipation RX 480 GPU right there in those fancy illustrations. It goes without saying that this is probably an accidental slip - no doubt XFX assumed no one would look too closely into this (ha!).

The RX 480 is the next generation AMD Radeon graphics card rocking the 14nm FinFET based Polaris 10 chip. Housing a total of 2304 stream processors based on the GCN 4.0 architecture this performance efficiency and value monster will retail for the base price of $199 for the 4GB model. Featuring a blower style cooling solution strongly reminiscent of the Fermi series from Nvidia, the RX 480 will have a TDP of only 150W and a single six-pin connector. That is to say, until the custom variants land.

So far, if you were to head over to XFX's website, you will find that only the reference variants of the RX 480 are present. That is because the custom cards haven't been released yet (although many have so far been teased). The XFX RX 480 Double Dissipation looks exactly like its older generation counter parts and at first we thought this might just be a picture of an older RX 380 DD graphics card but there are quite a few things that disregard that notion. As soon we noticed this, we dug out our old box of RX 380 Double Dissipation and went through its manual as well. Lo and behold, this particular section was not there.

A scan of a section in the instruction manual of the XFX RX 480.

Secondly, if you take a close look at the visible capacitor placement shown in the diagram and compare that to the existing RX 380 and R9 390 Double Dissipation series you will notice that they are quite obviously different. The placement of the caps is similar to the custom Double Dissipation variant of the R9 390, but the make and model of that particular GPU was noticeably different: not only did it have a longer PCB but it used fans that were widely spaced unlike this particular variant. The fan design and PCB are similar to the R9 380 but the cap placement is different. This is why we can safely assume that the variant shown here is not any older XFX DD GPU and combined with the fact that this is a manual for an XFX RX 480 card makes it simple enough as far as deduction goes. 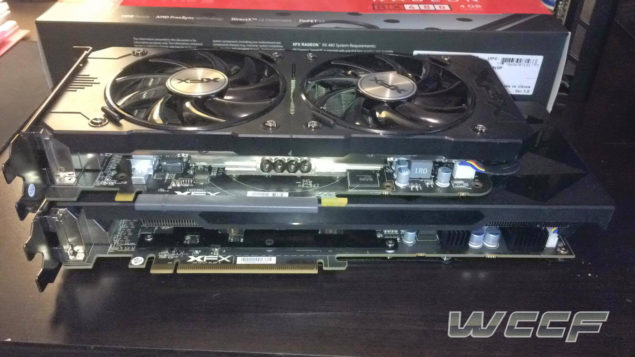 Apart from all that the custom RX 480 looks exactly like the counterparts XFX has already designed. The card appears to have: 1x HDMI, 1x DVI-I, 1x DVI-D and 1x Display Port which is the standard configuration for double dissipation cards from XFX. Custom models are expected to land sometime in mid-July and will offer not only offer better overclockability thanks to custom cooling solutions but will also have beefier power supply system (even though the current 6+1 Phase solution onboard the RX 480 is pretty damn good).

Be sure to take a look at Keith's full review of the XFX RX 480 which includes the surprise discovery: