Back in January, after a bit of a false alarm during the AMD CES presser, the Xbox Series X’s back ports were revealed. It was mostly stuff you’d expect –  the usual HDMI out, USB, ethernet, and optical audio ports, but there was also a mystery slot that nobody could quite identify. Some speculated it might be for debugging purposes, but it seems that’s not the case.

According to solid Xbox insider Brad Sams at Thurrott.com, the mystery slot is, in fact, for memory expansion. That makes sense, as both the Xbox Series X and PS5 will take advantage of speedy solid-state drives, with a side-effect being you’ll no longer be able to plug any old cheap portable hard drive in for extra storage. Both of the new consoles are going to have to come up with novel storage solutions. 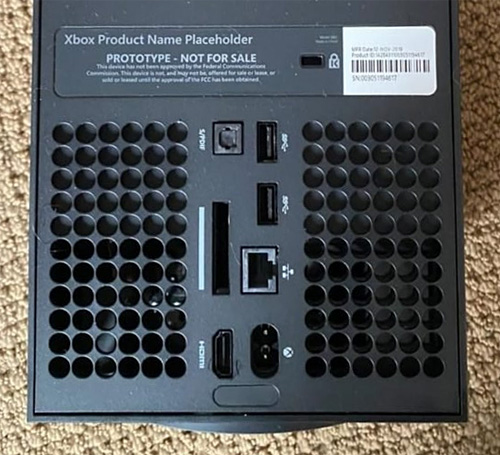 So, is there any way to surmise what type of storage expansion solution Xbox Series X will use just by examining our newly-identified slot? Well, Sams does some speculating in his article – the storage expansion slot looks to be around 31mm x 4mm, which is just about the right size for a CFExpress Type B memory card. The Xbox One X’s Phison PS5019-E19T memory controller (the chip that allows high-end data transfer between an SSD and CPU) is also said to be compatible with CFExpress Type B cards.

CFExpress cards are the next generation of memory card technology, providing read and write speeds similar to a solid-state drive. That said, they’re also very expensive at the moment -- $200 for a mere 128 GB card and a whopping $600 for 512 GB. So, as of right now, it seems an unlikely storage solution, but maybe Microsoft is preparing for the future? Memory card tech moves fast and prices drop quickly, so in a year or two, a CFExpress card could be a real solution.

Of course, there are other options. Microsoft could be planning to use standard NVMe SSDs in some sort of custom thumb drive or cartridge enclosure. That would help with the price issue, as a 512 GB NVMe M.2 SSD only costs around $150. Still expensive, but not as bad as a CFExpress card.

The final, and least appealing option, is that Microsoft is going back to the PS2/Gamecube era and planning to sell some sort of proprietary memory expansion card, but that seems extremely unlikely in 2020. At least I certainly hope so.

What are your thoughts on this subject? What should Microsoft go with for Xbox Series X memory expansion? Is there actually an ideal option?