Now that the latest consoles have been launched and are being fully supported by their respective manufacturers and third-party video game development studios, what gamers are eagerly waiting for next are new video game titles as well as slim versions of the PlayStation 4 and Xbox One consoles. Of course, we still have years to go, or at least one year, before the two big platform holders come up with the Slim versions of the latest consoles, but until that happens, we can just feed ourselves with magnificent fan-made concept arts, such as the one below that shows how the Xbox One slim console might look.

The seventh generation standard PlayStation 3 console was replaced by its slim variant almost after 3 years of its launch, similarly Microsoft made some changes to its Xbox 360 console by launching its slim version in 2010, roughly 4 years after the launch of the original console. In November 2013, both Sony and Microsoft successfully launched their eighth generation respective PlayStation 4 and Xbox One consoles. Keeping in mind the arrival of slim variants of the seventh generation consoles, there is still a long period to cross before we could get our hands on the slim variants of the latest consoles. However, fan-made concept arts are not illicit.

Among other reasons behind the tainted criticism and shallow sales of the Xbox One console is its chunky design and not very pleasing looks. Compared to its biggest rival, the console is much bigger in dimensions, has more weight, and is pretty chubby with much shine. Hopes are that Microsoft will eliminate all the possibilities of crummy designs when going for the Xbox One slim console, because that is exactly what gamers want and what designers are trying to tell by coming up with some gorgeous Xbox One slim concept arts such as the one shared below.

Designer Micheal Retovona seems to be another Xbox fan who eagerly wants to see a jaw-dropping Xbox One slim console become a reality, perhaps that is why he came up with a mock-up of what the much awaited version may look like. Check out the fan-made concept art of sleek, rounded, less shiny and much thinner Xbox One slim console right below (and compare it with the original Xbox One console above). 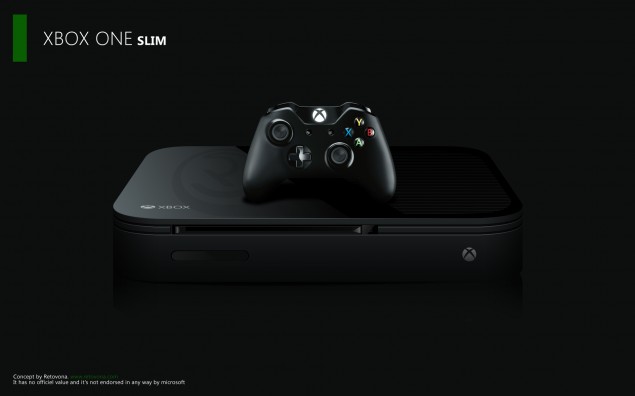 This fan-made Xbox One slim concept looks pretty pleasing, with less shine and smooth, trimmed corners, the designer has shaved off at least half of the total Xbox One volume, and the whole system looks quite perfectly designed. Microsoft might launch the Xbox One slim sooner than later, as doing so will surely help the American-platform holder boost the sales as well as make the console more attractive.

What do you have to say about the inevitable Xbox One slim console? Share your thoughts in the comments section below.