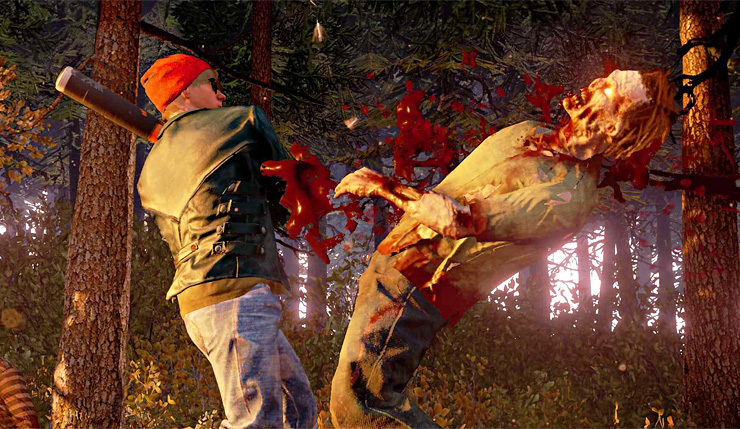 Microsoft has revealed the games they’ll be adding to Xbox Game Pass in May. They include the latest big Microsoft exclusive State of Decay 2, the new-release arcade shooter Laser League, Pro Evolution Soccer 2018, Overcooked, The Escapists, Sonic & Knuckles, and more! Check out official Microsoft descriptions of all the May Xbox Game Pass titles, below: 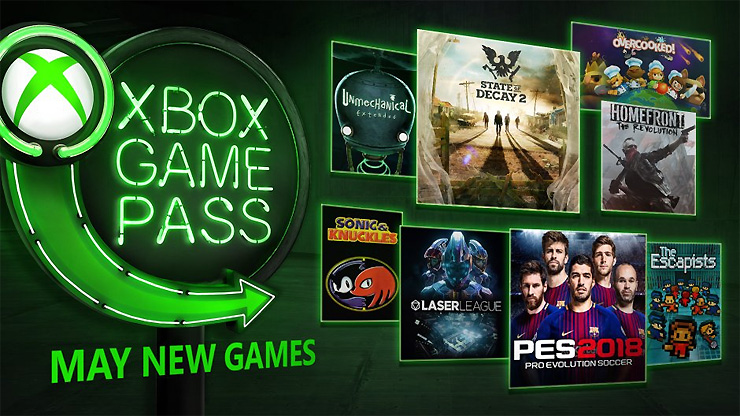 State of Decay 2 is the ultimate zombie survival fantasy that asks – how will you survive? A true sequel to the successful first game, take on the zombie apocalypse as you build a community with unique survivor characters who have their own backstories and motivations and develop a base that makes each experience completely different. State of Decay 2 features one of the most requested features from the community: cross-platform co-op multiplayer, where you and up to three of your friends can survive together on Xbox One or PC. State of Decay 2 is available for Xbox Game Pass members May 22.

On May 10, Laser League, a light-speed, arcade multiplayer shooter like no other, will be making its console debut on Xbox One. Roll7, known for the award-winning OlliOlli series and Not A Hero, bring their trademark addictive gameplay to an original vision of near-future competition. Jump into exhilarating 4v4 local matches or go online for 2v2 and 3v3 battles, face off in packed and vibrant international stadiums with intensely challenging laser maps to master, and party up with friends to find the perfect strategic blend of the six distinct player classes. Climb the leaderboards and make a name for yourself, gaining mastery ranks and XP. Unlock new player kits, emojis, and laser patterns to customize your characters to leave your mark on the pitch and in Laser League history!

It’s time to take to the pitch and feel the match-day electricity as Pro Evolution Soccer 2018 comes to Xbox Game Pass from May 1 through August 31. Experience the award-winning series and play as iconic teams like F.C. Barcelona and Borussia Dortmund, put on a gameplay masterclass with the striking prowess of Luis Suárez, or make Emirates stadium rumble with Arsenal’s Aubameyang. The authenticity of the beautiful game is presented with true-to-life visuals and animations of players like Philippe Coutinho, Marco Reus, Lionel Messi, and Neymar Jr. Team up with friends in online 3v3 co-op matches to become the next great e-sports team. Pro Evolution Soccer 2018 is where legends are made.

If you can’t stand the heat, it’s because your kitchen is on fire! Overcooked, the award-winning chaotic couch co-op cooking game for one to four players will be available on Xbox Game Pass starting May 1. Chop, dice, and fry your way to victory in a race to serve your hungry customers before they storm out, taking their precious tips with them! Choose from a variety of quirky chefs and take part in an epic journey, tackling an increasingly challenging gauntlet of kitchens that will push your skills of co-operation and co-ordination to the limits. Have you ever wanted to boil soup while moving between two speeding trucks or bake pizza in a haunted house? Then Overcooked is the game for you!

Award-winning prison break simulation The Escapists is coming to Xbox Game Pass on May 1. While the aim of the game is simply to escape, the beauty is in the execution. You’re free to explore the prison, grabbing every chance to plan your escape between the mandatory rollcalls and chores. Do favors for your inmates, build up your strength in the gym, or read books to increase your skills. Liberate items from your inmates to use for crafting weapons and tools (soap can do so much more than keep you clean). Whether you execute a stealthy breakout or go out all guns blazing, the goal is the same: escape!

Rise up and lead the resistance in Homefront: The Revolution, an epic open-world shooter set in a dystopian near future, where the United States has been occupied by the overwhelming military might of the Korean People’s Army (KPA) — available for Xbox Game Pass members on May 1. As Ethan Brady, you must master the art of guerrilla warfare — ambush, sabotage, infiltration, and deception — and fight a running battle through the war-ravaged suburbs of Philadelphia. Homefront: The Revolution boasts a vast single-player campaign and the Resistance Mode, a fully featured co-op experience that lets you and your friends form a Resistance Cell and take the fight to the KPA in thrilling PvE combat.

Unmechanical: Extended is a puzzle adventure game that combines tricky puzzle solving, exploration, and an engrossing atmosphere, and is available for Xbox Game Pass members on May 1. Players can look forward to losing themselves in a world of flesh, rock, and steel, solving a whole host of puzzling challenges, helping our little robot who is trapped in an underground complex find his way to freedom.

Join Sonic and Knuckles from May 1, as they put aside their differences and combine forces to thwart the schemes of the conniving Dr. Eggman. Their goal is to acquire the priceless Master Emerald and save Angel Island—a goal they cannot reach on their own. You can play as Sonic with amazing new powers or play as Knuckles with your wall-climbing skills or bare-fisted fighting style to defeat Dr. Eggman. You have eight zones to explore and two adventures to conquer. And to enhance the excitement you can combine with Sonic 3 to blow out the experience -- playing as Sonic, Knuckles, and even Tails to unlock the best secrets. Also, you can combine with Sonic 2 and all of Knuckles signature moves are now yours.  Sometimes your enemy turns out to be your best friend!

Xbox Game Pass grants players access to more than 100 Xbox One and Xbox 360 games (177 as of May) for $10 a month — you can check out a full list of available games here. In January it was announced all Microsoft Game Studios Exclusives, including major games like Sea of Thieves and Crackdown 3, will be available through Game Pass from day one. Microsoft is offering fans their first month of Game Pass for only $1 for a limited time, so you don’t have much to lose!

What do you think of the May Game Pass lineup? I’d definitely say it’s a solid update – we get two promising new-release games in State of Decay 2 and Laser League, and some good to great older titles in PES 2018, The Escapists, Overcooked, and Sonic & Knuckles. Which will you play first?