Microsoft has revealed the games they’ll be adding to Xbox Game Pass in the first half of March, and there’s some big games on the way! Microsoft is serving up Just Cause 4, which released only months ago, Fallout 4, F1 2018, and more! Fallout 4 had previously been on Game Pass, but was removed. Plenty to keep you busy while you wait impatiently for spring. 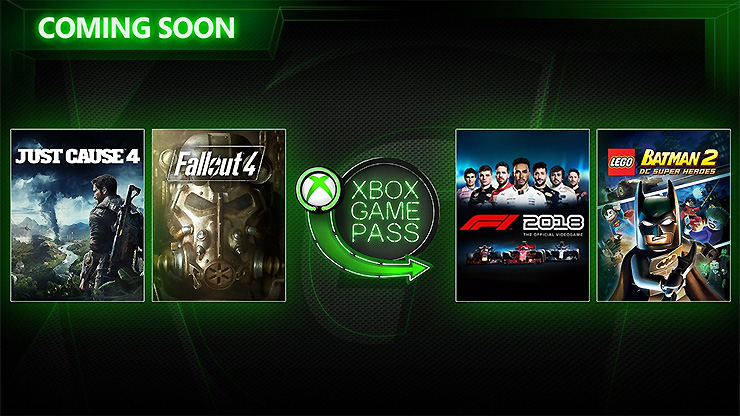 You can check out official Microsoft descriptions for the new Game Pass titles below:

Play as the rugged rogue agent Rico Rodriguez and venture to the Island of Solis where you can unleash chaos in a number of explosive & creative ways. With Rico’s newly customizable grappling hook, you’ll be able to stride, glide and ride through exotic landscapes besieged by extreme weather, pushing you and enemy Black Hand militia to their limits as you lead an army of chaos. Lightning-ridden rainforests, roaring deserts, howling snowstorms…and did we mention tornados!? Take in the sights and stay a while.

Calling all crime fighters! Batman, Robin, Wonder Woman, Superman, and more playable DC Comics characters than you can shake a shark repellent covered stick at, are back to save Gotham City. Play as different members of the Justice League in this open world single or multiplayer game, while stopping Lex Luthor, Joker, and more notorious villains in their tracks.

F1 2018 challenges you to make headlines as you become immersed in the world of F1 more than ever before. You will have to build your reputation both on and off the track, with time-pressured media interviews that influence your career in the sport. Do you exhibit sportsmanship or showmanship? Will you develop your team to the top or send your agent to target a rival team and driver? F1 2018 puts you in control of your destiny. Featuring all of the official teams, the drivers and all 21 circuits of the thrilling 2018 season.

Returning to your Xbox Game Pass library in a shiny set of Power Armor, Fallout 4 drops you back into the Commonwealth as you set out to search for your missing son. Explore the wasteland, fight vicious Deathclaws and gain new abilities to help shape the fate of a post-apocalyptic Boston. The more you explore, the more you discover, so be sure to scour every inch of the game’s huge map. After all, there will always be another settlement that needs your help.

What Xbox Game Pass titles will you be tackling over the coming weeks? Just Cause 4 has its flaws, but its certainly worth a shot, and Fallout 4 should mostly get that bad Fallout 76 aftertaste out of your mouth.