Open-world games are changing. Ubisoft have been gradually transforming their open-world titles into RPGs, while Rockstar have fallen in love with online multiplayer, and, uh, horse testicle simulation. The Just Cause series is one of the last remaining proponents of an earlier open world philosophy that emphasizes do-it-yourself mayhem over story, realism, or live-service-pushing interconnectedness. With Just Cause 4, developer Avalanche Studios sticks stubbornly to their guns, delivering more gleefully-mindless destruction than ever.

Of course, sometimes change can be a good thing. There’s something to be said for taking an old-school approach, but does Just Cause 4 still hold its own in a world dominated by the likes of Red Dead Redemption 2 and Assassin’s Creed Odyssey? Is there still an audience for straightforward sandbox games, or is Just Cause more of a lost cause at this point?

Just Cause 4 once again casts players as Mexican superman and rebel-for-hire, Rico Rodriguez. This time around, you’re helping to free the fictional South American nation of Solís from dictator Oscar Espinosa, who’s being propped up by Rico’s old enemies, the Black Hand. In classic evil organization fashion, Espinosa and the Black Hand have developed the power to control the weather and sequestered themselves in a mountaintop lair surrounded by an impassible snowstorm. It’s on you to figure out how to counter the weaponized weather, infiltrate the mountain base, and make Espinosa go bye-bye. Just Cause 4’s story is your classic MacGuffin chase – a list of things to collect and missions to accomplish with very little in the way of real plot or character motivation. We do get a couple crumbs about Rico’s past, but the character’s general blandness makes it hard to care. 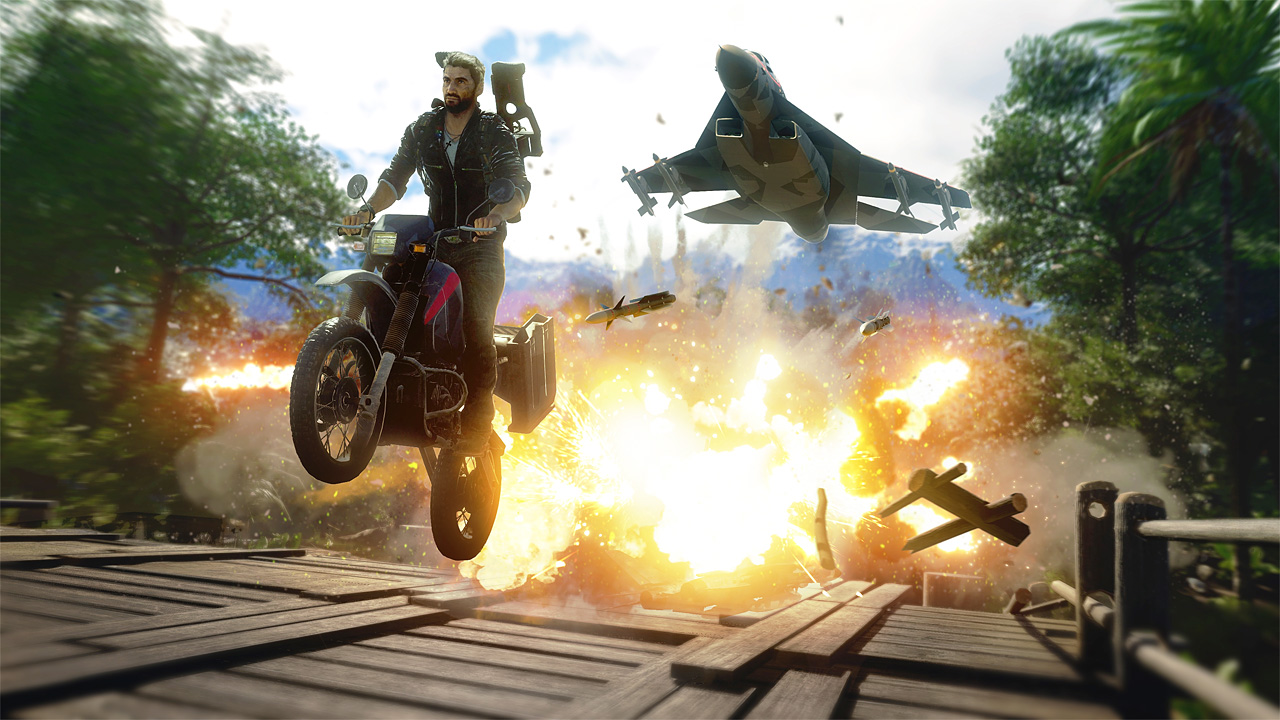 As in Just Cause 3, Rico’s main three tools are his high-tech arm-mounted grappling hook, parachute, and wingsuit. The grappling hook can quickly zip Rico toward any object and be used in conjunction with the parachute, while the wingsuit lets you soar long distances like a flying squirrel. With skill and a bit of luck, you can glide pretty much anywhere without touching the ground. Just Cause 4’s grappling hook has received a bit of an upgrade – in addition to tethering objects together and launching them with rocket boosters, you can now send them skyward with air-lift balloons. You can also unlock a greater variety of grappling hook modifications, which allow for new levels of destructive creativity. Just Cause 4’s mechanics certainly make for fun trailers and YouTube Let’s Plays, but not everybody’s into creating explosive Rube Goldberg machines – thankfully, you’re free to skip all the faffing about and just chuck a few grenades at whatever you want to blow up.

When all of Rico’s abilities work in harmony, Just Cause 4 can be a thrilling experience, but all too often they don’t. Compared to a game like Spider-Man, traversal can be a bit clunky, with the grappling hook regularly leaving you dangling from the bottom side of ledges when you’d prefer to climb up on them. Also, when not grappling or gliding, Rico is, frankly, a bit of an oaf, trundling along at a leisurely pace and getting stuck on various objects in the environment. For every truly empowering moment, there’s one that will have you cursing at the screen. 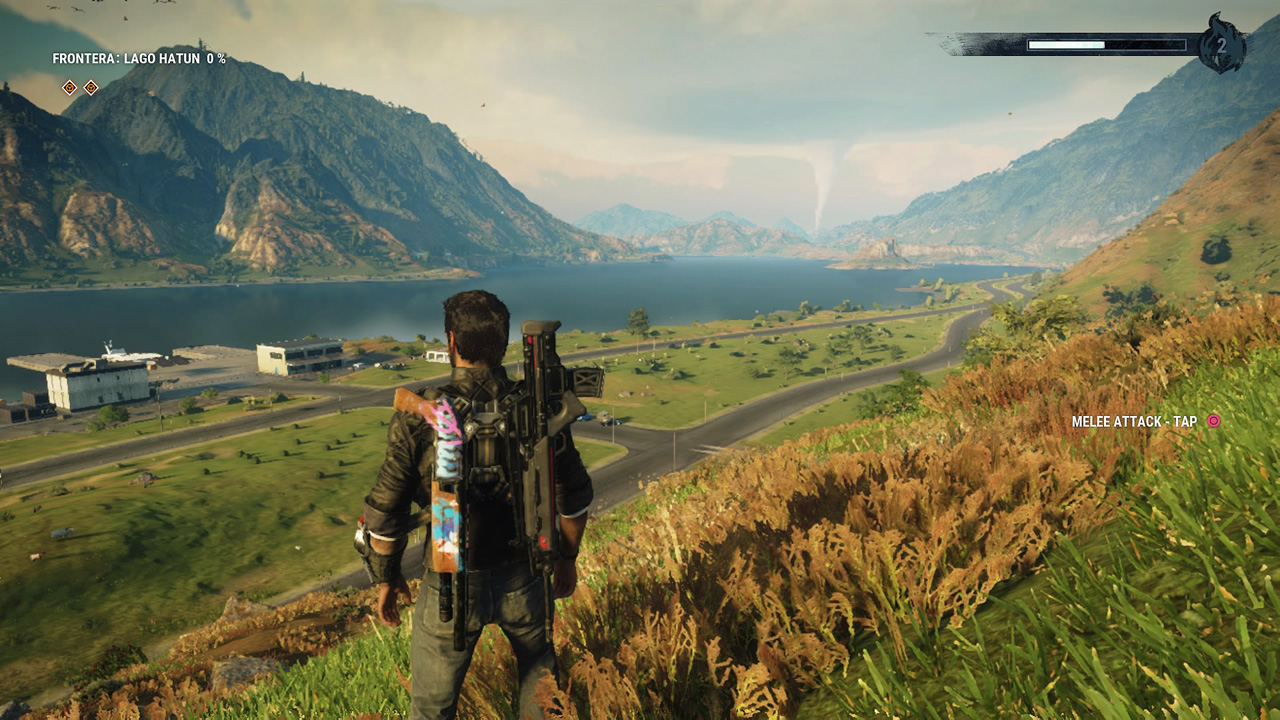 In terms of scope and technical ambition, Solís is Avalanche Studios’ most impressive open world yet. The map is around the same size as Just Cause 3’s Medici Island, but it’s more varied and less taken up by water. Just Cause 4 lets players explore jungles, deserts, icy mountain peaks, and a sunny coastline which recycles some of Just Cause 3’s Mediterranean assets. Solís takes a solid 10 minutes to cross with a helicopter, and on foot, it's nearly endless. This is a world you can truly get lost in. It’s also fairly nice-looking – there is some object and shadow pop in when flying over the map on PS4, but it doesn’t detract from the overall effect too much. Performance during gameplay is solid, but cutscenes suffer from some pretty egregious slowdown and odd visual blemishes. Unfortunately, the technical issues don’t end there – I had the game crash on me three or four times during my playthrough. 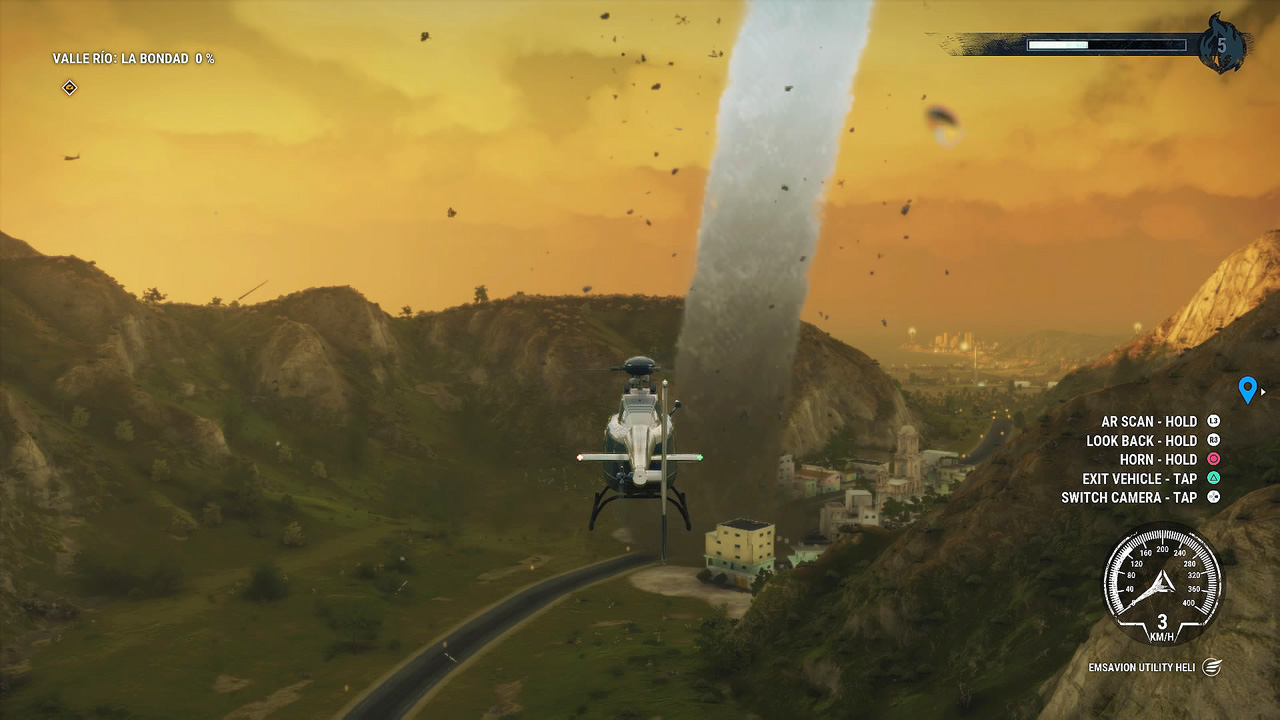 As impressive as Just Cause 4’s world is in some respects, don’t expect much from the much-ballyhooed extreme weather effects. Granted, the game’s tornadoes are pretty cool, but they’re a rare sight in the wild and can be easily avoided. Also, with a few exceptions, the weather effects (tornadoes, lightning storms, sandstorms, and blizzards) don’t really come into play in missions. Overall, there’s no sense that these storms are something to be feared or a serious issue for Solís.

Even if Just Cause 4’s storms felt like a real threat, I wouldn’t particularly care about the destruction they were causing. Solís may be imposing, but in the wake of Red Dead Redemption 2, the limitations of Avalanche’s “just mess around” ethos are clear. Just Cause 4’s NPCs are just nuisances to be messed with, which renders a lot of the world’s little touches meaningless. You’ll come across villages populated by people chatting, hanging their laundry, or engaging in impromptu dance parties, and you’ll just run by it all looking for something to blow up. If you actually want to progress the game, Just Cause 4 fairly quickly becomes a rote “find explosive stuff” hunt. The world isn’t as destructible as you might think – not all buildings or objects can be demolished, and you have to incinerate specific “Chaos Objects” in order to build up your army and take over the map. Leveling up your army is a bit of a grind, to the point it sometimes feels like there are not enough opportunities to blow stuff up. 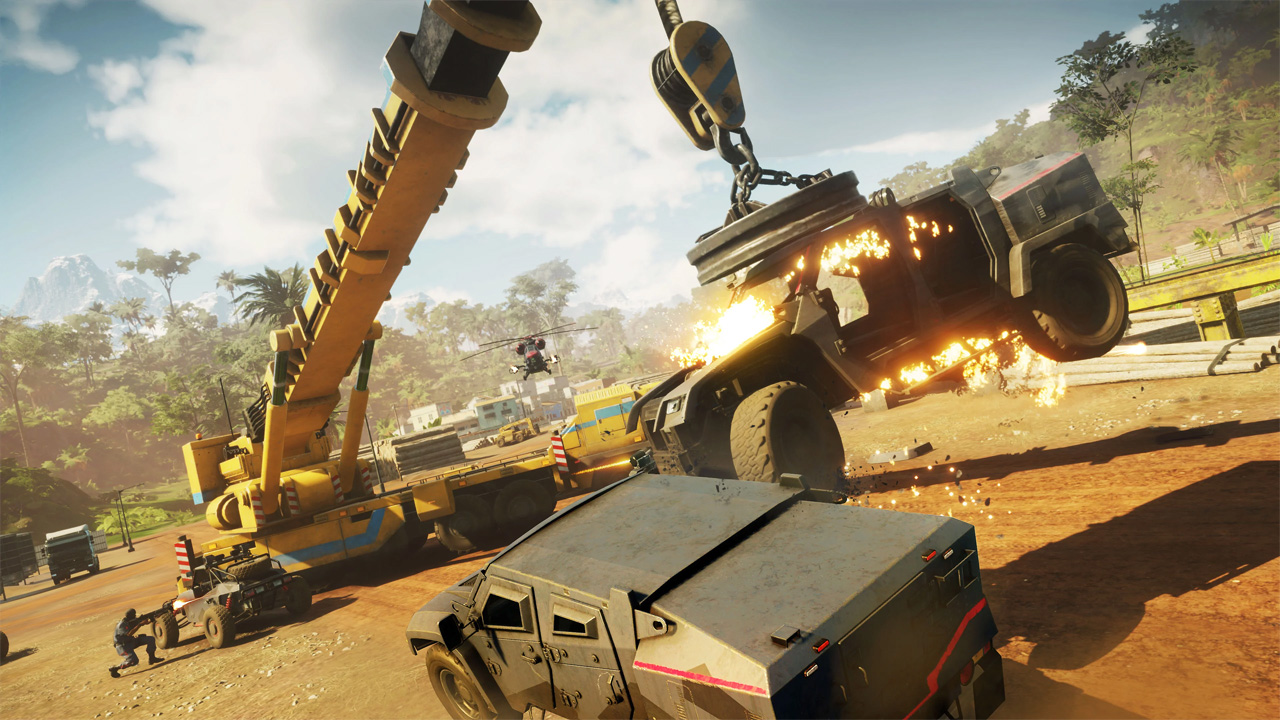 Missions put a further damper on your Solís vacation, with Avalanche leaving no rock unturned when it comes to annoying level design tropes. Escort missions, timed missions, “hack the computer terminals” missions, Just Cause 4 has ‘em all! There are a few bright spots -- a series of Tomb-Raider-esque puzzle-focused missions come to mind – but even the good missions don’t really play to Just Cause 4’s strengths. Why don’t more of them focus on destruction? Why am I running around this enemy base flipping switches when I should be flattening it?

Just Cause 4’s story can be blitzed through in 15 to 20 hours if you’re focused. 100 percent completion will take a lot longer, although I’m not sure how many players will be motivated to bother. Ultimately, I found Just Cause 4 was most satisfying when I hopped in a chopper or found a good gliding spot and just took a minute to appreciate the world Avalanche has built. These quiet moments were a nice vacation from the rest of the game, although the fact that I needed that escape maybe isn’t a rousing endorsement.

This review was based on a PS4 copy of Just Cause 4 provided by publisher Square Enix.

Just Cause 4 delivers a truly astounding open world that lacks much to do beyond “blow up more gas tanks.” A shallow story, an absence of interesting NPCs, and frustrating mission design make for an uninvolving game that sometimes feels like a job to play. There is fun to be had in Just Cause 4, but only if you stage a revolution against what the game wants you to do.