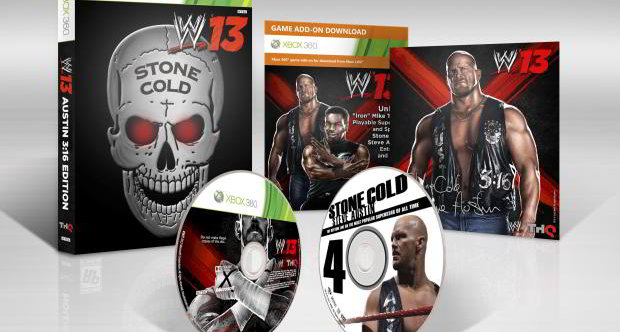 WWE '13 is set to release this October on the Xbox 360, Playstation 3 and the Wii. THQ are promoting the game with the tag line 'Live The Revolution', primarily targeting the later years of the 90s, which completely revolutionized the phenomenon known as the WWE, called the Attitude era. Attitude era was all about taking an adult oriented approach towards pro-wrestling. And who other that the 'Texas Rattlesnake", Stone Cold Steve Austin to represent that era. Steve Austin is a living legend who defined what we call the Attitude era.

The regular edition of the game is priced at $59.99. By spending 20 dollars more, you can pre-order a copy of this game and open a can of whoop *** right in your living room. The special Steve Austin edition includes an exclusive foil packaging featuring an embossed Stone Cold Steve Austin skull, an art card autographed personally by Stone Cold, exclusive in-game Steve Austin attire from the early 2000s, in-game ATV entrance for the Bionic Redneck, a download voucher for Mike Tyson as a playable character and a documentary titled, "Stone Cold Steve Austin: The Bottom Line on the Most Popular Superstar." Watch the trailer about this exclusive Austin 3:16 Edition by clicking here.