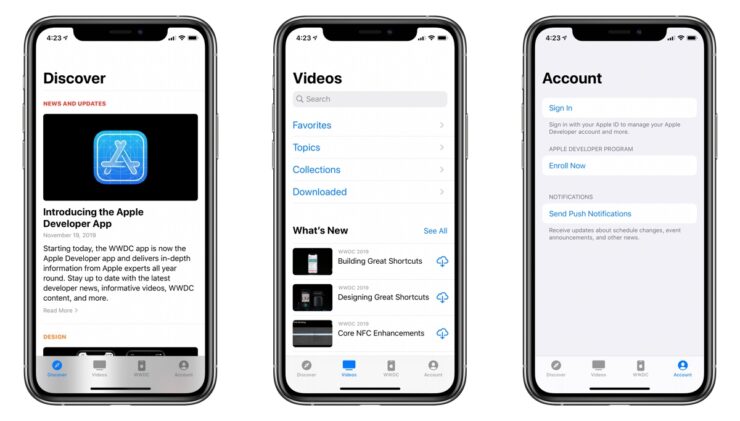 Apple has released an update for its WWDC app for iOS, Apple Watch, and Apple TV, and rebranded it to Apple Developer app. The app used to focus primarily on WWDC content and schedule but with the rebrand, Apple will be updating it throughout the year. The app has also gained other features like dark mode support, improved search user interface, a new 'Discover' tab, and Apple Developer Program enrollment support.

The new Discover tab in the app is a newsfeed of sorts, which shows the latest news, updates, and videos from Apple. The videos can be downloaded offline to be watched later. Unfortunately, the app does not take advantage of Safari Web View, and tapping on any link in the updates moves you to Safari browser.

The app also lets you sign in to your Apple Developer account and see their enrollment status. Developers in the United  States can enroll for a new account or renew an existing one, right from the app. It is hard to believe that it took Apple so long to bring this subscription feature for its own developer program to an app. The subscription fees will be deducted from the user's App Store/iTunes account, similar to other subscriptions like Netflix. Apple will be bringing the enrollment feature to more countries over time.

Other updates include a much-awaited dark mode that works with iOS 13 and iPadOS 13, updated search user interface and more. Here are the complete release notes from Apple:

Thank you for your feedback. New features include:

The app still has a dedicated section for WWDC so it will still be the primary app to follow the event's schedule and updates.

Strangely, Apple has not used Project Catalyst to bring this app to macOS Catalina too. Hopefully, it is on their to-do list. The video download feature would be really helpful on Mac, since the content is well organized in the app.

If you develop for Apple's platforms, the app is a must-have for your iPhone, iPad, Apple Watch and Apple TV.