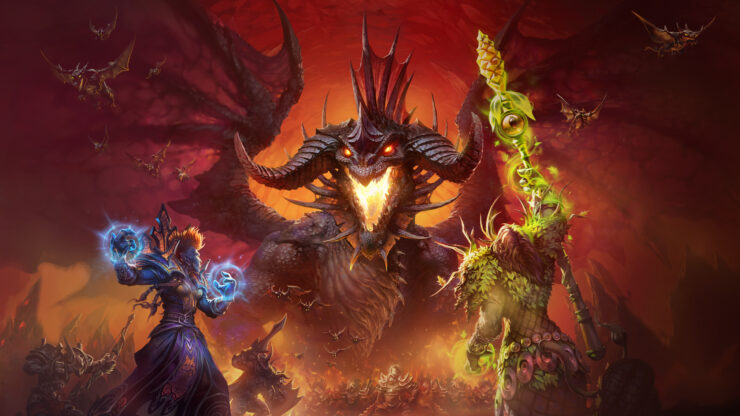 Today is a day for letters in Activision Blizzard, as the ramifications over the Lawsuit are hitting. Sadly, some of those letters aren't resignation from employees who have been the culprits of sexual discrimination, sexual harassment, and sexual assault against the women who work at the company, but there are still letters. Following on from Bobby Kotick's letter after the allegations reached him, the World of Warcraft team within Blizzard has also tweeted a letter to the fans.

It's not a huge surprise a tweet specifically from the World of Warcraft team has been sent out, particularly with a large number of people either cancelling subscriptions or those who are locked into a subscription, logging in and protesting by spreading the word of the horrific conditions found within Activision Blizzard. As for what the tweet says, you can read the message below. 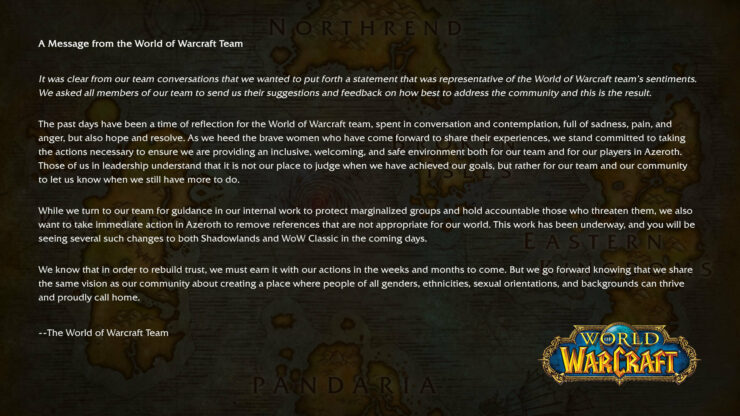 Now, this does sound a little more human than the Kotick letter, though it's still understandably PR'd as much as humanly possible. The reality is that World of Warcraft is a game that was sadly built by a team with an attitude that largely promoted sexual discrimination, harassment and abuse. Even low levels of this could be seen at a public event such as Blizzcon in 2010, where the response to female fans was as demeaning as you could imagine from such people.

Oh god, I'd not seen this before. It's heartbreaking.

Here's a 2010 Blizzcon panel in which a fan was brave enough to ask a panel full of men, including J. Allen Brack (left) & Alex Afrasiabi (right) whether there's scope for some of WoW's female characters to be less sexualised pic.twitter.com/Elaf3K7KVc

The message to fans mentions parts of World of Warcraft that will need to be changed, or removed, as they contain references simply not suitable. An NPC named after Alex Afrasiabi will undeniably be one of the first things to be renamed or removed, particularly after revelations of his office being named "The Crosby Suite", named after the alleged rapist Bill Cosby.

No doubt, several references will have to be changed or removed, and many other issues will have to be remedied, and that's before you look at clearing out the people within Activision Blizzard guilty of either the actions mentioned within the lawsuit or covering up the actions.

Until that time, the words and letters will ring hollow, actions need to be taken and while removing references are fine, a public - honest - apology should be the first action. The only real way to know Activision Blizzard is genuinely sorry is for them to accept the lawsuit. They need to negotiate a reasonable response while sorting out the mess internally.