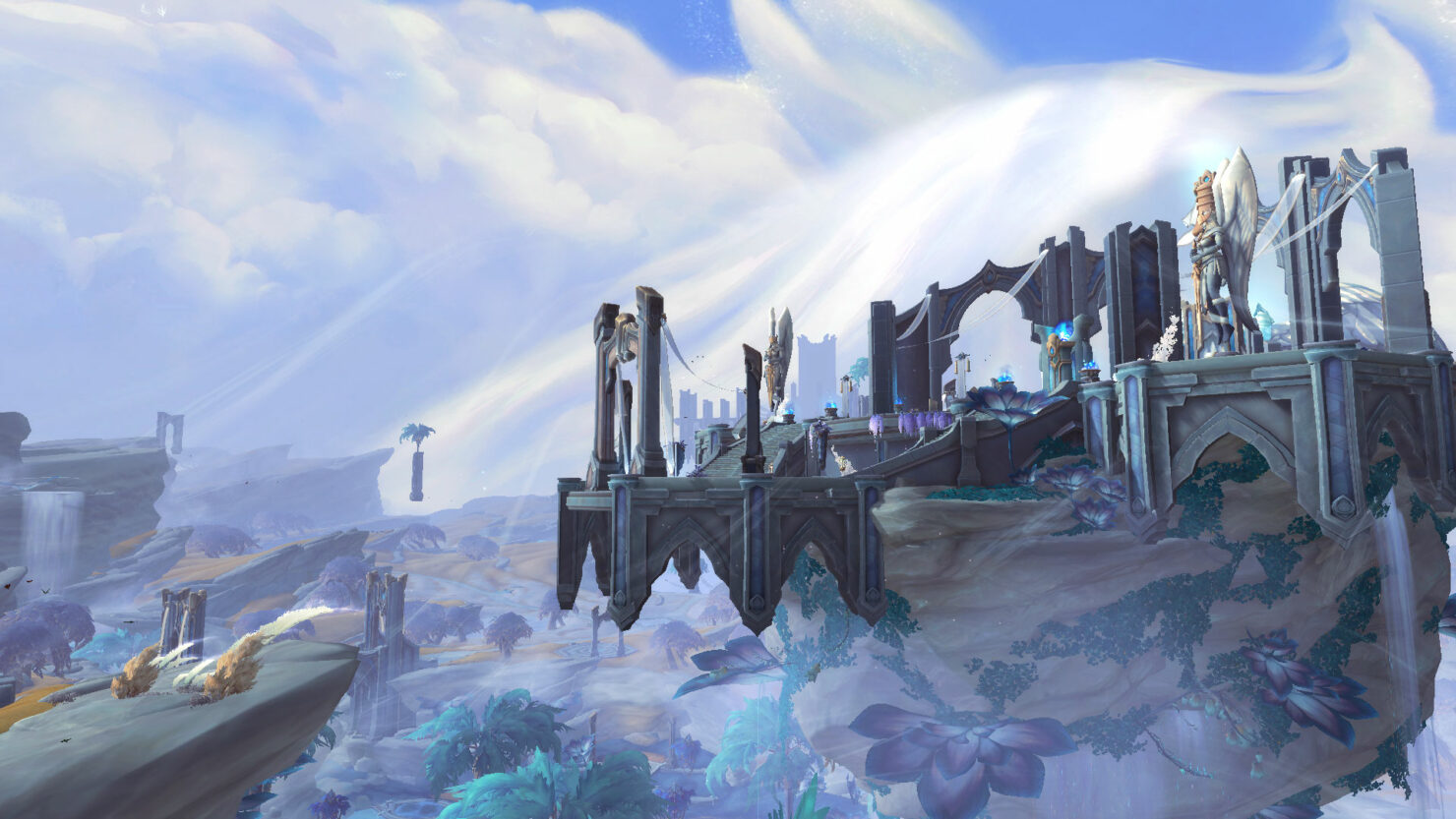 The Shadowlands closed Alpha kicked off earlier this week, and Reddit user ‘Feith’ was among those lucky enough to test out the new upcoming expansion on the World of Warcraft test servers, and he managed to take plenty of screenshots of the new zone in Shadowlands.

The spiritual realm of Bastion will be the first zone that players will enter in Shadowlands and boy, it does look beautiful.

“When first arriving in Bastion, you’ll be greeted by elysian vistas, resplendent skies, gleaming spires, and ethereal sights”, Blizzard wrote upon the announcement of Shadowlands last year. “This paradisiacal realm is inhabited by the steadfast Kyrian, who safeguard mortal souls as they pass into the Shadowlands. If you wish to untangle the Banshee Queen’s nefarious plans, you’ll need to earn an alliance with them.”

Feith’s full set of screenshots consists of more than 80 screenshots of Bastion and we highly suggest checking them out on Imgur. We’ve included a selection of the new screenshots down below:

World of Warcraft Shadowlands will release later this year. The exact release date has yet to be announced. As covered yesterday, the upcoming expansion will feature raytraced shadows and variable rate shading alongside controller mapping support.

A host of new features and activities await players in World of Warcraft: Shadowlands. When they cross into the realm-between-realms, players will be able to:

Explore the Realm of the Dead: For the first time ever in World of Warcraft, players will cross into the Shadowlands and experience the wonders and horrors of the afterlife across five new zones—the gleaming fields of Bastion, the scarred battlefields of Maldraxxus, the eternal twilight of Ardenweald, the opulent keeps of Revendreth, and the horrific Maw.

Claim a Covenant’s Power: Players will be called upon to forge a bond with one of four Covenants that rule Shadowlands’ new zones, setting the tone for their journey through the expansion with a full Covenant Campaign. As they level up, they’ll get new abilities based on their choice, including class-specific abilities for each Covenant—as well as developing Soulbinds with specific Covenant members, which grant them access to that character’s specific traits and bonuses.

Ascend the Tower of the Damned: At the heart of the Maw lies Torghast, Tower of the Damned, a cursed otherworldly prison where the wickedest souls in the universe are locked away. Highly replayable and inspired by roguelike games, heroes are invited to explore its ever-changing halls and chambers and do battle with the minions of the Jailer, Torghast’s vile ruler. Those who brave its trials can claim legendary treasures and help free the heroic spirits wrongfully trapped within.

Every Level Is Meaningful: Shadowlands will introduce a new leveling system, meant to provide a meaningful sense of advancement with every level achieved. Current max-level characters will begin Shadowlands at level 50 and work toward the new level cap of 60.

A New Army of the Dead Rises: To combat Sylvanas’ assault on Icecrown, Bolvar Fordragon— the revered former paladin who took on the mantle of Lich King to keep the Scourge at bay—has raised heroes from among all the peoples of Azeroth to bolster the Death Knights of Acherus. With Shadowlands, pandaren and all allied races will now be able to become Death Knights.

Improved Character Customization Options: A host of new appearance options for all races will be made available to players when they create new World of Warcraft characters (or alter existing ones at the in-game barber shop).