World of Warcraft: Legion – A Chat with Ion Hazzikostas

More from the Q&A session with Ion Hazzikostas

You've brought in the new Artifact system. Could you explain it and the thoughts behind it?

There are a lot of powerful weapons throughout the lore of Warcraft. There's always been a desire to get these weapons into the players' hands in some form. But of course not ordinary weapons. At the same time, we're always looking for ways for players to experience progression and customization beyond just leveling up and getting more powerful stats.

This offered us a chance to combine those two things. To deliver powerful, mythic, weapons and also have them be something that players can invest time and energy in customizing and upgrading throughout the entirety of the expansion, in a way that makes them different from regular items. It also fits into the story in the sense that we need every advantage we can get to stand against the legion.

One of the very first things that players do when they arrive in the Broken Isles is to go out on a customized quest to claim their artifact. With thirty-six different artifacts, one for each specialization, there are thirty-six acquisition quests - one for each artifact. The artifact will accompany you throughout the entirety of your journey through Legion. You can earn power for it by doing everything, from dungeons, raids to questing and PVP. Whatever you prefer doing.

Is it true that the artifact weapons are only usable in this expansion and not future ones. If so, why and how do you explain leaving an artifact in the future?

Going forward in future expansions, we'll see where the story takes us here. There needs to be some explanation as to why you don't use your weapon forever. From a gameplay perspective, the artifact is essential to your experience in Legion and we made a concession that you're not going to get a new weapon upgrade during the course of this expansion. You're going to make it more powerful, customize it, level it up and do all sorts of things. I don't think we want to say that for the entire future of World of Warcraft ahead of us, you'll never again wield another weapon besides your artifact.

You can go and seek out any artifact weapons for your class that you desire. If you want to get them all, you can. We have a number of catch-up mechanisms in place to keep your off-spec weapons caught up with your primary one. Getting them to within about eighty percent of your strongest will be fairly straight forward. if you want to get them all the way there, there's a more significant investment. 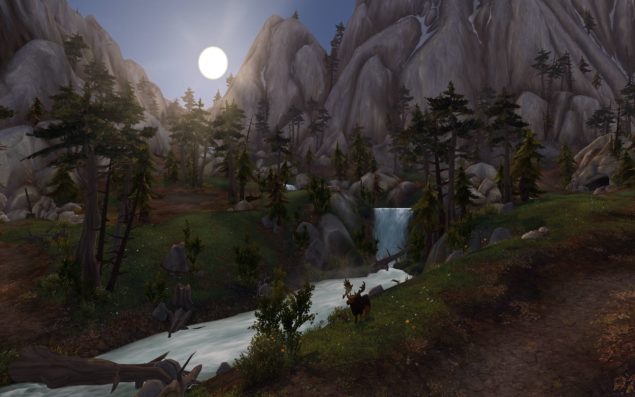 The class orders have been announced, what's the story behind these and the function behind them?

Part of the story of Legion for every player is as well as getting the artifact, you become the leader of your class order. Where the Alliance and the Horde have failed to defeat the legion, the mighty heroes of all the different classes will take up the cause and ultimately hope to prevail. At its core the order hall represents an epic, personalized story for your class. Each class has its own individual storyline.

It has a significant progression system built into it. As you adventure, you can recruit champions to right alongside you in battle to unlock advantages and new abilities. You can send them off on missions. You can also upgrade and invest in your order hall, to customize what you get out of it, whether it's combat perks out in the world or greater efficiency in some areas. You're making strategic and tactical choices the whole way through.

Focusing on lore and story, Suramar appeals to me most of all. How much content has Suramar got now and will it be continually supported. What else do you have for those less inclined to raid and group up?

Suramar will have many weeks worth of content at launch. Patch 7.1 is also going to continue the Suramar quest and campaign with more weeks worth of content. It's important to us that players of all types enjoy the game. Working with this is the order halls, developing them and following the quests they offer,

The world quests will offer more variety to the old daily quest system. While some include PVP, Dungeons, Elite monsters and more, this variety will encourage a lot those not wanting to focus solely on raiding and other group activities.

You've announced the return of Illidan and have just announced that you're bringing back Kharazan. Have you any plans to bring back other old dungeons, raids or other content?

We always think about the story we're telling, whether there are any existing characters or locations that fit naturally in the story we're telling. Certainly with something like Kharazan, which was always tied to the guardian Medivh and the fight against the burning legion as we saw recently in the Warcraft movie, it felt like a very natural place to revisit. We don't have any specific plans to update or bring back other old locations. It's just a matter of what makes sense for the story.

Having mentioned the Warcraft movie. Has that influenced the design process of Legion and where you want to take the story?

Not really. The idea of making the Legion expansion was one that predated our knowledge of the movie. Certainly, as we thought about characters like Khadgar, who specifically appeared in the movie, it informs the role we've given them. We knew a lot of our players coming into Legion would have a familiarity with the movie. The stories compliment each other, but the movie ultimately reflects a piece of ancient Warcraft lore that was the beginning of all of this.

Patch 7.1 was announced very quickly, do you have plans to release new content at a faster rate than the other expansions?

Yes. This August 30th date marks the beginning of a journey, not the end. There's a ton of content and a great world to explore with the story of Legion. Players can look forward to a steady stream of content updates throughout the lifespan of World of Warcraft: Legion. One of our highest priorities is giving players regular updates to keep the world fresh, with new stories and experiences regardless of your play style.

From what has been announced I'm looking forward to it more than any expansion since Cataclysm. This is for one primary reason: Suramar. I last played WoW with the release of Warlords of Draenor, though the last time I was an active subscriber and player was back in the days of Cataclysm. Will Legion bring me back for good? I don't know, but you'll soon find out in our review.