Microsoft is expected to release Windows 10 Threshold Wave 2 in November as the first major non-patch update to the operating system. It seems like we might be seeing some user interface enhancements in the upcoming update, along with a number of optimizations.

Windows 10 is already running on over 75+ million devices, but that's not something stopping Microsoft from refining the operating system. Latest Windows 10 internal builds suggest that Microsoft is continuing to improve the user interface and will bring in the enhancements in the next major feature update rolled out to Windows 10. New animations, updated icons, refined UI elements, and improved context menus are only a few of the improvements that you will notice in your operating system once the Threshold 2 is released in November.

Members of Insider program can experience some of these changes in Windows 10 build 10532 which introduced an updated Feedback app and context menus, however, not all are yet available in the public builds. Following are the expected UI changes spotted in internal Windows Insider builds.

The context menus are now colored grey instead of pure white. Greyed out menus will be preferred by users who dislike having bright lights popping out of the screen, especially at the night time. Microsoft is also tweaking the size of menus along with other small changes. As mentioned before, Insider Preview 10532 also carried some changes to the context menu. Seems like this is a place where you would spot a few tweaks once the Threshold 2 is rolled out. 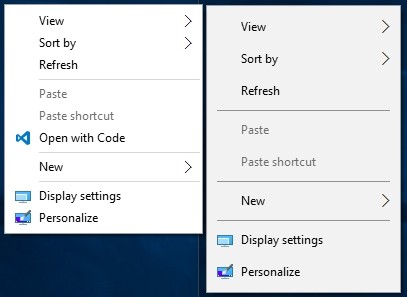 New icon set is another update being brought into the operating system. From Explorer to Win32 control panel, you will now notice new icons while some of the older icons have disappeared from the list. Microsoft is focusing on redesigning some very old elements of the UI in this update.

Apart from these changes, Windows Store also gets a fade away animation which appears when you open / close the apps, similar to the Windows 10 desktop apps.

Earlier expected for October, Microsoft is now scheduled to release Threshold Wave 2 update to Windows 10 users in November. All the new UI refinements spotted in internal builds will probably arrive to Insider builds for public before the update is released.