Last week, we reported how Microsoft had quietly removed deferral options from the Settings app - something that wasn't announced by the company and was only discovered hidden in the documentation for IT Pros. Since this option is used to avoid a new Windows 10 feature update until it's stable enough, the change didn't sit well with many users.

"In Windows 10, version 2004, we removed two Windows Update settings advanced options that enabled you to defer feature updates and/or quality updates by a specific number of days," the company said in a recent announcement. "This change enables those running premium editions of Windows 10 (e.g. Pro, Enterprise, Education) to remain on a given Windows 10 release for a longer period of time."

How exactly does the removal of deferral options enable you to remain on a Windows 10 update for longer?

It appears that some business users were inadvertently being updated to new releases as a result of this option in the Settings app. In a blog post published earlier this week, Microsoft's Aria Carley explains that unless your device is approaching end of service, you don't actually need to configure any settings since Microsoft won't be automatically installing a new Windows 10 feature update on your device.

The option to defer a new update for 365 days may seem like you will be safe from receiving a new feature update for a year, but considering Microsoft delivers two feature updates every year, every six months some version is meeting this 365 days criteria. This meant that devices were being upgraded every six months instead of the intended 365 days.

While Microsoft wouldn't have bugged you for about a year until your device was approaching end of service, your deferral settings were actually messing up with this policy of "let users be until their current Windows 10 version is meeting end of service," upgrading you to new releases every six months.

"The ability to remain on your current version until you choose to download and install the latest feature update or until approaching end of service is only possible when deferrals are not set for the device."

This is where the confusion talk comes in. Carley writes that the change in settings "enables you to remain on any given release for a longer duration, taking a feature update approximately once a year or less depending on which edition of Windows 10 your device is running." This effectively means that as long as you don't set any deferral options, you won't be updated to a new version for about a year anyway.

She added that deferrals "can be a great way to roll out updates in waves to a set of devices across an organization," however, for end users this was causing confusions and surprise upgrades, or what Microsoft calls "some unintended consequences."

To help "prevent these unintended consequences and enable you to stay with a given release of Windows 10 for the longest duration, beginning with Windows 10, version 2004, we no longer display deferral options on the Windows Update Settings page under Advanced options," the company writes.

"This ensures that you have control over, and visibility into, exactly when to install the latest Windows 10 feature update until you near end of service. The ability to set deferrals has not been taken away, it is just no longer being displayed on the Settings page."

The above is important; as we mentioned in our earlier coverage on this that deferrals can still be set using Local Group Policy through Computer Configuration > Administrative Templates > Windows Components > Windows Update > Windows Update for Business >"Select when Preview builds and Feature Updates are received" or "Select when Quality Updates are received" that you can use to defer both feature and monthly updates. 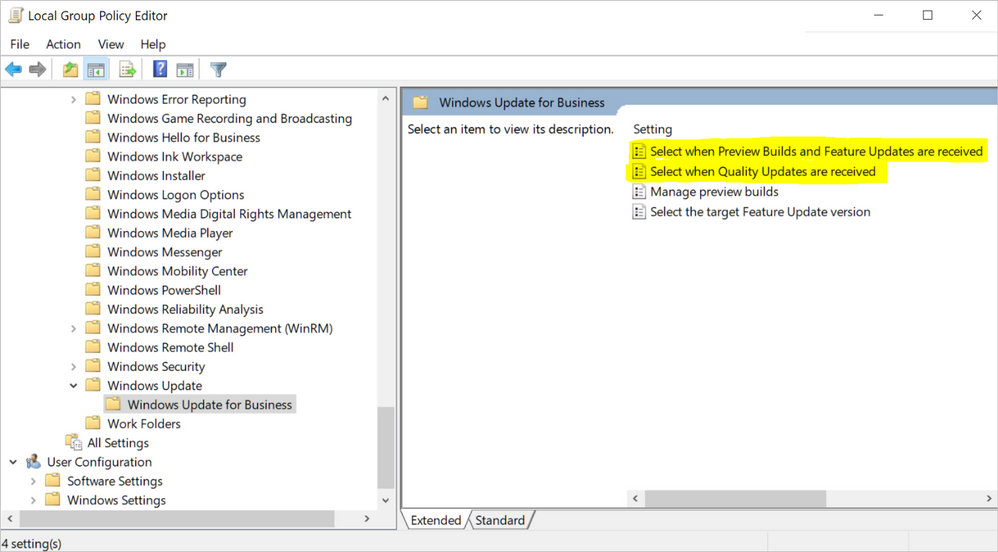 This clarification isn't making everyone happy since many are calling it a poor design decision and lack of trust in Pro users' ability to control and manage their devices. One user commented:

So let me get this straight, by removing the option and forcing it into Group Policy Editor, something only Windows 10 Pro and higher have (without modifying the OS), you are giving the users control over when  to install the latest Windows 10 feature update?

This contradicts itself like mad. This is also a move that Apple would do.

Microsoft, you are now telling your users that they are too dumb to control when updates can be installed on there systems. Given the recent issues with feature updates, this is just going to cause major issues.

Congratulations, you made me compare you to Apple and it's actually a BAD thing.

While it may help prevent confusion around Windows 10 feature updates, Microsoft still hasn't clarified why it decided to remove deferral options for monthly quality updates from the Settings app. Perhaps another change is expected?

As for IT administrators, Microsoft insists that this change does not impact them if they "utilize mobile device management (MDM) tools or Group Policy management tools to set deferrals in order to do validation and roll out feature updates in planned waves across their organization."