Last year, WhatsApp added video calling to its app for all devices, but it seems to be adding more features to it. The popular instant messenger app now seems to be getting picture-in-picture functionality for video calling that makes it more convenient for users to text while on the video call, simultaneously. The new picture-in-picture mode has been spotted in version 2.17.265 that runs on Android O Developer Preview.

A tweet from WABetaInfo revealed the new feature that has been spotted on Android 8.0 Developer Preview. To recall, WABetaInfo has been reporting about upcoming features on WhatsApp for quite some time. The latest report details the PIP mode on WhatsApp version 2.17.265 that is turned on by default in the app. The new feature utilises a specific API that is found on Android O.

The images shared about the new feature does not clarify whether the PIP window on WhatsApp is movable on the screen. Also, it is not confirmed whether the feature will work if the user switches to another app during the session. For in-depth information about the new PIP mode, we've got to wait for some more time until the feature goes live for users on Android. It seems like a pretty useful feature though. 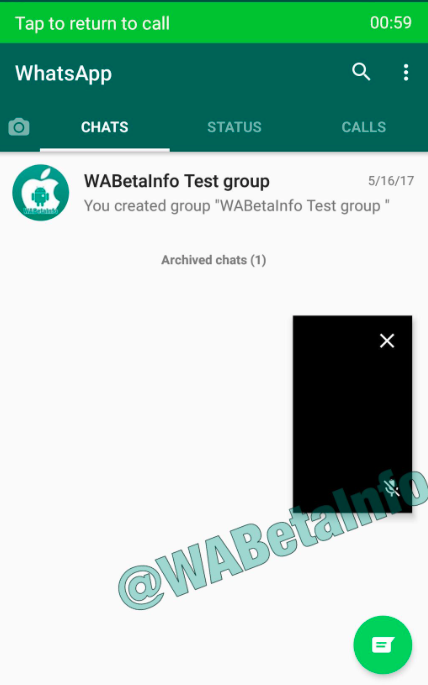 As we already mentioned, the new feature offers convenience to check text messages amidst video calls. It's yet to be seen whether WhatsApp on iPhone gets the feature as well. But the feature needs specific APIs to function, so it is unclear how it works on the iPhone. Earlier this month, WhatsApp for iPhone got new functionalities such as the ability to pin chats, share any file type, and others.

The PIP mode on WhatsApp works like the similar feature on Google Duo that allowed users to keep the video call regardless of doing other actions on the smartphone. The PIP feature on WhatsApp on Android O also lets users mute the microphone.