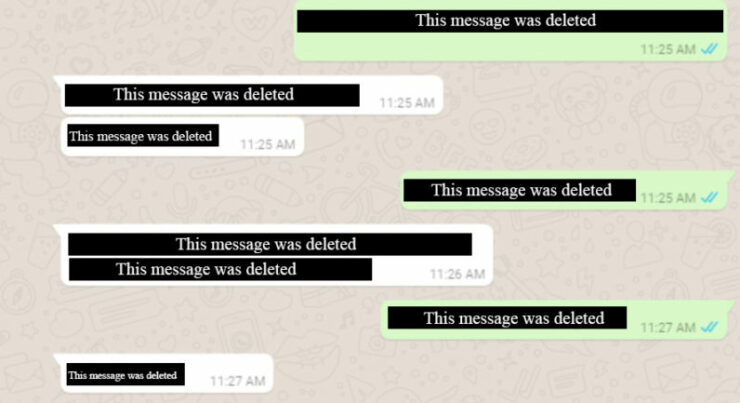 Have you ever sent a WhatsApp message to the wrong thread, shared something intimate with a professional contact or gotten into a bit of drunk-messaging? If you have then I am sure you understand the embarrassment that follows. The desire to leave the planet and delete your existence is real at times like these. WhatsApp has a solution to this problem. Other messaging apps like Telegram, WeChat and Viber already have the option to delete sent messages from a thread. It seems that the WhatsApp Delete for everyone feature will soon be rolled out.

WhatsApp Delete for everyone feature

The WhatsApp Delete for everyone feature will allow users to delete messages that have been sent by mistake before your contact reads them. According to reports tests are being conducted on Android and iOS devices. According to the insider, the dedicated recall server is working successfully and deleting messages. Most users won’t have access to this till the feature is enabled for everyone. So you will have to wait a bit.

The question that remains is that what’s so great about this feature? According to screenshots by the WABetaInfo, the recalled texts will also disappear from the Notification Center. This is the case on both Android and iOS devices. Rumors about the WhatsApp Delete for everyone feature started circulating across the web when users noticed signs of this feature in WhatsApp’s code. Speculations arose that the company could have enabled the feature back in June.

The Delete for everyone feature has appeared in an August beta version of the app for Windows phone. This is a definite sign that the feature will be rolled out soon enough for the Android and iOS devices. However, we aren’t very sure when this would happen so fingers crossed because I am definitely among those who need this feature. Do you want this feature? What are your views on this?