When It Comes To Data Protection, WhatsApp Might Not Be Your Best Bet Finds Report

Government data surveillance has made an increasing amount of users become increasingly concerned about their privacy. In an age where a vast majority of citizens are using the internet for one thing or another, data protection is the responsibility of service providers as well as users themselves. After all, data analytics can give any agency or someone with access an accurate picture of a person without having met them at all. Well, Electronic Frontier Foundation carries out an annual survey of corporations and grades them on a five point scale regarding data security and privacy. And WhatsApp apparently needs to do a lot more when it comes to protecting user privacy, despite it being owned by Facebook. 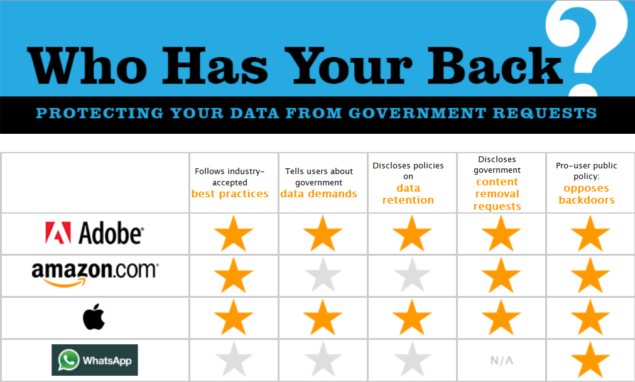 Electronic Frontier Foundation, which has been surveying corporations for five years now with respect to government data surveillance requests carries out an annual survey on a five point scale with respect to corporate policies on managing government requests. This scale can be seen in the image above and for the full survey, you can click here. EFF's five standards include following industry accepted best standards, informing users about government data requests, disclose its data retention policies, disclose government intervention for users accounts and oppose backdoors in pro user public policies.

Out of the five, WhatsApp only gains a point in opposing backdoors and a pro user public policy. In the popular IM service's defense, its WhatsApp's first year on the survey, so the company's still relatively very new. But that still does not exempt it from adopting the best possible practices when it comes to government requests for user data. To check out the complete report for WhatsApp in this year's 'Who Has Your Back' survey, click here. And let us know what you think in the comments section.