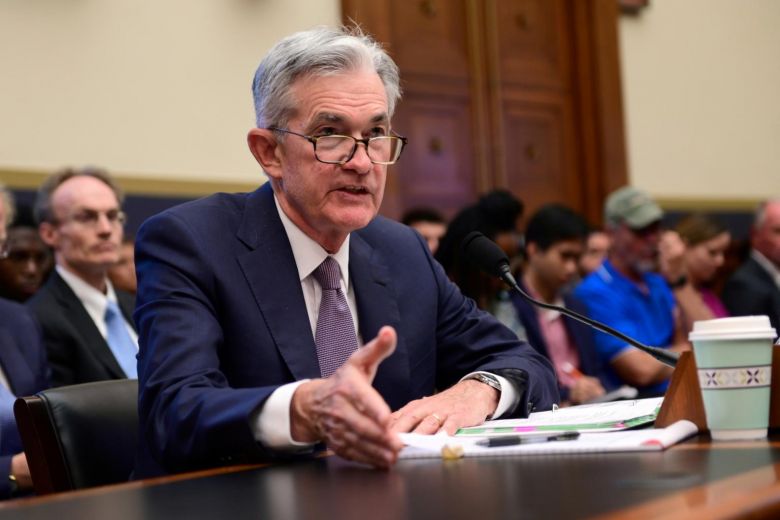 In a week and a half, I’ll be sitting on a beach in the Greek Islands. While I’m there however, I’ll be keeping a keen eye on the markets and that is because we are approaching the next episode in the slowly unfolding drama that is the Fed’s interest rate policy decision making saga. For those that have been living under a particularly large rock in recent times, the Fed had been on a path of tightening monetary policy and putting up interest rates in recent years as concerns for an overheating economy grew amidst one of the greatest bull markets in history. Fast forward however and Fed Chair Jerome Powell has been enduring an extremely powerful political campaign to get him to cut interest rates with President Trump regularly tweeting on the subject, even going so far as to say that the Fed is his greatest enemy in making the US economy great again.

While I’ve gone into more detail in the past regarding the conundrum facing the interest rate policy debate and whether continued rising rates, sitting still or cutting is the right way to go from an economic theory perspective, the fact of the matter is that the market has now priced in a Fed rate cut in July, with some commentators even expecting a 50 basis point cut now instead of the previously guessed at 25, with market watchers generally expecting 50 to 75 basis points in reduction overall for the remainder of 2019. Given we’re in the middle of this unprecedented period of economic expansion, I thought it would be worth looking at what some of the outcomes may hold for what we’re really interested in here at the Wccftech Finance section, namely tech stocks.

Before diving into the detail however, a brief reminder of how we got here.

At the last Federal Open Markets Committee meeting, intently watched for anything which could be construed as dovish commentary from the Fed, the dropping of the word “patient” in the Fed’s approach to watching to see how the market unfolds was universally acclaimed as a huge indicator that the Fed would indeed cut rates in the near future. Dissension in the ranks of the Fed does seem present however given that the Fed embarked upon its previous policy of raising rates amid concerns that there would not be enough firepower in the tank in the event of a recession.

Recessions typically spur fiscal and monetary policy easing to encourage consumer spending and business investment but with interest rates still at historical lows globally and the Trump tax cuts already having been implemented (at great cost to the US deficit), the ability to fight back when a recession does finally materialise is of concern.

However, Jerome Powell challenged conventional thinking in his testimony to congress stating that the long term link between inflation and unemployment has gone away and effectively disavowing the Phillips curve before subsequently walking that testimony back slightly so as to maintain a semblance of credibility in economic circles. Regardless, the testimony was also widely seen as an indicator that the Fed was about to cut interest rates given that it should be able to do so without fears of stoking inflation in the economy.

All of this means we’re expecting action of some kind to cut rates, however there are still considerations which may mean the Fed won’t cut yet. Jobs data is still reasonable and overall economic activity is seen as growing. Stocks are hitting new highs, as are major indices, despite trade war concerns and some small indications of earnings gloom.

Let’s be clear here. A 25 basis point cut is absolutely the expected outcome from the July FOMC meeting. Markets have priced the cut in and stocks are likely poised to scale even greater heights on the back of it. It’s worth keeping in mind however that the market in general is probably not representative of tech stocks in particular, which have huge exposure to China and the ongoing trade war. Even so, the general display of what is now known as the “Trump Put” should mean that stocks across a variety of industry sectors remain on a general upwards trajectory while the President also makes moves to ensure the defence of American tech companies in the face of French plans to implement new tax rules which look like they may be targeting US big tech firms.

So in general, we look to see broad technology sector growth although of course the market will still respond to individual company news whether good or bad more directly. Netflix (NASDAQ:NFLX) has seen its stock be particularly punished as we reported (here) after a poor earnings report saw the stock lose over 18% last week. Other tech companies with less exposure to China should continue to do well out of a rate cut and here we talk about companies like Amazon (NASDAQ:AMZN), eBay (NASDAQ:EBAY), Salesforce (NASDAQ:CRM), Microsoft (NASDAQ:MSFT) and others, although 25 basis points likely just means a continuation of current conditions.

It’s worth keeping in mind however that we have seen a recent raft of late stage economic cycle IPOs and although these companies have done well out of the process, raising significant funds the market has slightly punished them given the ongoing losses being racked up as they attempt to monetise, along with other companies which have been public for a while but which are still struggling to make their business objectives materialise. No amount of interest rate cuts is likely to turn these companies around individually and Lyft (NASDAQ:LYFT), SNAP (NASDAQ:SNAP), Slack (NASDAQ:WORK), Uber (NASDAQ:UBER) and others are at the stage where they are probably reliant on an interest rate cut to maintain their stock price growth or prevent it from collapsing further.

Investors in companies with large China exposure both in terms of revenue as well as in terms of business dependencies will be somewhat hoping for an interest rate cut but will have their eye on other areas such as future talks between the US and China on trade as well as how the US government intends to proceed on Huawei and concerns over intellectual property transfer via joint ventures and other methods. As such, Apple (NASDAQ:AAPL), NVIDIA (NASDAQ:NVDA), AMD (NASDAQ:AMD), Qualcomm (NASDAQ:QCOM), Broadcom (NASDAQ:AVGO) and others (particularly semiconductor firms) will likely still be in volatile territory with even greater exposure to and unexpected moves in monetary policy.

Also remember that companies which are heavily leveraged in terms of debt exposure would also like an interest rate cut. Central bank rates feed through to most areas of an economy including the cost of borrowing for corporates via bond issuance. Companies which have long term questions around their ability to become profitable and which continually rely on the market for raising capital may struggle in a climate where rates are higher or do not get cut over the medium term. Tesla (NASDAQ:TSLA) springs to mind here as still an incredibly heavily shorted stock (over 23% short interest), a lot of debt (although some of it is in the form of convertibles) and an ongoing struggle with profligacy and profitability.

25 basis points then (0.25%) probably broadly means little change while a 50 basis point cut would likely spur some further gains across the board.

While it’s common to read that market expectations around a rate cut are set in stone at this stage, it’s important to remember that much of the tech world is heavily reliant on China for its supply chain and revenue growth story which probably means it’s slightly less reliant on a cut than other sectors to maintain its upward trajectory.

The possibility that the Fed will leave interest rates untouched still exists of course and many in the industry who are looking at the broader macro-economic picture feel that the current Fed approach of finding EVERY SINGLE POSSIBLE REASON it can to cut rates only really makes sense with some spectacularly cherry-picked data (and of course political meddling). So while earnings watchers this week will be focussed on looking for commentary talking about freezing or slowing of capital expenditure, lower consumer demand and other factors for the future, keep in mind that equities have already seen large outflows into defensive asset classes for much of the year already. 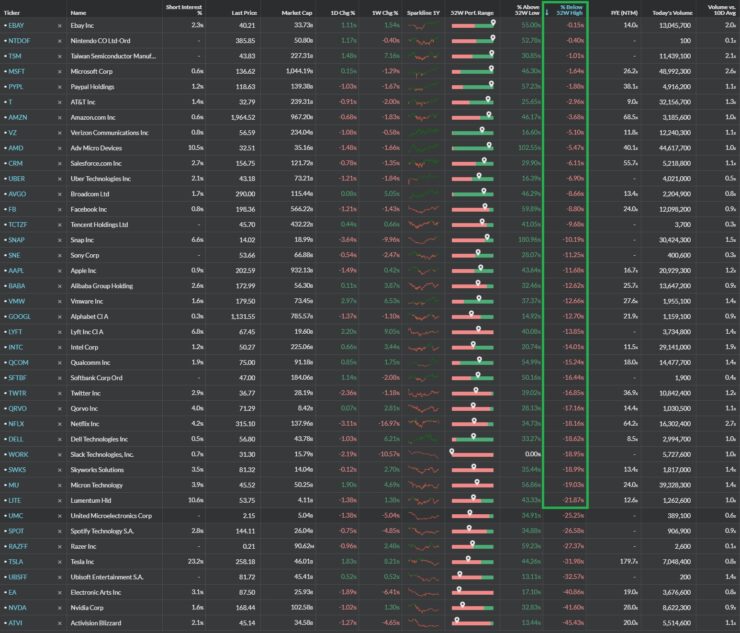 A lot of the stocks we follow here at Wccftech are within 25% of their 52 week high watermarks, even the loss making ones. No rate cut isn’t going to be great in terms of broader sector rotation as well as asset class rotation if institutions decide to go on the defensive and should no rate cut materialise AND no good news be forthcoming on the trade war front, it’s quite possible/probable that tech stocks would take a significant battering, but no rate cut by itself may not hit these firms as hard as it could other industry sectors.

It’s probably worth briefly mentioning here that the obvious third option doesn’t particularly bear consideration. A rate hike at this stage, while unlikely to materially affect the immediate position of many companies is so contrary to what the market is expecting that it would likely have a major detrimental hit on stocks across all industry sectors. Unfortunate given that many feel interest rates are still too low but the market wants what it wants and has been told to expect.

Technology stocks have a lot both weighing them down as well as propping them up at this stage and that is why we’re seeing such large price movements in the stocks as every little piece of news serves to underline retail investor sentiment in one direction or the other significantly. Keep in mind that the institutional market still carries great weight and that it is slower to move with regards to entering into or unwinding large positions that are built up over time, but that the market is so jittery given the multitude of macro-economic factors which could both help or hinder stocks simply shows where we are in the game.

As President Trump gears up towards his 2020 election campaign, the stock market and its ever greater heights will increasingly play a part in how much pressure he brings to bear on the Fed. Even if the Fed cuts and a recession hits before 2020, it’s likely that Jerome Powell will bear the brunt of the blame for it in what will likely be stated as its slowness to act being the cause of the downturn.

Technology stocks are the undoubted stars of this economic cycle and have returned phenomenal growth since the financial crisis. The old mantra that “you can’t call tops and bottoms” is a worthy one to keep in mind as people point out that first half market growth in 2019 has left a lot of people who have shifted or are moving their portfolios to be defensive eyeing equity gains enviously, but when the music stops (assuming it does) and recession appears, it may be them having the last laugh.

Ethics: I am currently long government bonds and have no direct holdings in any of the companies mentioned other than via pension funds.