The Star Wars Battlefront open beta is well underway and the servers are very full, attesting to the popularity of the franchise and of the anticipation of this particular game.  Already, oddly enough, there have been quite a few people banned immediately upon entering servers by the fairfight system.

Keep in mind that the performance here was captured from the beta test of Star Wars Battlefront, and that it in no way represents the final product.

But aside from those strange cheaters getting a headstart on ruining the fun for everyone, it seems to be a fairly enjoyable game that imparts enough of a difference from Battlefield to be unique. The sound effects, animations and  Though there are two modes and one map each available to play in, the beta is short and the final game will have plenty more to do. There's definitely a different feel to it, and it's more than just a simple 'update' or re-skinning to Battlefield.

Star Wars Battlefront is based on the Frostbite 3 engine, and an evolution of that as well. It's a great performing graphics engine that generally scales well on a lot of different hardware. It also tends to look fairly decent even with the effects turned down a bit, too.

Today we'll take a look at what performance is like with everything turned on to Ultra with FXAA on High. The reason is simple let's see what the worst case scenario is and if it's even playable on a variety of different GPUs. Also, we're using two test systems today, one with a 5960X to show the best possible performance, and one with an AMD 860K as the CPU to show how a lower end system might perform as well.

Due to the 860K being in an ITX case, not many cards would fit, though I was able to put in at maximum, a GTX Titan X for comparison, though it's likely not a realistic addition, but it's certainly interesting to see how it performs.

For this test we used the same settings across three resolutions for the 5960X and across only two resolutions for the 860K. I felt it not necessary to test 4K with the AMD rig, as it probably won't be used in that type of scenario anyhow. To test, we played through a round of Walker Assault, and recorded the average framerate. 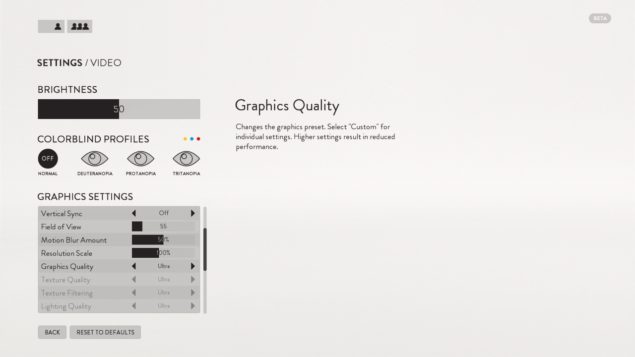 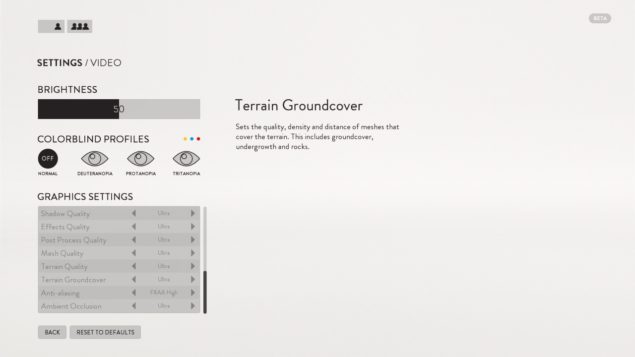 And of course, now for the test itself, the main course. 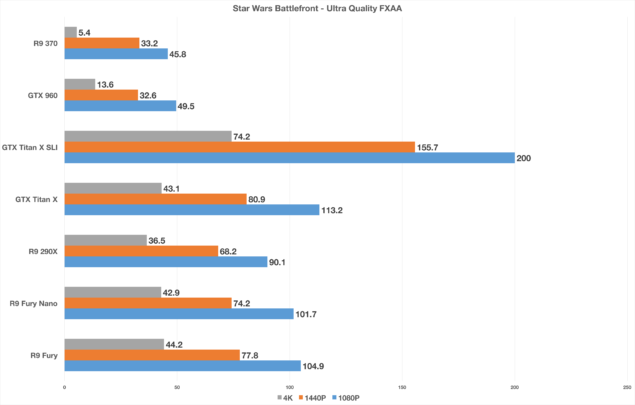 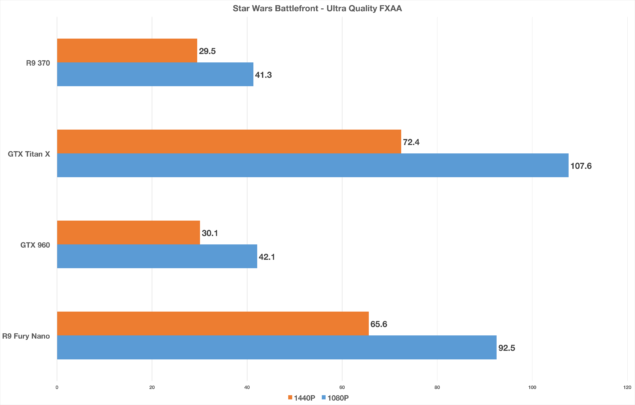 As you can see, Star Wars Battlefront runs very smoothly across both vendors, being an equal opportunity engine, for the most part.

[Update] SLI, once the profile is properly applied, works as expected with a near 100% increase in performance. 200FPS seems to be the hard top limit and the Titan X's maxed that out easily at 1080P and hit that ceiling frequently at 1440P. An impressive showing. If I had another Fury of which to CrossFire it with, I would certainly give it a go, and it would hopefully scale just as well. It's important to note that there didn't appear to be any micro-stutter. That is, it wasn't noticeable while playing.

What was even more surprising was how potent the 860K was despite being theoretically limited in both IPC and processing threads. The higher end cards are obviously CPU limited to a great degree, though the performance is more than adequate. What's even better is that the feel of the framerate was actually quite stable. No serious glitches or other large glaring problems, and this is a beta.

And that's that. Let us know how it's performing for you and if you're having any issues whatsoever with it. We happen to be enjoying it very much, but of course not everyone is going to hold the same opinion. Thankfully, though, Star Wars Battlefront is capable of performing well on a variety of hardware.