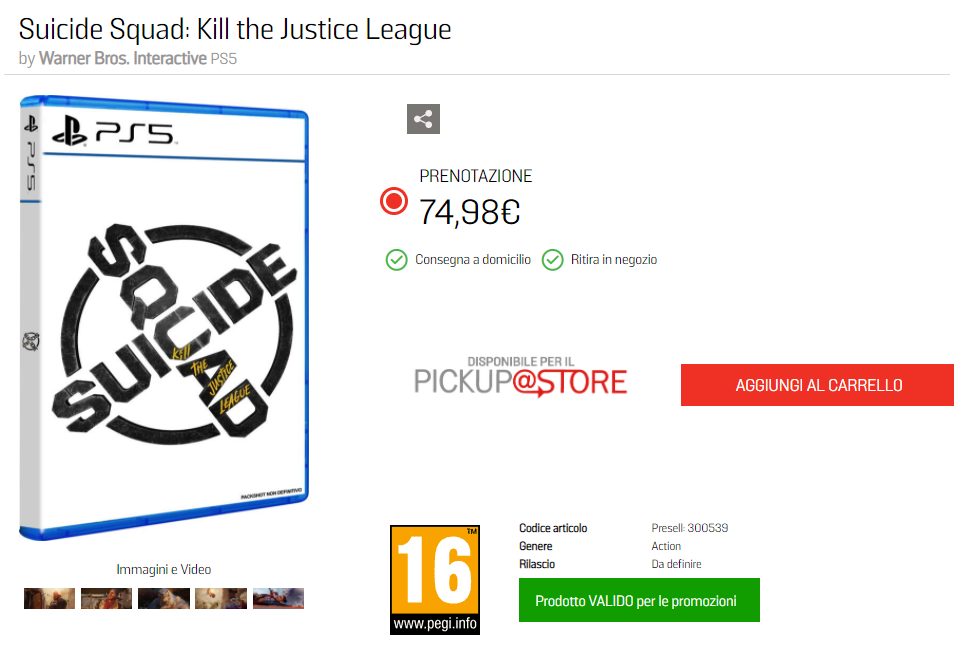 Ever since the announcement from Take-Two that their game prices would be increasing in price for the next generation, I've been saying that this price hike is coming from everybody. I made this point when speaking about Ubisoft's financial results as well as saying it repeatedly on our Podcasts.

It is a curse being able to see these things coming (such as me being right about the PS5 rest-of-world delay where everybody was still adamant it would release on the same day worldwide), but I can't stop the visions and yet another vision seems to be coming to pass. So yes, game prices are going up, not that it took much guessing after Take-Two and Sony, as well as the earlier news that other publishers were courting the idea.

The confirmation that WB Games will be joining in with the price hikes comes from GameStop Italy (courtesy of ResetEra user Raigor), with screenshots showing a price hike to €75 for Gotham Knights and Suicide Squad: Kill the Justice League. This is lower than the €80 RRP set by Sony for upcoming first-party PS5 releases, but still an increase on the €70 already paid in Italy (and likely the rest of Europe) for premium "AAA" titles.

The concerning thing for me is that the greed of the video games industry is going to price itself out and it's unfairly punishing different parts of the world. €70 is roughly equal to $81, so the argument of tax is already invalid even when you look at the coming price increase to $70. Distribution isn't an issue because copies of games, for the big publishers, aren't printed in the US and shipped over to Europe. Not to mention digital distribution, negating all of those concerns.

There is also the arguments from those living in fantasy-land, like Corey Barlog, who state that they prefer a price increase over cash-grabbing tactics like mtx and in-game gambling mechanics. The sad thing is that the price increase will not remove these tactics, NBA 2K21: Casinoball is proof of this, still containing in-game gambling mechanics like the card packs and the pachinko machine.

Anyway, this has delved more into an opinion piece than that of the news itself. The news is simple: WB Games are following the leader and increasing base game prices for the upcoming console generation.