Warner Bros. Could Be Developing an Open World Superman Game

The developer behind Batman: Arkham Origins is working on a new open-world action game, and the studio has revealed up a little bit of insight into its current work through a slew of new job listings. WB Games Montreal is looking to fill 15 positions, among them a game designer, senior level designer, and technical director.

“a new IP project for next generation game platforms.” 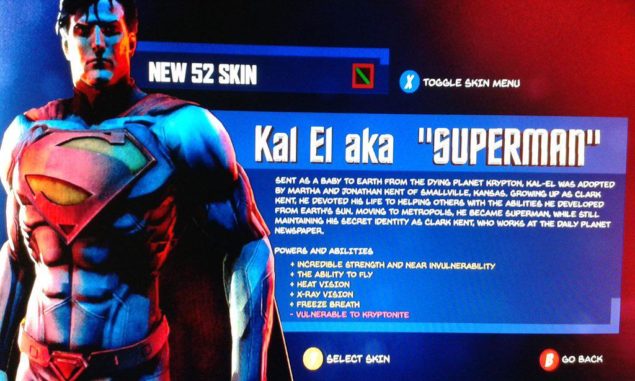 The screenshot shows off a menu where the player could select the main character’s costume, and also lists Superman’s abilities as well as his vulnerabilities.

While the above image can very well be a fake, the fact is that both Rocksteady and Warner Bros Montreal could be working on a new superhero open world game

If Warner Bros. is the studio behind a Superman game, Rocksteady could be undertaking a far bigger task in the form of a Justice League title. The DC Universe holds immense potential for the publisher and they will definitely take advantage of it anyway they can. Hopefully these rumors turn out to hold some truth behind them but we must consider the possibilities that they could also be fake, part of some future DLC or hidden options in Batman Arkham Knight.

NeoGAF forum member Sectus has discovered a variety of content not available in the main game, like extra costumes for Batman, Catwoman and Robin, as well as extra AR challenges. These may be added in future DLCs releasing at a later date for Batman Arkham Knight, or may very well be scrapped ideas that did not make it into the final game.

The challenge mission below contains some spoilers in its description:

Warner Bros has. issued a press release a couple of days ago to announce the release date for the Batman: Arkham Knight - Batgirl A Matter of Family DLC, in which they did mention that the updated PC version will be made available soon.

“The work is significant and while we are making good progress on improving performance, it will take some time to ensure that we get the right fixes in place.

Batman Arkham Knight is available on the PS4, Xbox One and PC. We will bring you any new information about a potential Superman game or any other new supehero IP from Warner Bros. as soon as it becomes available.