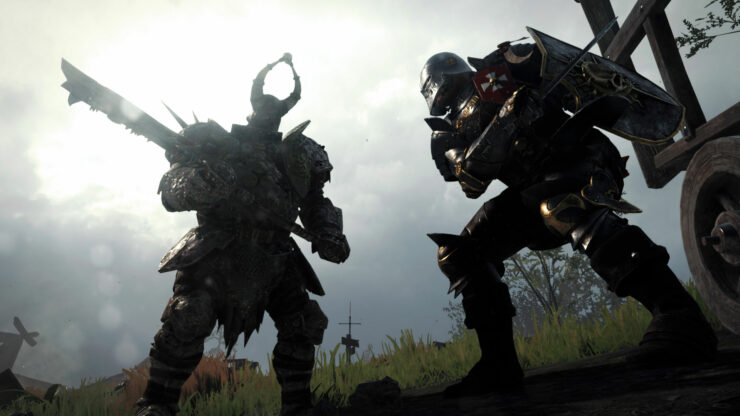 After its initial announcement back in August and worldwide reveal in October this year, we finally had the chance to play a very short demo for the greatly anticipated title, Warhammer: Vermintide 2. Available at Paris Games Week, this demo is our first hands-on look at the game, which gave us a quick taste of what’s to come in Warhammer: End Times – Vermintide’s sequel.

Promised to be even bloodier and darker than its predecessor, Warhammer: Vermintide 2 returns with five playable heroes, providing fifteen unique career paths that will equip players with different weapons, talents and abilities. Similarly, to the first Vermintide game, players will be able to join forces with their friends for a four-player co-op experience, while attempting to take on the most fearsome foes yet: the combined forces of the Skaven horde and the Chaos Army. In addition, developer, Fatshark Games, has also added a Heroic Deeds System – in which players will be able to acquire quests through the new loot system. Not only will these quests be shared across your party, but they will include special challenges that increase the difficulty, put you against multiple minibosses in a row, and more.

The demo allowed me to play as either Markus Kruber, a knight wielding a Great Hammer or Kerillian, a Shade capable of hiding from enemies while in plain sight. After choosing a hero, the one I hadn’t chosen, plus two more, (Bardin Goreksson and Victor Saltzpyre) were added to my party and we were dropped just outside the small village of Ussingen. My main objective was to locate a Manor House filled with loot and along the way, I encountered multiple hordes of Chaos Warriors. Playing as Kruber ensured that I could just smash my way through each mob without taking too much damage. Kruber also has a strong ranged weapon that resembles a long-barrelled gun, which is great for landing headshots on those bumbling Chaos Warriors. He will periodically deal fatal damage that replenishes his health and can charge into enemies with his active ability. Alternatively, playing as Kerillian equips you with a spear which deals additional damage when attacking enemies from behind. This hero also carries a crossbow which can be utilized for attacking at range.

There were no difficulty settings in this Warhammer: Vermintide 2 demo, but I imagine it was set to one of the easier modes as the Chaos Warriors didn’t prove to be much of a problem to deal with and were defeated quickly. After making my way through the burning rubble at Ussingen I finally encountered the Skaven, who were also quite tame. Again, on a higher difficulty setting, I’m sure these mobs would be a lot trickier to handle. I also had the chance to fight a Chaos Spawn, which was slightly more challenging. This strange creature was reasonably slow and spent the majority of the fight swiping at various members of my party. Using Kruber’s ranged attack to chip away at the Chaos Spawn’s health appeared to be quite effective here. There were also other items located just before the Chaos Spawn area, such as ‘The Potion of Strength’ and an Incendiary Bomb that made the fight easier. It’s worth mentioning that your party can die if they take too much damage (as you’d expect) but it is possible to revive them if you can find a safe space to do so. The AI party members were also able to revive each other, which enabled me to finish off the enemy while they healed themselves.

From the tiny snippet of the game that I’ve seen so far, it seems as though fans of Vermintide have a lot to look forward to. With a new weapon and loot system, new maps and the inclusion of Steam Workshop support, Fatshark are improving the apocalyptic setting of Warhammer End Times with the community in mind. You can find out more about this sequel thanks to our recent interview with Fatshark; luckily, you won’t have to wait too long to see more of it as it's scheduled to release in Q1 2018. Fatshark will also be running a number of beta tests before the launch of Warhammer: Vermintide 2 and have also confirmed beta access for those who preorder the game on Steam, so keep an eye out for that.