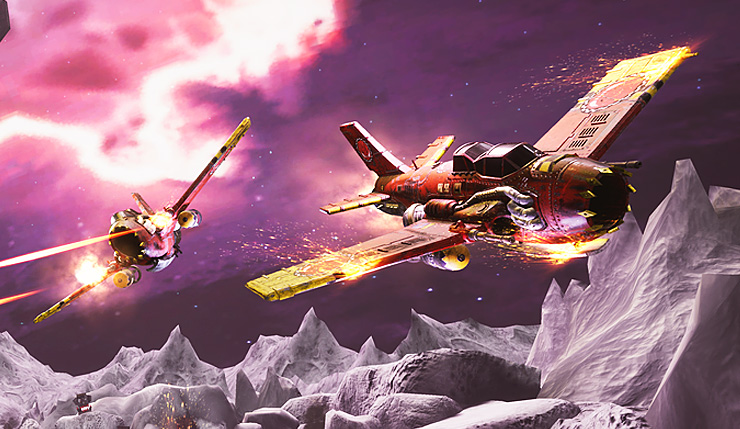 Even though there are a lot (a lot) of Warhammer games out there, I honestly never expected to see the franchise name attached to an aerial dogfighting game, but, well, here we are. The newly-announced Warhammer 40,000: Dakka Squadron casts players as an Ork Flyboy, who must climb the military ranks by blasting other green pilots out of the skies! Check out Dakka Squadron’s first heavy metal trailer, below.

Looks like some fast and furious fun. Dakka Squadron is being developed by Phosphor Studio, who has mostly worked on VR games in the past, so we’ll see if they can deliver a solid flight sim. Here’s a bit more official detail about Dakka Squadron:

Warhammer 40,000: Dakka Squadron is a fast-paced, aerial shooter where the player is an Ork Flyboy, taking to the skies to do what Orks do best - fight! With 3rd person, action-packed gameplay and intuitive controls, players will choose a Waaagh! (or campaign) and take part in a series of missions across alien worlds.  Players will fly against insane odds, blasting away with their Supa-Shootas against enemy air forces and ground targets, while unlocking new weapons and upgrading their Dakkajets to be the most “dead killy” Flyboys in the sky.

All of the player actions revolve around fighting.  Building and crafting is for the grots. Choose an Ork Clan and customize your squadron to augment your play style. Fly Dakkajets, Burna-Bommas, and Blitza-Bommas, equip them with an array of guns, bombs, and missiles, learn special maneuvers, and unleash your dakka to conquer a galaxy riddled with ancient enemies.