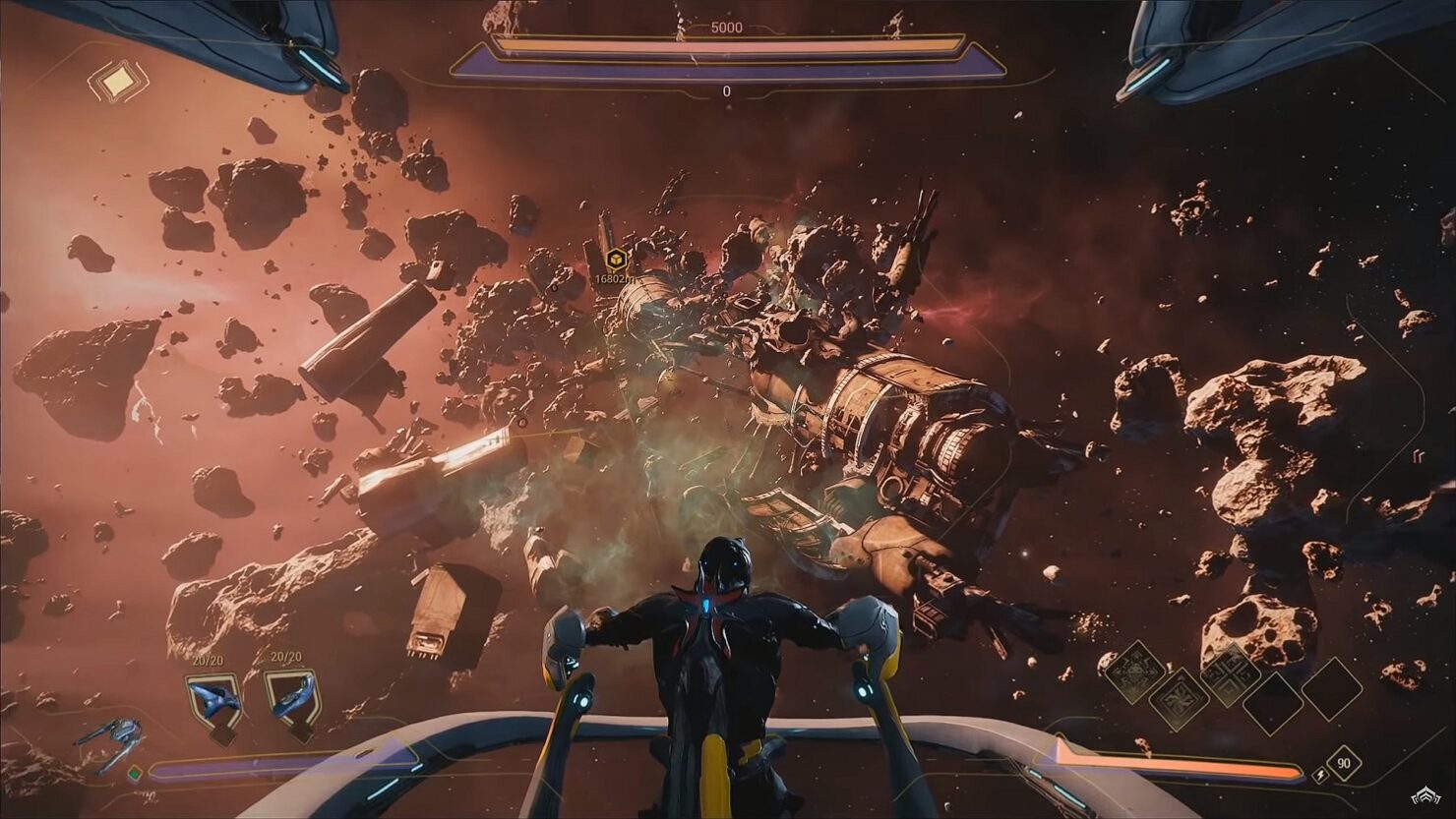 A couple of days ago, we were invited to check out a 'virtual' (that is to say, remote) demo of Empyrean, the next major expansion coming to Warframe in 2020 that was previously known as Railjack.

The main takeaway we got from the presentation, other than the impressively seamless transitions between space combat and boarding other ships, is that Railjack missions are not geared towards solo players. In fact, Rebecca tried and ultimately failed (despite having a high-level pilot) to juggle all by herself between all the mission's objectives, from destroying a certain number of enemy spaceships to disabling the defenses of the superweapon (the main goal of the mission) and of course fending off NPC boarding parties to her own ship. She remarked multiple times that the system has been designed with multiple players in mind so that someone is piloting the ship while others take care of other tasks at the same time.

After the demonstration ended, there was a roundtable Q&A session with her where we learned several additional details regarding Empyrean. Also, if you're a Warframe player, you might want to keep an eye on The Game Awards tomorrow as there should be an announcement there.

[Emma Kent from Eurogamer] I have two questions. One, what sort of mechanisms do you have in mind to make progression easier for solo players in Railjack?

The solo design is going to be built around the command intrinsic. We're not releasing with this. This is going to be the way for solo players to progress and earn points to equip NPCs on their ship that persist in combat. So what that looks like is you can enable NPCs that auto repair breach, that auto put out fires, that fight out boarding parties. Everything you saw me try to do case by case individually as a solo player, you'll eventually be able to use the command intrinsic to command others to do for you. And that is how the solo design will be approached.

My second question. Earlier today, Minecraft cross-play was announced for PlayStation 4, so I was wondering if there's been any progress towards a cross-play solution for Warframe.

I mean, honestly, if I wasn't working on Railjack right now, that would be my number one thing to do with Warframe. We have such a variety of players across all our platforms and for them to have the ability to transfer their accounts around (cross-save) would make the experience, I think, so much more social for everyone. So if it's not Railjack, we're working on it. It's definitely going to be that, so I wish we had it right now.

[Yours truly from Wccftech] I was wondering if there are any plans for larger PvE raid content in Railjack? Also, is there any chance of you adding a PvP mode to Railjack?

Right. So back in the day, we did support the eight-player missions for raids. Right now there are no plans to support it, but I bet you some programmers are having fun in their spare time seeing if we can support eight players, but there's no feature planned for that just yet. For PvP, I think that's sort of the buzzword for us for the next year because we haven't actively supported PvP pretty much at all this year. We've really let it sort of live on an island without much dev attention. Depending on how the Empyrean launch goes for the PvE set, it might be worth our time to recalibrate our PvP game for Empyrean but it's really just a matter of what our community latches onto. So that's sort of where we are with our PvP existence right now.

[MJ Guthrie from MassivelyOP] I noticed you just flew through the small asteroid debris but were dodging the large ones. At what size do pilots need to worry about asteroids damaging their Railjack?

Ah, that's a great question. If we take a closer look at the intrinsics menu, we'll see things like collision damage can be negated not fully, but it can be semi negated at rank four pilot. So by the time you're ranked four pilot, you'll be taking less damage from collisions. And by the time you are ranked six or seven pilot, you'll be doing more damage with your collision (some abilities allow you to fly into the enemy). And we have a ram sled ability, which I have equipped which allows you to essentially have a particle ram on the front of your Railjack and the better pilot you are, the more damage you'll be dealing with that. At some points in my play sessions, I've been running through low-level enemies with my Railjack and just killing them, which has been pretty awesome.

[Leya Jankowski from Mein-MMO] At the beginning of the presentation, you said you changed something up in Warframe, except for just getting your spaceship and getting even more powerful. Can you elaborate on that one? What is the big change with Empyrean?

Well, it's a change in the approach of power level. Right now everyone's going to be having the same starting point and Warframe and sort of what I meant by that was a lot of games that released seasonal content reset power levels. In our case, we have played areas that have been earning and making the cells more powerful for six years. So when we release something like Empyrean, everyone's starting from scratch again. However, if they have six years of power accrued, it's going to make those boarding parties go by a lot more efficiently and it's going to allow you to specialize based on your skill level and Warframe. You really don't want a new player being on the away party, you want to save that for the veterans with their power. And with the Railjack in particular, if you're with a squad, you all earn the same loot. So even if you are a new player, if you're with someone that's getting tier-three wreckage, you'll have that and you'll be able to use it eventually. But if you're just a squad of veteran players, you'll again be sharing the same. Because everything in Railjack is a separate progression in terms of the power you'll be earning and the only power you prematurely bring to it is your Warframe itself.

[Marcel Kleffmann from 4Players] Why did you decide to remove the active energy management during Railjack missions? I think you showed this during TennoCon. Was it too chaotic?

Honestly, that's just the result of playtesting, playtesting with people that have a lot of roles they already need to fill, having energy management on top of that just didn't feel as fun as we thought it would. So before for example, you know, you could do auto fire removal, which is still possible, but at this point, now everyone's actively contributing to the success of the mission. And the Railjack you're bringing has more power options, before we weren't sure about how much we were going to let you do real-time and because of the tech it was kind of limited, but now you not only get to cast three powers, you can have up to three tactical slots. It's just all part of a more prepared knowing what your information without someone micromanaging the actual active abilities.

[Adrian from AusGamers] Are you able to provide any hints as to how Railjack/Empyrean might fit into the upcoming new war and from there to serve to tie the disparate islands of Warframe's current content into a cohesive whole?

Let's just say that the experienced Railjack players will find themselves going into the Veil and Proxima area, which is the true outer reaches of the Origin system. And it's not about how far they'll be going out of the Origin system, but what may have made its way into the Origin system. So we wish our players the best of luck with what awaits them, and everyone had better start working to get ready for the upcoming new war.

On the second part, I think that's a really tricky question because the two major updates these past two years have been open worlds and we ourselves have referred to them as sort of the islands of Warframe. And yes, they incorporate Archwing but they don't do it in space. So what we've done here is we've connected on foot missions to the Grineer to are going to a brand new spaceship that ties it all together, the points of interest players will be coming across will be new, but players will start to realize like 'Oh, this is me boarding and Grineer galleon from the outside and doing an assassination mission. Oh, holy crap. This is an asteroid level that I've played when you guys released the asteroid tell set but I'm actually boarding it from the outside, going in doing a sabotage mission and then heading back out.' So fundamentally, it's connecting every type of content we've ever released from Archwing, to sabotage to boss fights, and now it's just the beginning of how we're going to connect everything on top of that. Because we have a lot of factions to go, whether it's Corpus or Infested, and we have a lot of big plans for Empyrean development, so you're going to see all of the familiar things and Warframe you like such as the slashing missions start coming together with some crews leading the co-op experience.

[Unnamed press] Character customization is a big part of Warframe. Will a similar level of customization be possible for your Railjack?

The outside and the inside are completely customizable, nameable, you can put your glyph on them. Right now they don't support decorations, but we do support skins, among other things, so we're definitely dipping our toe into the customization waters. I would say more than dipping our toe. There's a lot you can customize right off the bat. And then once the crew aspect gets added, that'll be, you know, truly bringing customization to life.

Did the fan reception at TennoCon make you change anything for Empyrean?

It did. Basically, the 2019 TennoCon showcase was Empyrean at its most ambitious. And for us, the release cadence is going to have to live up to that. So while we're launching with the core foundation, the progression, the Grineer as an enemy, there's going to be a lot of what players saw that won't be there as well, such as squad link and the Lich integration, which are two huge things for us that are going to be a part of the future of Empyrean. But getting players calibrated with what the core expansion is, is hugely important. And it's changed a lot since TennoCon, again, the active energy management being one thing, but also just the way we dealt with upgrades and pickups at TennoCon, no one really had an idea about the core progression with intrinsics, among other things, so that'll be a whole new progression system for players to figure out.