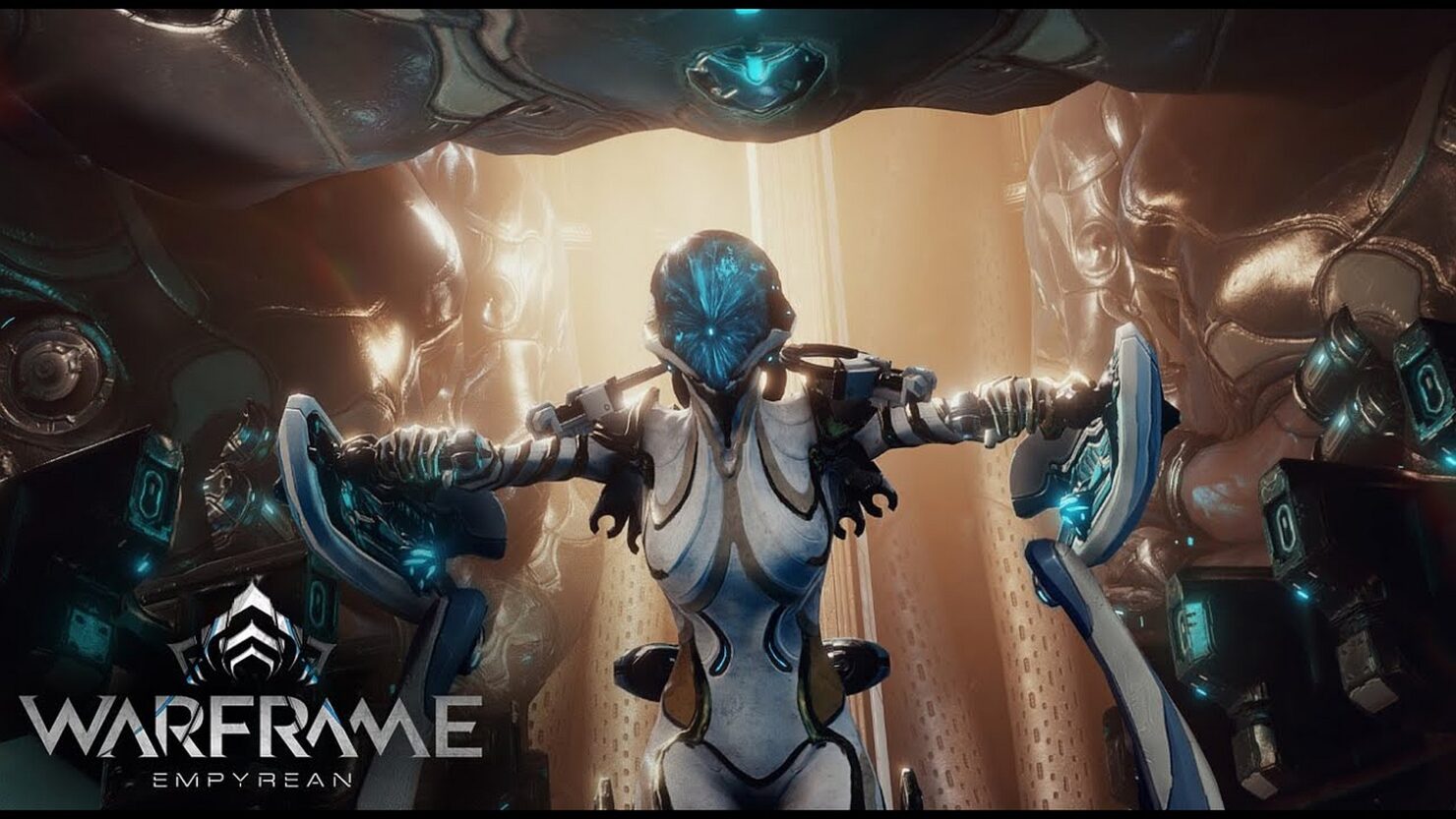 While we were in Los Angeles for E3 2019, we managed to catch up with Rebecca Ford from Digital Extremes right after the PC Gaming Show, where the developers debuted a new teaser trailer for the upcoming Warframe: Empyrean expansion due for release this year.

Our chat with Rebecca, Live Operations and Community Director for the game, ranged from Empyrean itself to everything Warframe on a technical and mechanics point of view. Enjoy the read and remember that TennoCon 2019 is scheduled for Saturday, July 6th in London, Ontario, Canada, with lots more details on Empyrean expected to be dropped there.

So Empyrean is the new name of Railjack. Why did you pick this name?

It is rooted in a lot of the team's deep love for the grand and a throwback to a time when the scary aspects of history had roots in the air.

It's been a while since you first revealed Railjack. What's happened since then during the development of this expansion?

It's been probably one of the more difficult updates we've ever been building because it's big picture. And we had the community to serve during the year between the last reveal and now. And to make something like Railjack fun, to make it feel Warframe, to make it encourage value and existing systems we built like clans, it's an art form. It's designed really to bring all of those things together for such a grand scale space adventure, basically.

You've also been remastering older Warframe zones. How did you accomplish that? Did you have to split the team?

Yeah. So basically, what's happened is for the Jupiter remastered that occurred with the Jovian Concord (Update 25), that had a team of level designers, artists that worked on overhauling the existing tileset. And then yes, in the meantime, we have other designers, programmers, artists, working on what Railjack - now Empyrean - will become. So yes, two teams.

What can you tell us about Empyrean today that we didn't already know from the Railjack announcement?

I assume it's going to be possible to be a solo player in your own clan, correct?

Absolutely, yeah, you can do it solo. But if you want to be with other people, you can do that just as well.

Ok, let's get into a few community questions. Are the Railjacks going to be modular items in Empyrean?

Right now we do have a lot we're going to be showing at Tennocon in regards to upgrading and customizing your Railjack but I can't say too much yet. One thing I can say because I know a lot of players are going to be asking this is how the ownership of the Railjack works.

Because if you're in a clan you have one dry dock, so whose Railjack is this? If it was you and I in a clan together, it's always your own Railjack. So I'm always upgrading Rebecca's Railjack, whereas Alessio is upgrading Alessio's Railjack. Whatever you put in it in terms of modules, weapons, that's your choice. My choice is mine. And it's our own ship. So there's no sharing of the Railjack itself, you just sharing that dry dock room because Warframe is all about your gear and your ownership. It's important to players know that that's how that part is going to work.

We'll talk more about the systems at Tennocon, so I can't say too much, but there is also a desire to be able to bring, you know, your big guns to my Railjack. So we'll talk about that later. Spoilers!

What's the next step in your planned melee system upgrade?

Well, this is probably the most like new ground for Warframe's combat that I've seen in development because what we're going to try and do is bring the existing hero moments. Right now if you blinded me if they're stealth, you can do a finisher on them. So this already exists in the game, you go behind an enemy, you hit your melee button, and you can kind of finish them off. But we're going to do it in a way that changes the camera angle and gives you a cinematic moment there. It's taking that existing gameplay and making sure that it fits into the Warframe pace of combat, but doing it in a way that's rewarding, stylish, maybe even cooperative, if your friend can jump in on the finisher with you. We'll make sure that all the weapons get rebalanced as a part of that because one thing we didn't do with our weapon melee rework was to balance them, so that's gonna have to happen.

Are there any plans to revisit old game modes and scaling?

If you followed Update 25, we released a brand new game mode. It's endless and the reward scaling is completely new. And I think that's a pretty clear indication of our intent of endless game modes going forward. And the major thing about this is we're going to be taking in that game mode, Disruption, and applying it to past systems like sorties, arbitrations, relic missions will all get a version of Disruption. So we're bringing it to existing reward systems and then we'll be taking a look of course at arbitrations.

It's likely too soon to talk about this, but after Empyrean drops this year, is there a desire to do another open world zone for next year?

Yes, I think we do. It's a totally different flavor. I think the characters and the art and the scope of Fortuna all just blew our players away. We've expanded on it five or six times since release. So what it launched with in November is even now different than what it was when we did our update earlier this year. We've already expanded the open world to include another boss fight, more Warframes and you know, it's never stopping.

Warframe has a lot of fans and an ever-growing player base. How has it been like for you to watch this evolution?

There are a lot more people to deliver expectations to and we are fully committed to it because we've been doing this now for seven years. So when we first started, I remember when our database was 2000 users. And now I know our database is 50 million. So for me, you know, whether it's one person or 50 million people, we want them to be a part of our story. We want them to understand how we develop the game, which is why we do so many frequent dev streams. And we want them to know why and how we make our choices. And we want to still surprise them. We want to bring them something enticing, like space combat, but doing it the right way. And we're just glad that they're hyped for our journey.

You've also launched the game on Nintendo Switch a while ago.

Yes, it's been our highest review score yet!

Are there any chances you might look into porting the game on mobile devices as well for platforms like iOS and Android?

Honestly, I've been watching mobile announcements for the past year, I've been watching games launching there. And I think for me, I would love it if it was possible. And I'm sure somewhere, there's a mobile game studio knocking on our door saying 'Hey, we could do it!' So if that day comes it would be awesome, but otherwise, you know, we'll have to wait and see.

Makes sense. Earlier this year, I watched one of your streams. One of the community questions was about cross-play and you said it was going to be hard, but maybe cross-save could be possible. Any update you can provide on that for Empyrean or beyond?

If our Devs were genies and I could get one wish granted, it would be cross save, it's my biggest want. It's the communities', too. There are so many people where their friends play on the Switch and their other friends play on PC, being able to bring your account around would be the dream. I am extremely committed to finding a way to make it happen with our team. And it's just a matter of announcing it when we're not just praying. And we're actually like, yeah, we got to have the plan, we have our vision, we know what we want to do. It's just a matter of actually doing it. And if you're in our community, you know the difference between us saying something and us releasing something. It's huge, we want to do it so badly. Me front in line, because I travel so much, so having my Switch with everything from my main account, that's like my dream.

Another question I had is about your long relationship with Epic. You've even worked alongside Epic on Unreal and Unreal Tournament at the beginning of the history of Digital Extremes. Any chance we might see Warframe on the Epic Games Store too?

I think for us, we're free to play, so the more places we are, the stronger we can be. It's just a matter of having that conversation with them and seeing what our options are. At Epic they've been launching tremendous games. I mean, today's PC Gaming Show is sponsored by them, so everything you saw at least had a chance to be on the Epic Games Store. More Warframe is good for everyone, I think. The doctor ordered it!

Another big topic at this year's E3 is the advent of game streaming via the cloud. Would you like to port Warframe to Google Stadia, for instance?

I would love to support it. Again, the more Warframe the better. Our game is free. There's no barrier to entry for any platform that it exists on right now. So we already have four spots of the gaming market that you can just download Warframe from and adding to that list would be incredible. The entire cloud based gaming principles and experience I think are going to be mental the next year, it's going to be incredible to see what happens and if we're part of that, then hell yeah!

Okay, so one last question. I wanted to check about the progress on the Xbox One X enhancements that were promised some time ago. Are those still in the plans?

Yeah, I have nothing to announce on that right now. But we are going to be overhauling the way we render Warframe overall so the Xbox One in particular along with all platforms will be getting a much better-looking game soon just based on our own core engine tech that's going to improve, bringing a better graphics experience on all platforms.

What about High Dynamic Range (HDR) display support? Is that coming too?