Gaijin Entertainment announced today that their flagship product War Thunder is getting soon a significant update to its Dagor Engine. 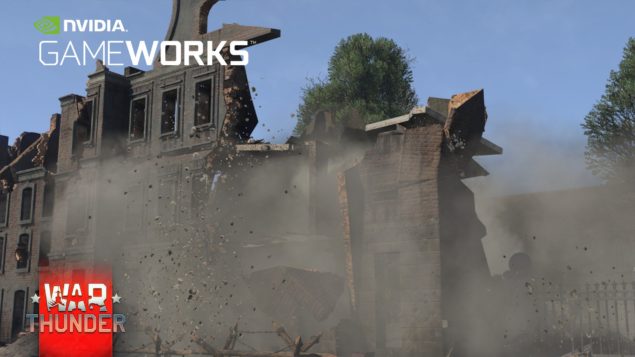 First of all, Physically Based Rendering is being added to the game:

The technical advancements of this engine allows War Thunder to correctly interpret the way light interacts with objects within its environment, including the diffusion and reflection of light on shiny and opaque surfaces and materials such as wood, steel, rubber and glass. In short, it means that War Thunder will look even more realistic than ever before.

Moreover, a couple NVIDIA GameWorks features are being added to War Thunder. Specifically, destruction and WaveWorks:

Gaijin has also been working closely with NVIDIA to introduce NVIDIA GameWorks technologies into the game. War Thunder’s quest for increased realism is further enhanced with the introduction of larger destructible objects to the game: wall fragments, ruins and entire buildings will all react to in-game ballistic physics. Players now have the ability to destroy an enemy’s cover or create new firing positions, changing the dynamics of tank battles.

The inclusion of NVIDIA Waveworks technology will generate incredibly realistic waves and foam for oceans, seas, rivers and lakes which will also factor wind direction and strength. An interesting fact is that this technology provides water surfaces the ability to interact with other game objects and players. All of the maps in the game will benefit from this addition, aerial and ground combat ones alike.

An interesting thing is that since some of these additions actually affect gameplay (if someone destroys a wall, it will disappear for all players in the battle), Gaijin has promised that they will work on all supported platforms and configurations. That should include even PlayStation 4, especially because War Thunder has been the first game to feature cross-platform functionality between PC & PS4.

Check out some screenshots and a trailer for this upcoming update below.