Windows 10 for desktops is full of new features and the latest build for desktop computers shows the enhanced features that Cortana is capable of. We have added videos to show you how Cortana works in regards to taking care of several tasks for users.

Software giant Microsoft is currently improving the way that users interact with the company’s latest platform. The latest update in the firm’s mission in augmenting the user experience is allowing Windows Phone owners to text via Cortana on the desktop. In addition, Windows 10 Build 10565 for desktops also includes an option to alert you when you miss a phone call, but it does not work on the latest mobile build. However, it does work on more recent internal builds and WinBeta was able to showcase how exactly the features work. 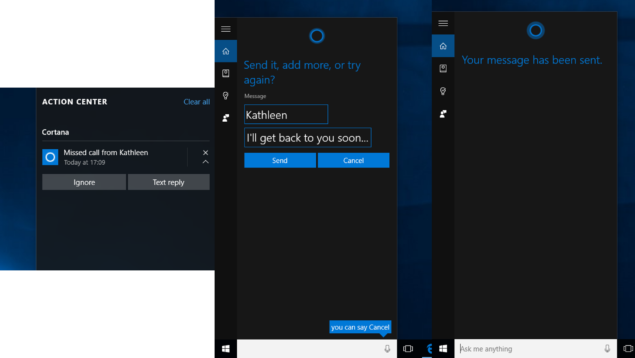 As stated earlier, the feature is not currently available in public builds, but it will eventually make its way to Insiders before Threshold 2. According to the source, sending a text is an effortless process and can be done through voice or typing function, whatever suits the user more.

After the text has been sent, it will appear on the phone, and the recipient who was support to receive the text will also find it in their inbox. If this was not flexible enough, then Cortana for desktop users will also be able to provide you with alerts if you miss a phone call. The notification pops up like a regular one, and will provide you with two options. Either you can choose to ignore the notification, or send a reply to the individual who has called you.

The video given below shows the entire process and how cool this feature. Do view the video and tell us what you think about these two nifty features.