Last year’s Resident Evil 2 remake was a bit of a layup for Capcom. The original RE2 is one of the most impeccably-designed games of all time and the remake largely succeeded by sticking to the blueprint. Revamping Resident Evil 3 is a more challenging prospect, as the original game had some great ideas, but arguably wasn’t a great game overall. Resident Evil 3 also leaned more heavily toward action, which the franchise has had a mixed track record with.

It’s one thing to remake an undisputed classic like Resident Evil 2, but has Capcom managed to transform the middle-tier Resident Evil 3 into something special? Or will RE3 never be one of the staaaars of the franchise? Grab those green herbs again, it’s time for another trip to Raccoon City…

For those new to Resident Evil 3, the game is actually a prequel, taking place both slightly before and during the events of Resident Evil 2. You play as the Master of Unlocking herself, Jill Valentine, who must escape a fully-zombified Raccoon City with the help of the last surviving members of Umbrella’s mercenary squad, the UBCS, some of whom definitely know more about what’s happening than they let on. Oh, and Jill’s also being stalked by a big, ugly, superpowered bioweapon with a one-track mind for destroying former STARS members. Not exactly the most relaxing story to tackle during the COVID-19 pandemic, but hey, sometimes it’s best to face your anxieties head-on…with a rocket launcher.

Unlike the Resident Evil 2 remake, which made only minor tweaks to the original game’s structure, Resident Evil 3 gets pretty ambitious with its remixing. The broad strokes are the same, but new character moments are added, events are shuffled, entire sections are axed (say goodbye to the Clock Tower and Park), while others are significantly expanded (the Hospital, Sewers) or created from scratch (I won’t spoil it). Even sections that aren’t complete overhauls are still far from one-to-one remakes -- the narrow, claustrophobic Raccoon City streets from the original RE3 are now far more open and packed with new sights and secrets, and your return trip to the Police Station is turned on its head as you now play through the section as Carlos instead of Jill.

Make no mistake, while a lot has changed, Resident Evil 3 still delivers plenty of nostalgic nods. Memorable supporting characters, like that poor sap who hides in the shipping container at the beginning of the PS1 game, pop back up when you’re not expecting them. Boss fights take concepts from the original game and expand on them to the Nth degree. And yes, Jill drops her infamous “I’ll give you STARS!” quip, but this time you don’t have to wait until the end of the story to hear it. The game also contains some juicy new bits of backstory for Resident Evil 2 that hardcore fans ought to gobble up.

Resident Evil 3’s revamped story is elevated by fantastic RE-Engine-powered visuals. The new Jill is one of the most detailed, expressive character models I’ve ever seen, and Carlos, Nikolai, and other supporting cast members have received similarly-impressive upgrades. The somewhat dreary look of the Resident Evil 2 remake has given way to a more varied array of locales, with the bright neon-lit streets of Raccoon City standing out as particularly unique. You could argue Resident Evil 3 isn’t quite as atmospheric as some previous entries in the series, but that’s okay, as the game isn’t going for straight horror.

As mentioned, the original Resident Evil 3 was more action-oriented than its PS1 brethren, and the remake expands on that. Thankfully, this game is closer to Resident Evil 4 than, say, Resident Evil 6, as it delivers plenty of thrills without entirely abandoning the scary stuff. While basic movement and gunplay is lifted from the RE2 remake, Jill and Carlos can now skillfully dodge around enemies. Hit the button at just the right moment and you’ll pull off a “perfect dodge,” which rewards you with a couple of seconds of slow motion that can be used to pop off a few precision headshots. Master the perfect dodge and you’ll be able to make RE3’s zombies look dumber than they already are.

Of course, you’ll be facing enemies a lot more capable than zombies in Resident Evil 3. Nemesis clearly borrows his AI from the RE2 remake’s “Mr. X” Tyrant, but he has some new tricks, including the ability swing in and out of areas on a whim, leap across wide distances, and snatch you up with his tentacles. Nemesis is basically a very ugly Spider-Man, although all his powers don’t necessarily make him any more challenging or intimidating than Mr. X. The openness of RE2’s police station and not knowing when or where Mr. X might appear was what made him so unnerving, but RE3 is a much more linear game. There’s really only one section of the game (relatively early on the streets of Raccoon City) where Nemesis stalks you freely, providing that heart-pumping cat-and-mouse intensity. The other times you encounter ol’ gruesome, it’s in Uncharted-style cinematic action scenes and boss battles. Don’t get me wrong, these encounters are still fun -- the scripted action scenes are gripping and the boss fights are probably the best I’ve ever encountered in a Resident Evil game, they’re just not scary.

But don’t worry, while Resident Evil 3 mostly plays its Nemesis encounters for action-movie thrills, the game’s not without its horrific moments. I’ll admit, I screamed out loud a couple times during the Hospital stage, and a sequence where Jill has to navigate through a nest of parasites eager to plant their eggs in her stomach is downright disgusting. This is perhaps the best-paced Resident Evil game ever (or at least tied with RE4), as Capcom serves up the perfect mix of scripted action scenes, more traditional survival-horror, character bits, and epic boss battles. I wanted to savor my time with Resident Evil 3, but I ended up devouring the whole story over a mere two evenings.

Which brings us to Resident Evil 3’s biggest shortcoming, namely, it’s shortness. Depending on how often you die, it should take you around 7 to 10 hours to get through RE3, and unlike the original game, there are no branching paths or multiple endings to pursue. There isn’t a second quest to play through with another character as in RE2 either. Yes, there are multiple difficulties and things to unlock, but once you finish the game once you’ve pretty much seen all the content it has to offer. Ah, but what about Resident Evil Resistance, the Left-4-Dead-style multiplayer game included with your RE3 purchase? Surely that makes up for the main game’s briefness? Well, I’ll have a full review of RE Resistance later this week, but for now I’ll say, don’t buy this game for anything but the single-player. Multiplayer is a minor bonus, at best. Thankfully, Resident Evil 3 still kicks plenty of ass, even without RE Resistance as a crutch.

This review was based on a PS4 copy of Resident Evil 3 provided by publisher Capcom. You can grab a copy of the game on Amazon. 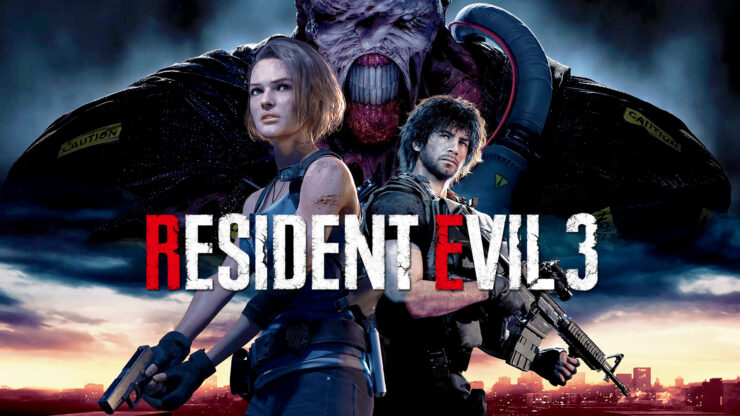