It was revealed a few months ago that AMD was preparing an updated Tahiti XTL variant of their longest Tahiti chip. It looks like several vendors which include MSI, PowerColor and Sapphire have started to integrated the new core inside their custom Radeon R9 280X cards. 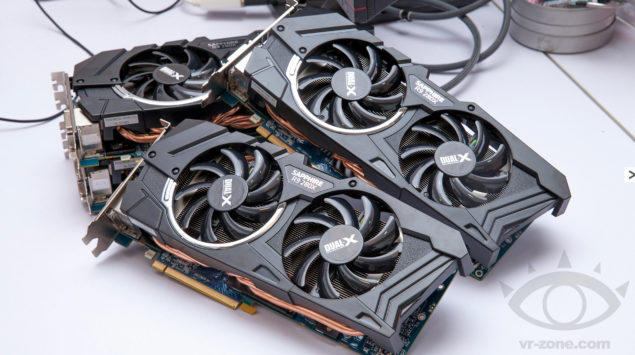 VR-Zone managed  to obtain samples of the Radeon R9 280X with the Tahiti XTL core which features the same 2048 Stream processors, 128 TMUs, 32 ROPs and a 3 GB GDDR5 memory running across a 384-bit memory bus. The clocks are maintained at 870 MHz base and 1050 MHz boost while the memory is clocked at 6.0 GHz clock speed (effective). The Sapphire Radeon R9 280X Dual-X supports the Dual-X dual-slot cooler with two fans which push air towards the internal heatsink.

The site has mentioned that the Tahiti XTL core has better performance compared to the Tahiti XT core and features improved power efficiency. AMD was already planning to do a running-change with the Radeon R9 280X and offer the Tahiti XTL variant without anyone knowing that the chip has actually been released. No new naming or branding scheme would be introduced by manufacture’s or AMD to differentiate between the Tahiti XTL and Tahiti XT2 based Radeon R9 280X graphic cards which will end up causing slight bit of confusion among the consumer market.

AMD had delayed the Tahiti XTL chip for the Radeon R9 280X since they had alot of Tahiti XT2 chips in stock and the new XTL variant wasn't manufactured in a large quantity until now. The pricing structure of the Radeon R9 280X will remain unaffected at $299 for reference and $299 + for non-reference cards. Performance numbers shown by VR-Zone only give a glimpse at the CrossFireX performance and no actual difference between the XT2 and XTL chips is shown so we still have to wait until more reviewers get their hands on the new chip based card and reveal the actual improvements.