Valve has officially announced their own SteamOS operating systems based on the Linux OS with big screen integrated for a whole new gaming experience. The new SteamOS is one of the three announcements that VALVE is going to announce over this week. Probably the best thing about the announcement is that the SteamOS would be available to gamers for free.

There are several features that make SteamOS stand tall against other competitors which includes the never ending library of Steam games, developers optimizing experiences for SteamOS and Valve exclusive titles based on Source Engine and four great features which include the ability to stream games on large screen TVs from a Windows or Mac OS through your SteamOS machine.

As we’ve been working on bringing Steam to the living room, we’ve come to the conclusion that the
environment best suited to delivering value to customers is an operating system built around Steam itself.
SteamOS combines the rock-solid architecture of Linux with a gaming experience built for the big screen.
It will be available soon as a free stand-alone operating system for living room machines.

Finally, you don’t have to give up your favorite games, your online friends, and all the Steam features you love just to play on the big screen. SteamOS, running on any living room machine, will provide access to the best games and user-generated content available.

In SteamOS, we have achieved significant performance increases in graphics processing, and we’re now targeting audio performance and reductions in input latency at the operating system level. Game developers are already taking advantage of these gains as they target SteamOS for their new releases.

Steam is not a one-way content broadcast channel, it’s a collaborative many-to-many entertainment platform, in which each participant is a multiplier of the experience for everyone else. With SteamOS, “openness” means that the hardware industry can iterate in the living room at a much faster pace than they’ve been able to. Content creators can connect directly to their customers. Users can alter or replace any part of the software or hardware they want. Gamers are empowered to join in the creation of the games they love. SteamOS will continue to evolve, but will remain an environment designed to foster these kinds of innovation. 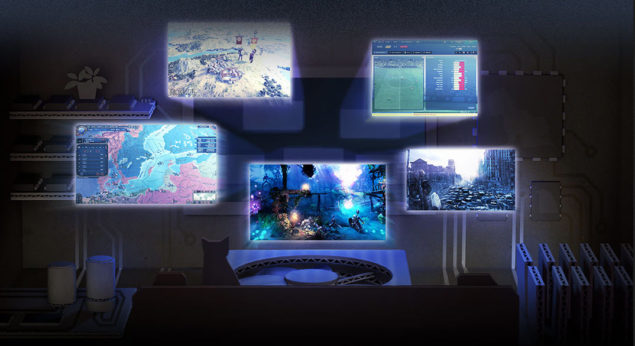 Available soon in both SteamOS and the Steam client.

We’re working with many of the media services you know and love. Soon we will begin bringing them online, allowing you to access your favorite music and video with Steam and SteamOS.

In the past, sharing Steam games with your family members was hard. Now you can share the games you love with the people you love. Family Sharing allows you to take turns playing one another’s games while earning your own Steam achievements and saving your individual game progress to the Steam cloud.

The living-room is family territory. That’s great, but you don’t want to see your parents’ games in your library. Soon, families will have more control over what titles get seen by whom, and more features to allow everyone in the house to get the most out of their Steam libraries.