How To Use iPhone, iPad As AirPlay Speaker

Here's how you can use your iPhone, iPad or iPod touch as an AirPlay enabled speaker.

We're quite certain that there are a lot of iOS users out there that have a spare iPhone, iPad or iPod touch lying around and is most certainly eating dust because they can't find a good use for it. But did you know that you can transform that otherwise useless device into an AirPlay enabled speaker? That's right, you can do exactly what we said a line back, and all can be done using a jailbreak tweak that is available from none other than Cydia.

Once you have downloaded and installed a tweak called AirSpeaker, there's absolutely nothing to configure or do, except that you have the option to place a passcode for AirPlay access from the Settings app. There's not even an app to run for that matter, making things as simple as they can be. But keep in mind that once the device goes to sleep on battery power, or is turned off of course, then you will lose AirPlay capabilities altogether. Therefore it's recommended that you keep your device plugged in to an AC power outlet in order to keep the ball rolling.

You'll also be pleased to learn that AirSpeaker works on iOS 6 all the way up to iOS 9, as well as 64-bit devices. Furthermore, it works on iPhone and iPad both, as we mentioned at the start, which is a huge bonus point if you're asking us.

While the iPhone and iPad might not have the best speakers in the world in terms of sound quality, but this tweak is a perfect way to make good use of an old iOS device, or maybe your current one, depending on how you look at the use case. Or, you can hook up your old iOS device with a pair of 3.5mm speakers and redirect the sound for an even better experience. 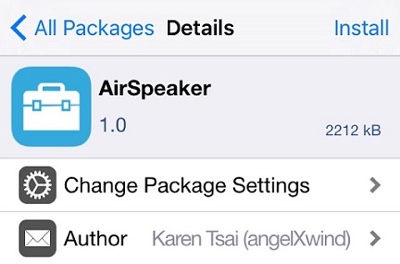 The AirSpeaker tweak is not available to download from the usual default repositories in Cydia, therefore you might want to toss in the extra effort of adding the following repo in order to approach the download page: https://cydia.angelxwind.net/

Once you've added the repository in Cydia, simply perform a search for 'AirSpeaker' and you're golden. And if you do happen to take the tweak for a spin on your iOS device, then be sure to let us know in the comments section below what you think about it.