Owing to easy access to labor and cheaper wages, the bulk of US' tech products are manufactured inside China. Not only American companies, but even Chinese companies export their products to the United States. And US farmers find China's large market a great destination for their products. The relationship between the two, as you can see, is symbiotic. But while all this looks great on the surface, tensions between the two powers have simmered for the course of this year.

China views American attempts to impose tariffs on its exports and moves such as limiting Huawei from conducting business normally with US companies at attempts to hurt the country's growing economic power. The US, on the other hand, views China's disregard of intellectual property as an attempt to build itself on American achievements. Now, both countries might be nearing a truce in what's been dubbed as a 'trade-war' reports the Financial Times. Take a look below for more details.

US Considering Rolling Back 12.5% Levy On $112 Billion Chinese Goods Later This Month

The US and China are set to sign a truce to their trade war later this month, and now, it's looking as if China can breathe a sigh of relief. According to people who were briefed on the negotiations between the US and China, the US is considering to rollback the tariffs that it introduced on $112 billion worth of Chinese imports in the start of September.

These imports include clothing, appliances and flatscreen monitors. However, the sources caution that while officials within the White House are considering this rollback, President Trump's stance on the matter is unclear. The move of removing tariffs is likely to be perceived as a weakening of the hard-hitting rhetoric that the president has taken with China, especially since it will come after Washington caved into demands from Chinese negotiators to not increase tariffs to 30% from 25% on $250 billion worth of Chinese goods. 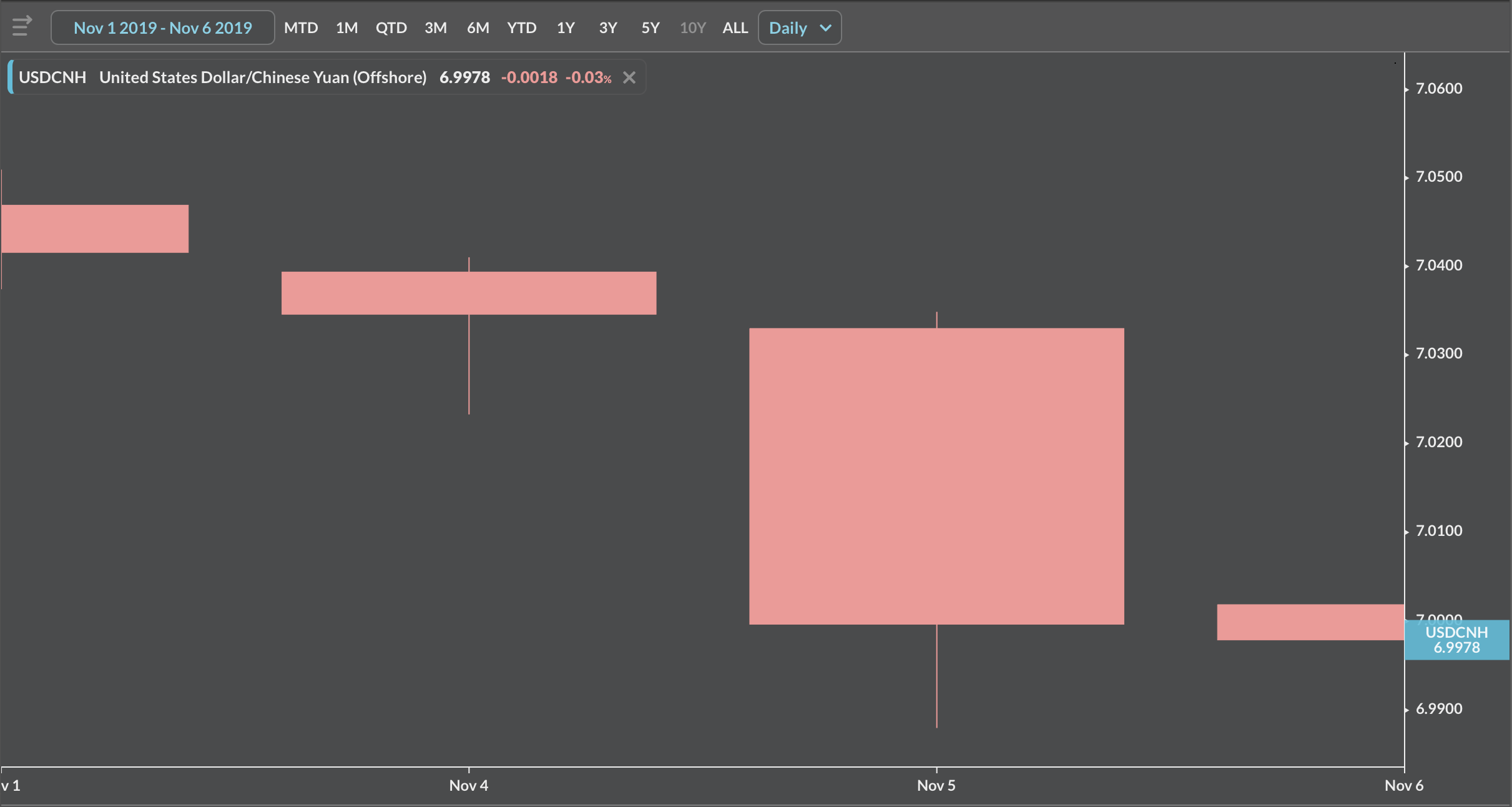 Chinese Yuan opened at 7 to a dollar before dropping slightly.

While the US is considering to drop the levies, it'll also ask for major concessions from China in return. The first is likely to be a guarantee from the Asian country to import US farm exports. These exports are critical to President Trump's voter base, and China has used to as a bargaining tool on the negotiation table. The second will be improved protection for American firms' intellectual property - especially for those who are operating in China right now. China's new foreign investment bill that will take effect from 2020 is designed to prohibit a forced transfer of intellectual property from foreign companies operating in the country.

Rolling back the tariffs is likely to draw criticism from Democrats, especially as President Trump heads into the election seasons next year. The President has built his campaign on reducing US' Chinese trade deficit, Cutting back tariffs and levies will reverse this, at a time when the President should be hoping for re-election.