The next-generation consoles are almost upon us, and Epic’s industry-standard Unreal Engine is ready to deliver a new level of graphic fidelity. Unreal Engine 4.25 is available today, and it includes initial support for the Xbox Series X and PlayStation 5. In addition to that, real-time ray tracing and Niagara VFX have now left beta and are fully production ready, and new features have been added to the Chaos physics and destruction system. You can check out a quick rundown of some of the major new features included in Unreal Engine 4.25, below. 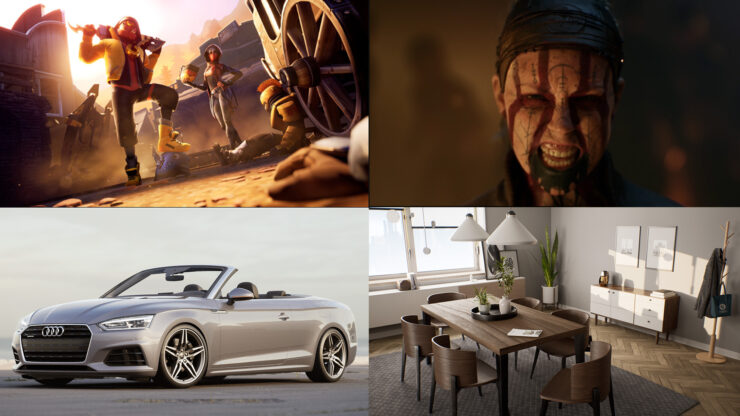 Unreal Engine 4.25 delivers initial support for Sony’s PlayStation 5 and Microsoft's Xbox Series X as first-class platforms, and throughout the year we will be updating the 4.25-Plus branch with optimizations, fixes, and certification requirements to support developers launching on the next generation of consoles. Features include platform-specific functionality, such as new audio advancements, initial support for online subsystems, and early support for TRC and XR certification requirements.

The Niagara visual effects (VFX) system is now production-ready. The Niagara VFX system is battle-tested for use in a variety of scenarios—from generating effects used in Fortnite to high-end technical demonstration projects and virtual production for TV and film. The user interface is more polished and easier to use, performance and scalability are significantly improved, and we added new features such as audio data interfaces, particle-to-particle communication, and more.

With this release, we're excited to announce that Unreal Engine's ray tracing features are now ready for production! Development has continued over the past several releases to get us to this state, and we'll continue to add new features and improve existing ones while maintaining stability and performance.

This release sees marked improvements and additions to our material shading models with support for anisotropic properties, true tinted translucent materials with physically accurate properties, and an improved Clear Coat shading model that exhibits a physically accurate response to punctual lights. These improvements are ideal for those creating materials for automotive and architectural visualization and for media and entertainment.

The Chaos physics system is now in active use on shipping seasons of Fortnite and supports the following features:

If you’re a developer or tech head who needs to know every little thing about Unreal Engine 4.25, you can get the full, unabridged patch notes, right here.

It will certainly be interesting to see what Unreal Engine can do on next-gen platforms. What little we’ve seen of Unreal-based games like Senua’s Saga: Hellblade II and Godfall has definitely been impressive. What new Unreal Engine features are you excited to see in action?