Here’s How to Unlock your Mac using Apple Watch

As the saying goes, there's more than one way to skin a cat; in the digitally-charged world we find ourselves in, though, the adage should perhaps be changed to: there's more than one way to unlock a Mac. Okay, so while that wasn't particularly funny, a famed app that does provide a novel alternative to the art of Mac-unlocking has just been updated to incorporate the Apple Watch. 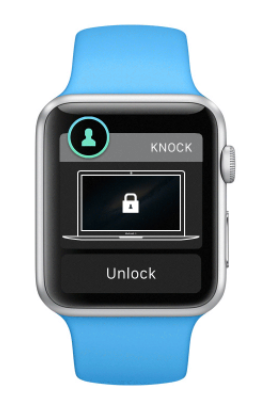 If you're not familiar with Knock, it's a fairly long-standing iPhone app that makes it a touch easier to unlock your Mac. Touch being the operative word; you simply tap on your iPhone's display, and your Mac is unlocked as if by magic.

It's thoroughly convenient, and courtesy of an update to version 2.0, also drafts in the assistance of the Apple Watch. The device is still very much a toddler compared with other, more established products from Apple, but it has already cemented its position as the leader of the pack with pre-orders outstripping Android Wear sales for the entirety of last year, and therefore, a large quantity of developers are paying attention and creating apps specifically for the new Apple Watch.

Knock is one of the many apps to start a life on iOS and extend its arm, quite literally, to Apple Watch. But aside from allowing users to tap on the Watch display to unlock their Mac, Knock 2.0 also adds a couple of other features and functions worth mentioning.

For example, OS X includes Admin controls that require password entry before apps are installed and preferences are changed, and although Touch ID has been a feature of iOS for a couple of years now, there's not a similarly effortless way to bypass these everyday prompts on Mac without lowering security. But with Knock, you can also set your iPhone / Apple Watch to quickly tap away these notices, and proceed with using your Mac without the unwelcome interruption.

In our constant haste to save time, we're often lax with our passwords and authentication methods, seeking to use codes and phrases that are easy and convenient to type. But this is very problematic, since the easier something is to remember and replicate, the more likely you are to have your device infiltrated by an unwanted entity.

Thanks to Knock, you have the best of both worlds, with your iPhone and Apple Watch offering a two-level security blanket that boasts strong protection, but can also be inputted without making you re-type those lengthy, unique, alphanumeric passphrases that you really, really should be looking to use at all times.

So, if you want to unlock your Mac with Apple Watch, the Knock app will see you through, and while it costs $3.99, it's definitely worth the money.